Cristian Măcelaru, JoAnn Falletta, and Christian Reif will guide the ensemble through a diverse and challenging repertoire of classical favorites and contemporary masterworks. 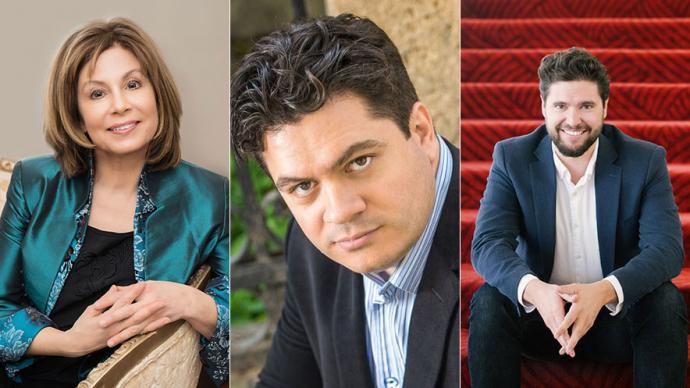 Interlochen Arts Camp is thrilled to announce the conductors and repertoire highlights for the 2021 World Youth Symphony Orchestra.

There is limited space available in the high school Orchestra & Wind Symphony program as Interlochen Arts Camp enrollment has been reduced by 50% as part of the Summer 2021 Protocols. We highly encourage those who are interested to apply now.

For more information about the application process, contact Interlochen’s Office of Admission and Financial Aid at 800.681.5912 or 231.276.7472 or admission@interlochen.org.

JoAnn Falletta serves as Music Director of the Buffalo Philharmonic Orchestra and the Virginia Symphony Orchestra, Principal Guest Conductor of the Brevard Music Center, and Music Advisor to the Hawaii Symphony. She has been acclaimed by The Washington Post as having "Toscanini's tight control over ensemble, Walter's affectionate balancing of inner voices, Stokowski's gutsy showmanship, and a controlled frenzy worthy of Bernstein."

Falletta has guest conducted over 100 orchestras in North America, and many of the most prominent orchestras in Europe, Asia, South America, and Africa. Recent guest conducting highlights include performances with the National Symphony at Wolf Trap, the RTE Concert Orchestra (Dublin), the New Japan Philharmonic, the Mexico Symphony Philharmonic, the National Orchestras of Peru, Columbia and Iceland; debut performances in Belgrade, Gothenburg, Lima, Bogotá, Helsingborg, and the Orchestra of St. Luke's; a European tour with the Stuttgart Orchestra; return engagements with the Warsaw, Detroit, Phoenix, and Krakow Symphony Orchestras; and a 13-city United States tour with the Irish Chamber Orchestra with James Galway.

Upon her appointment as Music Director of the Buffalo Philharmonic, Falletta became the first woman to lead a major American ensemble. She has since been credited with bringing the Philharmonic to a new level of national and international prominence. The orchestra has become one of the leading recording orchestras for Naxos and returned twice to Carnegie Hall, first in 2004 after a 20-year absence, and again in 2013 as part of the Spring for Music Festival. In 2018, the BPO made their first international tour in three decades, to perform at Warsaw's prestigious Beethoven Easter Festival where Falletta made history as the first American women conductor to lead an orchestra at the Festival. Other accomplishments include the establishment of the orchestra's Beau Fleuve label, the founding of the JoAnn Falletta International Guitar Concerto Competition in partnership with WNED, and the national and international broadcast of concerts on NPR's Performance Today and SymphonyCast and the European Broadcasting Union.

With a discography of 115 titles, Falletta is a leading recording artist for Naxos. Her discs have won two GRAMMY® Awards and received ten nominations. In 2018, Naxos released four recordings with Falletta: Wagner: Music from Der Ring del Nibelugen with the BPO; Franz Schreker: The Birthday of the Infanta—Suite with the Berlin Radio Symphony Orchestra; Kodaly: Concerto for Orchestra with the BPO; and her fifth world-premiere recording of music of Kenneth Fuchs with the London Symphony. Upcoming albums include Respighi's Rome Trilogy with the BPO to be released by Naxos in February 2019.

Falletta is a member of the esteemed American Academy of Arts and Sciences, has served as a Member of the National Council on the Arts, and is the recipient of many of the most prestigious conducting awards. She has introduced over 500 works by American composers, including well over 100 world premieres.

She received her undergraduate degree from the Mannes School of Music, and her master's and doctorate degrees from The Juilliard School. When not on the podium, Falletta enjoys writing, cycling, and yoga, and is an avid reader.

Newly appointed Chief Conductor Designate of the WDR Sinfonieorchester, Cristian Măcelaru is one of the fast-rising stars of the conducting world. He takes on this new position at WDR, one of Europe's leading orchestras, effective with the 2019-20 season.

Măcelaru is Music Director and Conductor of the internationally renowned Cabrillo Festival of Contemporary Music. In August 2018, he led his second season in premiere-filled programs of new works by an esteemed group of composers. Among the 2018 season's highlights were three world premieres, a record-breaking 16 composers-in-residence, a stunning roster of international guest artists, and two special tributes to commemorate William Bolcom's and John Corigliano's respective 80th birthdays.

A particularly close collaboration connects him with the Philadelphia Orchestra: Since his subscription debut in 2013, he has been on the podium of this orchestra over 100 times and served there for three seasons as Conductor-in-Residence. Prior to that, he was their Associate Conductor for two seasons and Assistant Conductor for one season. He continues a close relationship with the orchestra in leading them on annual subscription programs and other special concerts.

Highlights of the 2018/19 season included appearances in New York at Lincoln Center’s Mostly Mozart Festival with the International Contemporary Ensemble and as part of the Metropolitan Museum of Art’s MetLiveArts series on a new chamber version of John Adams’s El Niño with the American Modern Opera Company. Other recent debuts included the Hong Kong Philharmonic, National Symphony Orchestra in Washington D.C., St. Paul Chamber Orchestra, Staatsphilharmonie Rheinland-Pfalz, Brucknerorchester Linz and at Opera San Jose on a production of Leoncavallo’s Pagliacci.

Reif was a Conducting Fellow with the New World Symphony from 2014 to 2016, and a Conducting Fellow at the Tanglewood Music Center in the summers of 2015 and 2016. During his time at Tanglewood, he stepped in for Seiji Ozawa to conduct the Seiji Ozawa International Academy Switzerland, and he led the TMC Orchestra in Shostakovich’s 14th Symphony with soprano Dawn Upshaw, baritone Sanford Sylvan and TMC vocalists.