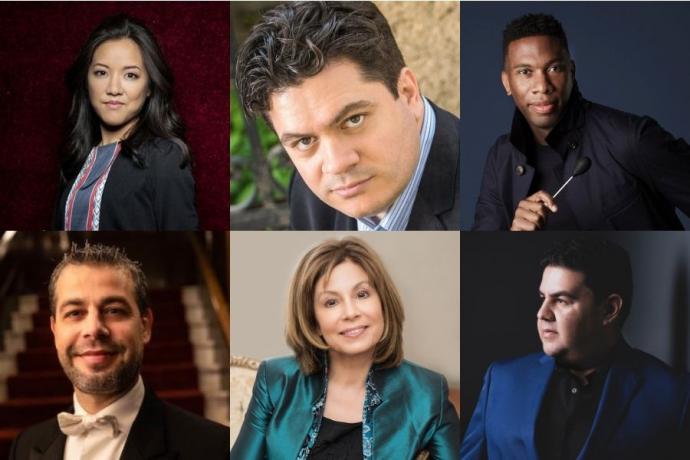 Interlochen Arts Camp has announced the conductors and repertoire for the 2022 World Youth Symphony Orchestra, the program’s flagship ensemble.

An alumnus of Interlochen Arts Academy, Cristian Măcelaru currently serves as music director of the Orchestre National de France in Paris, chief conductor of the WDR Sinfonieorchester, and music director and conductor of the Cabrillo Festival of Contemporary Music. In 2020, Măcelaru conducted the Grammy Award-winning recording of Wynton Marsalis’ Violin Concerto featuring soloist Nicola Benedetti and the Philadelphia Orchestra.

Jader Bignamini joined the Detroit Symphony Orchestra in 2020 as the ensemble’s 18th music director. A native of Crema, Italy, Bignamini began his career as a clarinetist before discovering his passion for conducting. Since his professional conducting debut at age 28, Bignamini has conducted some of the world’s most acclaimed orchestras and opera companies in venues across the globe, including the Osaka Philharmonic, Metropolitan Opera, and Dallas Symphony.

Winner of the 2018 Sir Georg Solti Conducting Award by the U.S Solti Foundation, Roderick Cox has been praised as a “trailblazer…a conductor who will be amongst the vanguard” (Minnesota StarTribune). The former associate conductor of the Minnesota Orchestra, Cox has recently appeared with the New World Symphony, Cincinnati Symphony Orchestra, Los Angeles Chamber Orchestra, BBC Philharmonic, and numerous other ensembles.

Grammy Award-winning conductor JoAnn Falletta serves as music director of the Buffalo Philharmonic Orchestra and the Virginia Symphony Orchestra; principal guest conductor of the Brevard Music Center; and artistic adviser of the Hawaii Symphony Orchestra. A graduate of the Juilliard School, Falletta has released more than 115 recordings, conducted well over 100 world premiere performances, and served as a member of the National Council on the Arts during the Bush and Obama administrations.

Currently the Virginia G. Piper Music Director of the Phoenix Symphony, Tito Muñoz has appeared with many of the world’s most prominent orchestras, including the Frankfurt Radio Symphony, BBC Symphony Orchestra, Detroit Symphony Orchestra, and National Symphony Orchestra. A passionate educator, Muñoz has led performances at the Aspen Music Festival, Boston University Tanglewood Institute, and Music Academy of the West and maintains a close relationship with Arizona State University, where he has held a faculty position and is a frequent guest teacher and conductor.

Repertoire for the season will include:

Conductors and repertoire for the program’s other three ensembles—the Interlochen Philharmonic, World Youth Wind Symphony, and Interlochen Wind Ensemble—will be announced at a later date.

Applications are now open for all summer 2022 Arts Camp programs; audition requirements vary by program. The Orchestra & Wind Symphony program fills up quickly. Prospective students are encouraged to apply by the Jan. 15, 2022 priority application deadline for placement in their top-choice program.