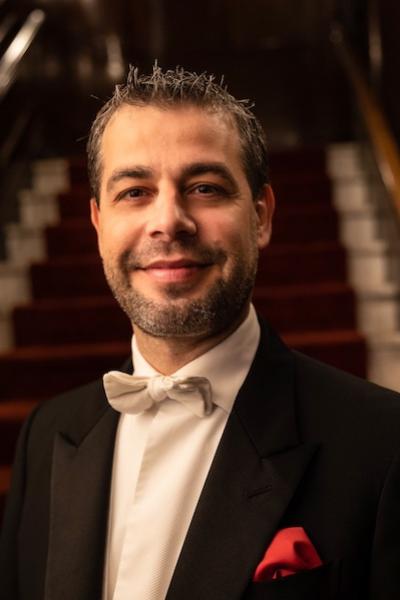 Jader Bignamini was introduced as the 18th music director of the Detroit Symphony Orchestra in January 2020, commencing with the 2020-2021 season. He began his tenure as DSO Music Director with the launch of DSO Digital Concerts in September 2020, conducting works by Copland, Puccini, Tchaikovsky, and Saint-Georges. Bignamini’s infectious passion and artistic excellence set the tone for the season ahead, creating extraordinary music and establishing a close relation­ship with the orchestra.

A native of Crema, Italy, Bignamini studied at the Piacenza Music Conservatory and began his career as a clarinetist with Orchestra Sinfonica La Verdi in Milan, later serving as the group’s resident conductor. Captivated by the symphonies of greats like Mahler and Tchaikovsky, he explored their complexity and power, puzzling out the role that each instrument played in creating a larger-than-life sound. When Bignamini conducted his first professional concert at the age of 28, it didn’t feel like a departure, but an arrival.

In the years since, Bignamini has conducted some of the world’s most acclaimed orchestras and opera companies in venues across the globe including working with Riccardo Chailly on concerts of Mahler’s Eighth Symphony in 2013 and his concert debut at La Scala in 2015 for the opening season of La Verdi Orchestra. Recent highlights include debuts with the Houston, Dallas, and Minnesota symphonies; Osaka Philharmonic and Yomiuri Nippon Symphony Orchestra in Tokyo; with the Metropolitan Opera, Vienna State Opera, and Dutch National Opera (Madama Butterfly); Bayerische Staatsoper (La Traviata); I Puritani in Montpellier for the Festival of Radio France; Traviata in Tokyo directed by Sofia Coppola; Andrea Chénier at New National Theatre in Tokyo; Rossini’s Stabat Mater at Rossini Opera Festival in Pesaro, Italy; Rossini’s Petite messe solennelle at Teatro dell’Opera in Rome; and return engagements with Oper Frankfurt (La forza del destino) and Santa Fe Opera (La Bohème).

When Bignamini leads an orchestra in symphonic repertoire, he conducts without a score, preferring to make direct eye contact with the musicians. He conducts from the heart, forging a profound connection with his musicians that shines through both onstage and off. Jader Bignamini both embodies and exudes the excel­lence and enthusiasm that has long distinguished the DSO’s artistry.