A partnership between Miami Music Project and Interlochen Center for the Arts set guitarist Bobby Bush and bassoonist Edric Alejandro Vivoni on paths to success. 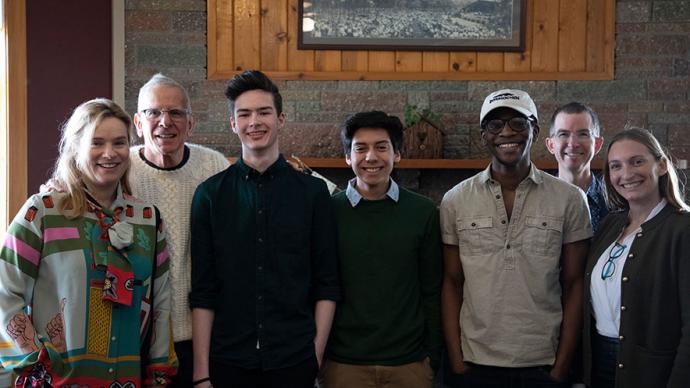 For two years in a row, the Peabody Institute of the Johns Hopkins University, one of the world’s most prestigious conservatories, has selected an Interlochen Arts Academy graduate for a full-ride scholarship.

“Interlochen provided life-changing experiences to 47 Miami Music Project camper-musicians in that first year, raising the bar for excellence and increasing skills, work ethic, and self-confidence,” Daniel Lewis said. “The campers brought all that back when they returned to Miami Music Project in the fall. They served as role models, catalyzed similar behavior changes in other student musicians, and helped increase the demand for the program.”

"Scholarship gifts from donors like Dan and Valerie change students' lives, opening doors of opportunity,” said John Bogley, vice president of philanthropy at Interlochen Center for the Arts. “The stories of Bobby and Edric are just two of many we could tell about students impacted by their generous support. The combination of talented young artists, an Interlochen experience, and financial support from generous donors is a central component of the Interlochen magic that is both our proud history—and our future.”

Bobby Bush was homeschooled along with his eight siblings his entire life, but his connection to MMP gave him a strong community outlet—which eventually led him to Interlochen Arts Camp. After his second summer in Interlochen, Bush returned home and began applying for colleges. He was accepted into several programs, but due to financial limitations, he couldn’t commit. When Interlochen offered him a scholarship to attend the Arts Academy as a post-grad student, he jumped at the opportunity.“I knew that a gap year at Interlochen would help me to get into the best schools for a classical guitarist,” he said.

At the Arts Academy, Bush performed in master classes with world-renowned guitarists including Marcin Dylla, Stephen Aron, and Thomas Viloteau. “Bobby is an unusually gifted guitarist with a big sound, impressive technical facility, and advanced performance chops,” said Matthew Cochran, Bush’s instructor of guitar at Interlochen. “It was a pleasure watching him improve his performance skills in both solo and chamber music recitals.”

For Bush, his time at Arts Academy helped him develop a sense of agency and independence. “All I knew how to do was practice, practice, practice,” Bush said. “Coming to Interlochen helped me grow up as a person, as an adult, and empowered me to make decisions for myself and take responsibility for my actions.”

At Interlochen Arts Camp, Vivoni Figueroa especially enjoyed playing in the Interlochen Philharmonic. “When I first came to Interlochen, I was so thankful for the opportunity that MMP had given me, and I was excited to learn new things and to play with amazing conductors and musicians,” he said. “Being at Interlochen changed my life. I practiced more, and I improved as a musician.”

During that summer at Camp, Vivoni Figueroa learned about the Arts Academy through Eric Stomberg, instructor of bassoon and director of music at Interlochen Arts Camp and president of the Double Reed Society.“ Meeting Mr. Stomberg was an amazing opportunity,” Vivoni Figueroa said. “Through him, I learned about the Arts Academy, and he suggested that I audition to study with him there. I am so thankful for that opportunity.”

“Helping Edric develop as a musician and watching his personal growth as a human being from his days at the Arts Camp to his graduation from the Arts Academy was a tremendous honor for me,” Stomberg said. “The musical and artistic transformation during his time at Interlochen allowed him to take on more leadership roles, including a significant role in the Arts Academy Orchestra performance in Miami at New World Center.”

In March 2020, 118 Interlochen Arts Academy musicians, dancers, creative writers, filmmakers, actors, and visual artists traveled to Miami to immerse themselves in the city’s cutting-edge arts ecosystem. Working with various Miami-based art partners, Interlochen students collaborated and performed for area schools and programs like MMP, Young Musicians Unite, Guitars Over Guns, the Frost School of Music, and more. This dynamic week culminated in a vibrant multidisciplinary performance called “One” at the New World Center.

There, Vivoni Figueroa got to share the stage with both MMP and Arts Academy peers. “That experience was the best thing that could have happened my senior year. I went from this amazing community in Miami to another at Interlochen. Having those two communities end up connecting and collaborating with one another—I am super blessed to be a part of it.”