Hosted in the new, state-of-the-art Music Center, the major will be led by Marc Lacuesta. 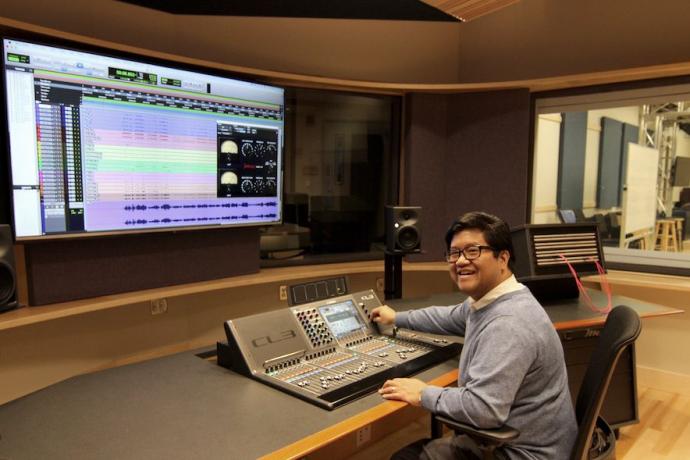 Beginning in the fall of 2020, Interlochen Arts Academy students will be able to major in Music Production and Engineering. Independent engineer, producer, arranger and vocalist Marc Lacuesta will lead the new program.

The Music Production and Engineering major is designed to introduce students to the artistic and technical aspects of working in a music studio. Using state-of-the-art recording facilities in the institution’s new Music Center building, students will learn the nuances of audio production and create professional-quality recordings.

“Recording is universal for a musician, as is technology,” said Interlochen Center for the Arts Provost Camille Colatosti. “Whether you're an instrumentalist recording an audition tape, a band member making a demo reel, or a performer producing an album, all musicians will find themselves in a recording studio. With the advent of digital technology, learning how to leverage that technology in music-making is essential. We have created this program to prepare all of our students for the world in which we live today.”

Newly appointed Director of Music Production and Engineering Marc Lacuesta joined the Interlochen Arts Academy faculty in August. While the major will not formally be offered until 2020, Lacuesta began teaching production curriculum to students enrolled in other majors in the fall of 2019.

“Marc Lacuesta is the perfect leader for this new program,” Colatosti said. “In addition to his engineering and producing skills, Marc is a born educator with the patience and dedication to help young people learn and succeed. His genuine love of learning and helping others is clear in all he does. We are excited to have Marc join Interlochen and lead this important new program.”

Lacuesta began his career with Nashville’s legendary Quad Studios, where he worked with artists such as Kenny Rogers, Brad Paisley, and Keith Urban. Since 2003, Lacuesta has been an independent engineer, producer, arranger, and vocalist. Lacuesta’s independent clients include Neil Young, Big and Rich, and Mavis Staples. In addition to his engineering career, Lacuesta is a well-known vocal producer and has worked on the vocals for ABC’s Nashville and OWN’s Greenleaf. His compositions, arrangements, and recordings have appeared on video games including Bioshock Infinite, Mafia III, and 50 Cent’s Bulletproof.

“I look forward to working side by side with the amazing faculty and staff at Interlochen, and sharing my knowledge and experience with a highly talented and hard-working student body,” Lacuesta said. “Interlochen Arts Academy's commitment to excellence in the arts is legendary, and I'm honored to join in that tradition.”