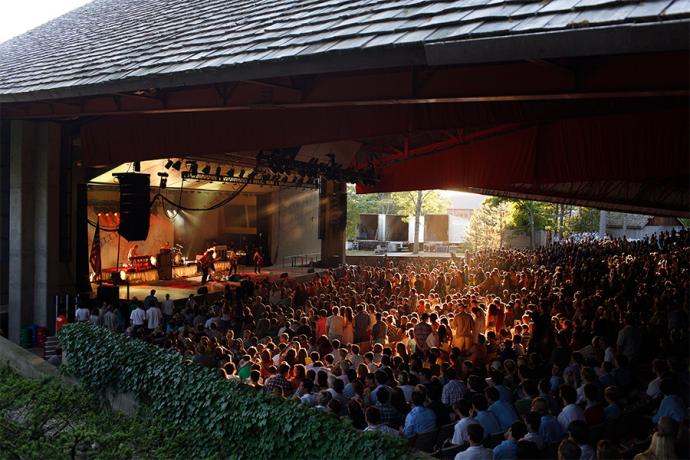 Star entertainers Harry Connick Jr., Chicago, and Jake Owen will headline the return of in-person public performances at Interlochen Center for the Arts as part of a six-concert Interlochen Arts Festival Aug. 3-29. Tickets will go on sale June 22 and can be purchased at tickets.interlochen.org.

“We are thrilled that our friends and neighbors will be able to return to Interlochen for incredible Arts Festival performances,” said Interlochen Center for the Arts President Trey Devey. “There is nothing like experiencing a live concert amidst the beauty and creative energy of the Interlochen campus. We know how much our supporters cherish this series, which is also a vital source of support for student scholarships.”

The 2021 summer Interlochen Arts Festival will follow all state gathering and health guidelines and will kick off on Tuesday, Aug. 3, at 7:30 p.m. with popular music chart-topper Chicago. Next Harry Connick, Jr. and his seven-piece band will celebrate a return to live performances with their “Time To Play!” summer tour on Tuesday, Aug. 10, at 7:30 p.m. The best-selling rock band Foreigner will take the stage on Saturday, Aug. 14, at 7:30 p.m., followed by the award-winning singer-songwriter Jake Owen, who will perform on Thursday, Aug. 26, at 7:30 p.m. Two-time Grammy Award winners Old Crow Medicine Show will bring their signature folk music to Interlochen on Saturday, Aug. 28, at 7:30 p.m. with special guest Molly Tuttle. Finally, blues icons Buddy Guy and Robert Randolph will present an unforgettable evening of American roots music on Sunday, Aug. 29, at 7:30 p.m.

A much-anticipated northern Michigan tradition, the summer Interlochen Arts Festival has brought top-tier performers to Interlochen’s wooded campus since 1964. In recent years, the Arts Festival has attracted audiences of more than 45,000 patrons annually, making it one of the largest arts festivals in northern Michigan. Festival events are primarily hosted at Kresge Auditorium, a 4,000-seat outdoor venue on the shores of scenic Green Lake.

The festival traditionally includes concerts, plays, and musicals by top ensembles of Interlochen Arts Camp, the renowned multidisciplinary summer arts program. Due to the COVID-19 pandemic, the summer 2021 Arts Festival will consist of a limited series of late summer concerts, all but one of which will take place after the conclusion of Interlochen Arts Camp. While Arts Camp 2021 student performances will be closed to the public as part of rigorous health-and-safety protocols, many will be livestreamed at interlochen.org/live. As always, concerts by the World Youth Symphony Orchestra, the Camp’s flagship musical ensemble, will be broadcast live on Interlochen Public Radio. 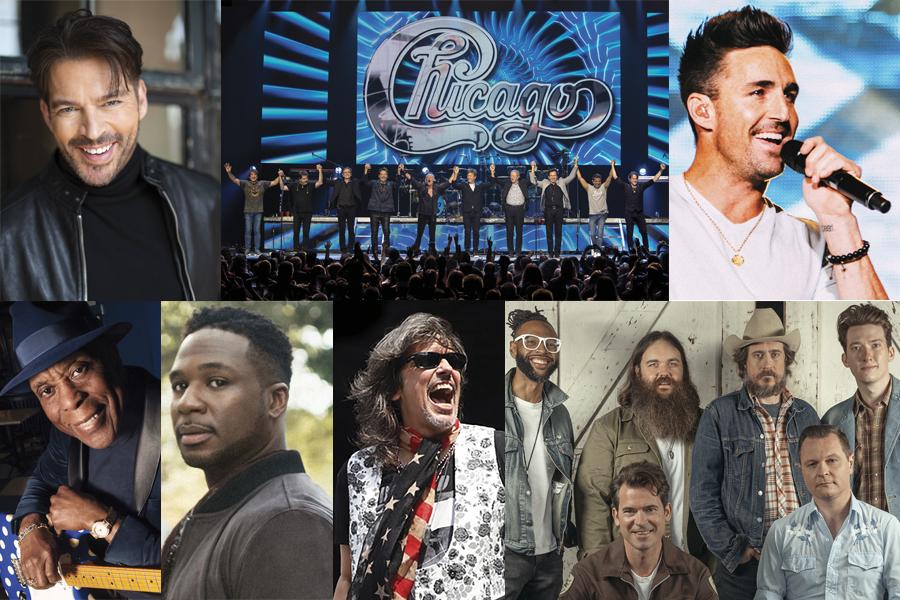 Chicago
Tuesday, Aug. 3, 7:30 p.m. | Tickets starting at $57
One of the most memorable chart-toppers in popular music, Chicago’s instantly recognizable sound—a fusion of pop, rock, and jazz—and trademark horn section have propelled them to 11 number-one singles, two Grammy Awards, two American Music Awards, and a Recording Academy Lifetime Achievement Award. Join the Rock and Roll Hall of Famers for an evening of hits such as “25 or 6 to 4,” “Saturday in the Park,” and “If You Leave Me Now.”

Harry Connick, Jr. and his Band
Time to Play!
Tuesday, Aug. 10, 7:30 p.m. | Tickets starting at $67
Harry Connick, Jr. has exemplified excellence across multiple platforms in the entertainment world—in music, film, television and Broadway—garnering Grammy, Emmy, and Tony awards and nominations. Join Harry and his seven-piece band as they celebrate a return to live performances with their “Time To Play!” summer tour, which will showcase his New Orleans influences and songs from across his remarkable career.

The Greatest Hits of Foreigner
Saturday, Aug. 14, 7:30 p.m. | Tickets starting at $48
More than four decades after its founding, Foreigner continues to garner new fans among audiences young and old. Led by Songwriters Hall of Famer Mick Jones, Foreigner has released 10 multi-platinum albums and penned 16 top-30 hits including “Jukebox Hero,” “Cold as Ice,” and “I Want To Know What Love Is.” Join Foreigner for a night of classics and experience one of the best-selling rock bands of all time live in concert.

Jake Owen
Thursday, Aug. 26, at 7:30 p.m. | Tickets starting at $43
Academy of Country Music Award and American Country Award-winning singer-songwriter Jake Owen has been topping the country charts for more than a decade. His breakout album Barefoot Blue Jean Night garnered four consecutive number-one hits including the title track, “Alone with You,” and “Anywhere with You.” Since then, Owen has added four more number-one songs to his accolades, and his latest single, “Made for You,” is rapidly climbing the country charts. Don’t let this performance be “The One That Got Away”!

Old Crow Medicine Show with special guest Molly Tuttle
Saturday, Aug. 28, at 7:30 p.m. | Tickets starting at $32.50
Best known as the band that brought the world “Wagon Wheel,” Old Crow Medicine Show is no one-trick pony. The two-time Grammy Award winners have sold more than two million singles, produced six albums, and been inducted as members of the Grand Ole Opry. After more than 20 years, Old Crow Medicine Show remains an icon of the folk genre with hits like “Carry Me Back,” “Sweet Amarillo,” and “Tell it to Me.” Americana Music Award-winning guitarist and songwriter Molly Tuttle joins the band for a truly unforgettable evening.

Buddy Guy with Robert Randolph & the Family Band
Sunday, Aug. 29, at 7:30 p.m. | Tickets starting at $36
Witness two blues icons in one incredible performance! With 18 solo albums, eight Grammy Awards, a Recording Academy Lifetime Achievement Award, and a National Medal of Arts to his credit, Buddy Guy has solidified his place as one of the greatest guitarists of all time. Four-time Grammy nominees Robert Randolph and the Family Band join the Rock and Roll Hall of Famer for an unforgettable evening of American blues music.