A lesson on "Postillion's Air and Fugue" from Bach's Capriccio on the Departure of His Beloved Brother, BWV 992

Already dedicated to Bach at an age when most young pianists succumb to the lure of pyrotechnics, Rosalyn Tureck gave her first all-Bach recital at the age of fifteen. After graduating from Juilliard as a scholarship student of Olga Samaroff, she won such important contests as the National Federation of Music Clubs and the Schubert Memorial and received the first Town Hall Endowment Award for her all-Bach series. Scoring a sensational success on her London debut in 1953, she made her home in England for a time but is now back in this country where she is currently touring after an itinerary that took her to Spain, Portugal, and South America last summer.

In addition to recording the Goldberg Variations (Capitol), the Well-Tempered Clavier and a Bach Recital on the piano as well as a Harpsichord Recital (Decca), Miss Tureck has edited a three-volume Introduction to the Performance of Bach (Oxford University Press), to accompany which she has recently recorded an album for Capitol.

I have been invited to set down some ideas with the student in mind, on the last two movements of Bach's Capriccio on the Departure of His Beloved Brother. To this end I would like first to present some general precepts.

The quality of great art is discovered where the abstract and the imaginative meet. This applies to performance as well as to creative art. The abstract, as I mean it in this context, applies to the [unclear] and structure of music, and the implications of its historical and instrumental traditions. The first requirement for a performer in studying any composition is a knowledge of the motives and their style of development within that composition. Failing this would be equivalent to reading a sonnet by Shakespeare for the pleasure of its sonorities and rhythm but without understanding of the words and the sonnet form. Beyond the structure, however, lies nuance of meaning, for music is more than the sum of its parts. In the Aria and the Fugue based on the Postillion's horn-call, the motives are not only lively and bright but also representational, actually symbolizing the title as well as the mood evoked by it. In working out the interpretation, try, therefore, to combine the results of the study of the structure with the charm and joy of Bach's motives and style, which unmistakably represent his own imaginative titles.

Aria of the Postillion

Phrasing. Before deciding on phrasing, one must know clearly what the motives are. This holds good for all styles of music. Here, the two main motives are:

Usually, there is more than one possibility for the phrasing of a motive. If the phrasing is based on the real structure of the motive and its development within the movement, the choices which arise will each be good, and one may choose according to his taste and, in the case of the student, on his technical ability to carry it out. I present two:

The phrasing selected must be retained throughout the movement whenever the motives appear.

Tempo. Be sensible. Give the Postillion time to blow his horn properly. And give yourself time to play the repeated notes of this motive with clarity and good rhythmic values, so that the two sixteenths in this figure are equal in duration, and the arrival on the quarter note is not smashed or rushed, but strong and sure.

Fugue in Imitation of the Postillion's Horn

Form. Bach developed this fugue mainly in three voices, but in the opening he presented his material in four voices. I have indicated by-capital letters the voice in which the fugue's subject appears as A-alto, T-tenor, B-bass, S-soprano. CS indicates the counter-subject. Note the postillion's horn motive in the counter-subject.

Phrasing. Choices of phrasing apply here also, but due to limited space it is impossible to present them all. However, I include a choice of treatment for the horn motive in the fugue. Thus, if the legato treatment is chosen for the Aria, retain it for the Fugue—equally so, if the staccato treatment is the choice. For, since Bach employs this motive in both movements, unity of performance is required, and this is achieved by phrasing this motive in the same way, both in the Aria and in the

Fugue. I give, as well, a choice of treatment for the ending phrase of the counter-subject, in which the horn motive appears.

Tempo. Lively, but do not play faster than your fingers and your mind can carry you. If you do, Bach's motives will be blurred and lost. Not only will the sense of the Fugue be destroyed, but also its charm and pictorial quality, which depend on the clarity of the motives.

Beginning of Fugue with Articulations and Fingerings 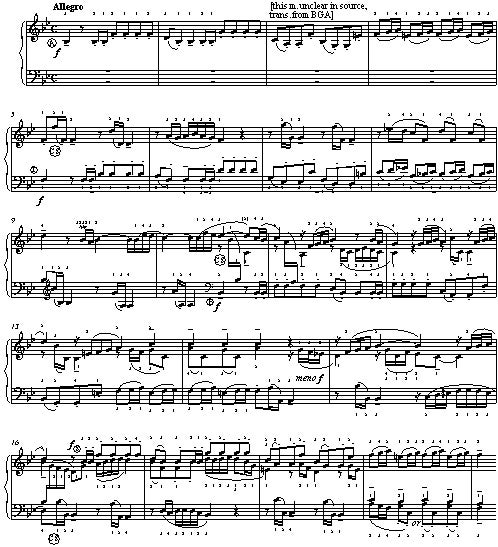 In many places in the score, Dr. Tureck indicated two possible articulation options. Typically, this is either a choice between slurring two notes, or playing them staccato, as demonstrated in the third musical example above. In this transcription, the options have been left out to reduce clutter, the slurred version being left in rather that the staccato version. It is left as an exercise to the reader to choose their own version and substitute it in.