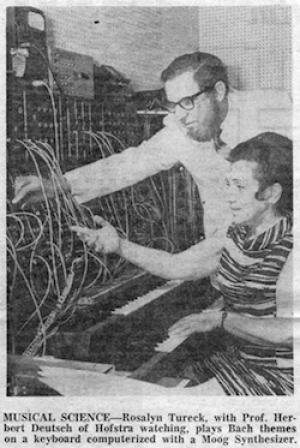 NEW YORK — No getting away from the fact it's a Moog season.

Last Thursday Rosalyn Tureck, looking fresh as a daisy after 16 years in London, played the third voice in a Bach piece at a session of the International Bach Society's Third Annual Congress.

The other two voices were programmed in a Moog (pronounced like vogue) synthesizer.

On August 28 the inventory himself, Robert Moog, 34, goes to the Museum of Modern Art to play one of his instruments in the museum garden.

At the same time Columbia Records joyfully reports that “Switched-On Bach,” the record that has created a sensation in the music world, continues to lead classical records in popularity and is making a brave fight for position in the popular record class.

And up in Trumansburg, N.Y., in a converted furniture store, Moog is turning out three-and-a-half synthesizers a week in an effort to meet the huge demand for his instrument. Already there are over 125 of them in colleges around the country.

Madame Tureck approached the instrument with deference Thursday night. The other two voices had already been computerized under the direction of Herbert Deutsch, assistant professor of music at Hofstra University, and co-inventory of the instrument.

For Miss Tureck, who is a founder-director of the society, playing Bach with a tangle of wires that looked like an upended plate of spaghetti, was quite an experience.

The story of Moog is now familiar to all music lover. Born to a mother who felt he would be a concert pianist or nothing, he escaped into science at Bronx High School for Science, but found that he could not leave music completely.

Moog worked out details of an instrument that plays music and creates new tones. A physicist, Walter Carlos, is responsible for “Switched-On Bach.” Having a scientific turn is not essential for playing the synthesizer—but its advocates say that it helps.

The synthesizer depends upon sophisticated recording equipment for its best effect. Minute voltage changes in the oscillator controls are responsible for the wide ranges of which the instrument is capable.

While keyboards are used as the control agent in the synthesizer there is no reason why it cannot be operated without a keyboard.

The Moog performance was one of the highlights of the Congress. However, beginning tomorrow, Monday there will be four more sessions of the congress, all at the Library for the Performing Arts in Lincoln Center and all from 6 p.m. to 8 p.m. While the sessions are primarily for members of the society others may be seated for a contribution of $2.50.