The Green Lake Township Board of Trustees voted to name the 2.5-mile stretch of M-137 that borders the Interlochen campus in honor of pioneering arts educator Joseph E. Maddy, who founded Interlochen Arts Camp in 1928. 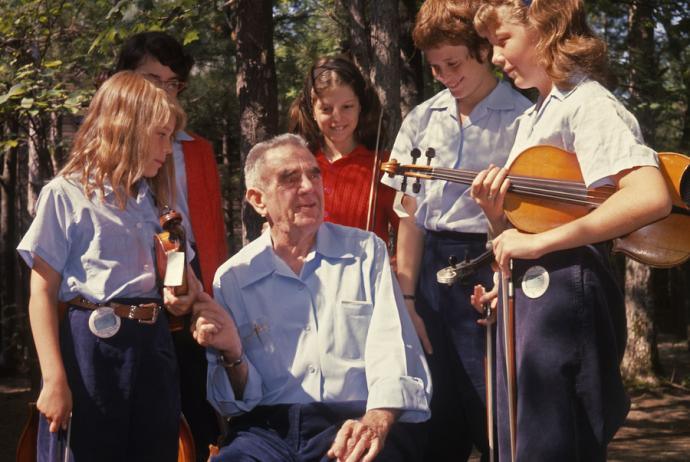 Earlier this year, the Green Lake Township Board of Trustees voted to name the township’s 2.5-mile stretch of M-137 J. Maddy Parkway in honor of the pioneering music educator Joseph E. Maddy, who founded Interlochen Arts Camp in 1928.

Under the leadership of the pioneering arts leader Joseph E. Maddy, the National Music Camp (the precursor to Interlochen Arts Camp) grew from welcoming 115 students from across the country in 1928 to more than 1,000 young artists from around the world in 1966, with its flagship orchestra performing at such venues as the White House and Carnegie Hall. Among his many accomplishments, Maddy began broadcasting Interlochen concerts on national radio networks in the 1930s and opened Interlochen Arts Academy in 1962. He is widely credited with making music a regular part of the American school curriculum and fostering the growth of school orchestras.

Green Lake Township, which was organized in 1883, is located in the western part of Grand Traverse County and is bounded by Long Lake Township to the north, Blair Township to the east, Grant Township to the south, and Inland Township (in Benzie County) to the west. Its commercial and population center is the Village of Interlochen, located along M-137 just south of U.S. 31.

The dedication ceremony will take place at noon on Friday, September 24, in the field adjacent to the iconic J. Maddy Parkway Crosswalk on the Interlochen campus. (Guests can park in the lot near Interlochen Public Radio.)