Founded in 1928, Interlochen Center for the Arts is one of the nation's first and foremost institutions dedicated to the development of young artists. We invite you to explore our rich history. 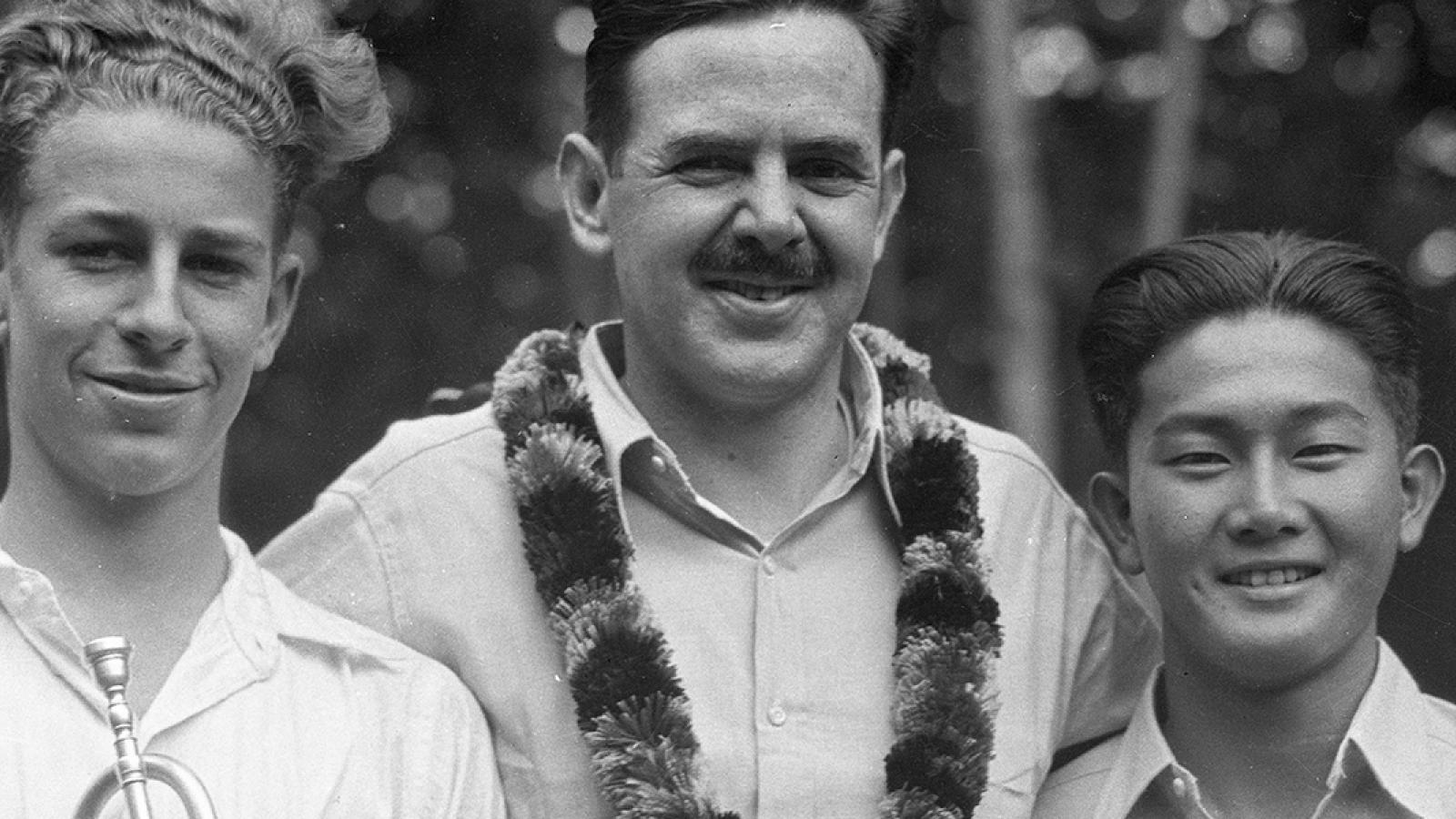 Interlochen Center for the Arts founder Joseph Maddy (center) with two students in 1930.

In 1926, Maddy led an ensemble of more than 200 student musicians in a performance at the Music Supervisors National Conference in Detroit, Michigan. The performance was well received, and Maddy was asked to reconvene the National High School Orchestra during the 1927 and 1928 conferences.

Inspired by the success of the National High School Orchestra, Maddy and fellow music educator Thaddeus P. Giddings became determined to create more opportunities for talented musicians to rehearse and perform together. Maddy and Giddings, reflecting on their own experiences at choral conducting retreats in upstate New York, conceived the idea of a secluded summer camp for young musicians. On July 6, 1927, Maddy and Giddings incorporated the National High School Orchestra Camp.

Maddy began a nationwide search for a site for the program and quickly identified Maine and Michigan as preferred locations. Businessman Willis Pennington heard about Maddy's mission and invited him to tour his property, a narrow strip of land between two lakes in northern Michigan. Maddy was entranced with the area and purchased a portion of Pennington's property for the National High School Orchestra Camp.

On June 24, 1928, 115 students from across the United States arrived in Interlochen, Michigan for the inaugural season of the National High School Orchestra Camp. Over the course of eight weeks, the students studied and rehearsed under the guidance of 24 faculty. Thousands of area residents packed the newly constructed Interlochen Bowl to witness a phenomenon that was entirely new to them: high school students who performed like professionals.

Despite rapid growth in its early years, the Camp struggled financially. Large debts and the early years of the Great Depression nearly caused the Camp to fail, but enthusiastic support from musicians, private donors, instrument-makers, and music publishers helped the young organization survive.

Through the 1930s, the Camp raised its national profile through performances and broadcasts. Starting in 1930, the Sunday evening orchestra concerts were broadcast nationwide over the CBS and NBC radio networks. In 1939, the National High School Band and Orchestra performed at the New York World’s Fair. By the end of the decade, the Camp had established itself as the national leader in music education and had changed its name to the National Music Camp. As the Camp continued to flourish, new arts disciplines were incorporated. Theatre, visual arts, and dance were added to the curriculum by 1940; creative writing arrived in 1976, and filmmaking was inaugurated in 2005. In 1991, the National Music Camp changed its name to Interlochen Arts Camp to reflect the full diversity of its artistic offerings.

In 1962, Interlochen Arts Academy opened its doors as the nation’s first independent boarding school for the arts. In its first year, the school had 135 students and a staff of 34. It combined rich experiences in the arts with challenging and comprehensive college-preparatory academics. Over the years, the school and its students have compiled a record of success in arts and academics, with more Presidential Scholars than any other school in the nation, public or private. Academy alumni can be found in leadership positions in the arts and other professional fields.

In 1961, internationally acclaimed pianist Van Cliburn came to the National Music Camp to perform a benefit concert. Inspired by the success of Cliburn's performance, the Camp arranged for future performances by Cliburn and other high-profile artists. In 1964, a visit from the Philadelphia Orchestra inaugurated the Interlochen Arts Festival, a summer-long series of performances by acclaimed artists in both classical and contemporary genres. Today, the Interlochen Arts Festival is a highly anticipated event that attracts visitors from across the state of Michigan and generates thousands of dollars of scholarship funds. Past guests have included Joshua Bell, Yo-Yo Ma, Itzhak Perlman, Stan Kenton, Diana Ross, Reba McEntire, the Chicago Symphony Orchestra, Bob Hope, Martha Graham Dance Company, and countless others.

In 2004, the Interlochen College of Creative Arts was founded to provide arts education opportunities for adult learners. Today, the College of Creative Arts offers dozen of programs in all arts areas, including music, theatre, fiber arts, visual arts, media, and more. It is a licensed provider of State of Michigan Continuing Education Clock Hours for K-12 educators.