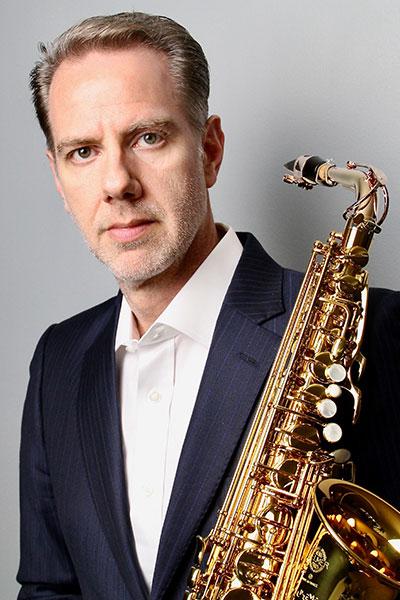 Professor of Saxophone
University of Michigan

Saxophonist Timothy McAllister has been hailed as an “exemplary soloist” (Gramophone Magazine), “a virtuoso, one of the foremost saxophonists of his generation” (The New York Times) and “a titan of contemporary music and the instrument, in general” (The Cleveland Plain Dealer). He is one of today’s premier wind soloists, a member of the 2018 GRAMMY® Award-winning PRISM Quartet, and a champion of contemporary music credited with over 40 recordings and 200 premieres of new compositions by eminent and emerging composers worldwide.

As part of the 70th Birthday celebrations worldwide honoring Adams in 2017, he performed the Saxophone Concerto with the Houston Symphony Orchestra, Netherlands Radio Philharmonic Orchestra at the Concertgebouw, Orchestre National de Lyon, Indianapolis Symphony, along with other performances and recordings of Adams’s music, including City Noir, with the Los Angeles Philharmonic, San Diego Symphony, and the Berlin Philharmonic.

To date he has appeared with over forty of the world's top orchestras and ensembles in twenty countries, and he has the distinction of being only the second saxophonist to appear as soloist in the 120-year history of the BBC Proms concerts. He has recorded for the Nonesuch, ECM, Deutsche Grammophon, Stradivarius, Soundset, Berlin Philharmonic Recordings, Centaur, Albany, Naxos, Equilibrium, New Focus, AUR, Summit, New Dynamic, Parma, XAS/Naxos, and Innova labels. McAllister won a 2015 GRAMMY® Award with the St. Louis Symphony Orchestra and David Robertson as soloist on the album "John Adams: City Noir" featuring the Saxophone Concerto. His recording of Kenneth Fuchs’s Saxophone Concerto, RUSH, with JoAnn Falletta and the London Symphony Orchestra was released on NAXOS in August 2018.

A revered teacher of his instrument, he is regularly invited to appear at the world's leading conservatories, music festivals, and summer academies. Previously on the faculty of Northwestern University, he was appointed Professor of Saxophone at the University of Michigan School of Music, Theatre and Dance in September 2014, succeeding his legendary mentor, the American classical saxophonist Donald Sinta.

In my teaching, I champion the uniqueness of individual students by recognizing that each student demands his or her own musical and pedagogical “blueprint.” My responsibility as a teacher is to embrace all possible strategies and pathways for success. My diverse background, which includes professional training in music education, performance, and conducting, is a source of strength in my teaching which I regularly draw upon to demonstrate multiple perspectives on a given topic or concept.