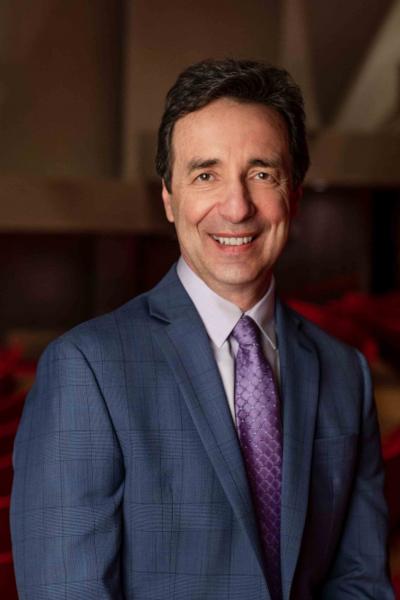 After joining Interlochen Center for the Arts in 1992 as controller, Patrick M. Kessel was promoted in 2004 to vice president of finance and operations. In three decades of service to the institution, he has worked with five presidents. In 2013, he received the President's Distinguished Service Award, recognizing his additional work during a three-year tenure as interim vice president of advancement. During that time, he oversaw implementation of Salesforce for donor tracking, enhanced research and stewardship, and completed the initial feasibility study for the successful $135 million CREATE AMAZING campaign.

In 2020, Kessel was nominated by President Devey and received the Unsung Hero Award from the National Business Officers Association. The award recognized the significant and ongoing impact Kessel has made at Interlochen Center for the Arts.

Kessel’s leadership established Interlochen Center for the Arts as a financially solid organization. By implementing a strategic financial plan, Interlochen Center for the Arts has become the rare non-profit to balance or experience budget surplus every year since 2004. During the same time period, the organization’s budget doubled from $24 million to $48 million. With Kessel’s guidance, Interlochen’s net assets increased from $47 million to $222 million. He also established reserve funds for the institution, currently totaling $57 million.

In addition to his financial leadership, Kessel navigated Interlochen’s campus into the future, overseeing a comprehensive campus master plan with over $90 million in capital improvements. Completed in 2021, the plan established campus-wide upgrades and new facilities for all Interlochen Center for the Arts disciplines, including Creative Writing, Dance, Film & New Media, Interdisciplinary Arts, Music, Theatre, and Visual Arts.

Kessel also spearheaded the establishment of Interlochen's sustainability initiative, which is currently assessing the steps toward carbon neutrality. These efforts were recognized in 2019 when the institution was nationally recognized as a Green Ribbon School by the U.S. Department of Education.

“The switch from the for-profit world to Interlochen not only changed my career path, but my life. I feel fortunate to be a part of Interlochen Center for the Arts’ mission. The arts are a crucial aspect of society. Now, more than ever, we need the arts as a catalyst to bring together people from diverse backgrounds and perspectives.”

Prior to Interlochen, Kessel worked in the for-profit sector, holding positions in audit/accounting and information technology at Archer Daniels Midland and Sara Lee Corporation. He holds a B.S. in accounting from Illinois State University. Kessel is an active volunteer, serving as treasurer of the Traverse Symphony Orchestra from 2009 to 2019, and as past president and treasurer of Traverse City’s Central Neighborhood Association. His mission and service work includes Habitat for Humanity and projects in Appalachia, Chicago, and the Bahamas.

Kessel's family has multiple ties to Interlochen, where he met his wife Barb as a fellow staff member. Their daughter Jody attended Camp, graduating from the Academy in 2008 as a theatre major. She returned to campus for nine summers, teaching in Intermediate Musical Theatre and performing in the Interlochen Shakespeare Festival. Daughter Allie also attended Camp and was an inaugural member of the Academy’s Singer-Songwriter program, graduating in 2015. Allie also returned to teach in the Camp’s Singer-Songwriter program.