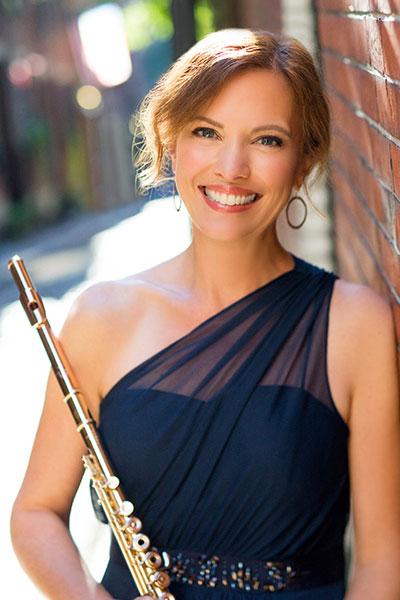 Praised for her "brilliance and beauty of tone," by the Baltimore Sun, Powell Artist Nancy Stagnitta is a leading crossover artist as both classical flutist and jazz artist. Her passion, versatility, and elegant artistry have led to concert engagements in Africa, Europe, Asia, and across the U.S. She recently performed with Grammy Award-winning pianist and composer Billy Childs and the Ying Quartet, and served on the jury for the 2022 Fischoff National Chamber Music Competition. Summer engagements included appearances as guest artist at Sir James Galway’s International Festival, the Clazz International Music Festival in Italy, and the Chicago Flute Symposium.

In 2018, she gave the Asian premier of David Amram's "Giants of the Night" Flute Concerto with the China National Symphony in Beijing. Her album with Grammy Award-winning jazz pianist and composer Bob James, In the Chapel in the Moonlight, has garnered acclaim across musical genres and was described in JAZZIZ magazine as "captivating, brilliant, striking.” Stagnitta has also recorded contemporary American classical repertoire for Capstone Records, and was featured on American Public Media's Performance Today and Classical KING FM in Seattle.

Appointed as U.S.I.A. Artistic Ambassador to Africa, she presented concerts and masterclasses in Angola, Botswana, Madagascar, Mauritius, Mozambique and Namibia. She has performed at the Shanghai Conservatory and on the Voice of America Broadcast Network. A two-time recipient of the Maryland State Arts Council Solo Artist Award, she is the former piccoloist with the Baltimore and Sarasota Opera Orchestras and attended the Spoleto and Sarasota Music Festivals. She has performed, taught, and adjudicated at the National Flute Convention on multiple occasions, including a jazz gala performance in 2014.

A passionate educator, she presents masterclasses and workshops at festivals and universities throughout the U.S. and abroad, including at the Detroit Women in Jazz Festival and the Mannes School of Music in New York, as well as in Germany, France, Italy, and China. Her students at Interlochen have earned spots in the top conservatory programs, as well as in major orchestras throughout the country.

Stagnitta currently serves as Instructor of Flute and Chamber Music at Interlochen Arts Academy and principal flutist with the Traverse Symphony and Great Lakes Chamber Orchestras. She earned her degrees from the Peabody Institute, where she received the Ashworth Prize. Her teachers include Robert Willoughby and Tim Day.