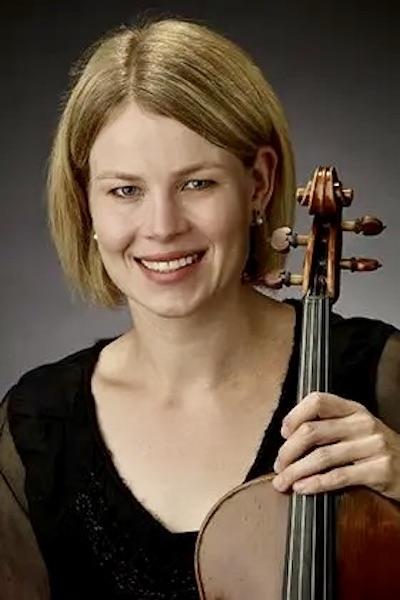 Lembi Veskimets joined the viola section of the Cleveland Orchestra in 1997, having previously held the positions of principal viola of the Ohio Chamber Orchestra and of the National Repertory Orchestra. An enthusiastic chamber musician, she has participated in such festivals and events as the Aspen Center for Advanced Quartet Studies; the Taos School of Music; the Juilliard String Quartet Seminar; the Sarasota Music Festival; the EXPO in Osaka, Japan; Chamber Music Encounters in Paris, France; and the Isaac Stern Chamber Music Workshop at Carnegie Hall. Born in Toronto, Canada of Estonian parentage, she has been featured at the gala concerts of several international Estonian festivals. She has appeared in recital at the International Viola Congress and across the U.S. in cities from Boston to Oklahoma to Los Angeles. Veskimets is a founding board member and past president of the Ohio Viola Society and has served as a board member of the American Viola Society and a contributor to its journal.

Committed to the development of young talent, Veskimets is also a faculty member in the Cleveland Institute of Music's Preparatory Department as well as its Young Artist Program, at the Cleveland Music School Settlement and in the Cleveland Orchestra Youth Orchestra's Advanced Performance Seminar. In the summer she has taught and performed at the CIM-affiliated Encore School for Strings and the Green Mountain Chamber Music Festival. She also performs in the public schools as an artist-teacher in the Cleveland Orchestra's Learning Through Music Program. In the greater Cleveland community, she has performed chamber music on many local series as well as at the 17 Instrumental Evening for the Earth benefit concerts among many others. She received both a Bachelor of Music and a Master of Music from the Cleveland Institute of Music, where she was a student of Robert Vernon.