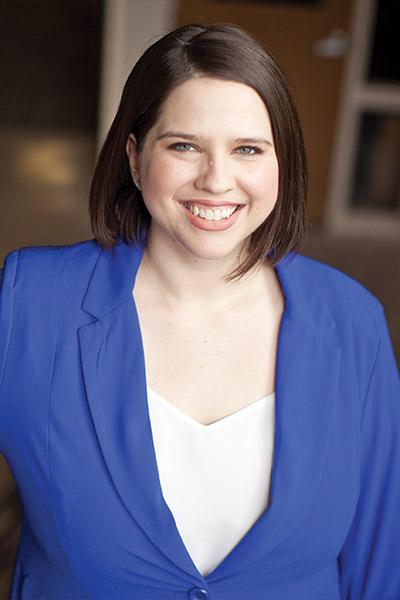 College-Conservatory of Music at University of Cincinnati

Dr. Laura Osgood Brown is an educator, director, and performer, teaching voice and opera at the Interlochen Arts Academy and Camp, and was recently appointed as coordinator of the brand-new Classical Voice Intensive.

She has directed numerous programs of opera scenes as well as full productions. Her students have been recognized in national competitions such as Classical Singer, YoungArts, Schmidt, and NATS, and have been accepted to the top classical voice collegiate programs in the U.S. and abroad.

As a performer, Brown has been the soloist in works such as Handel’s Messiah, Vivaldi’s Gloria, Mozart’s Requiem, Mendelssohn's Elijah, Tatiana’s Letter Scene from Eugene Onegin, Britten’s War Requiem, and Villa-Lobos's Bachianas Brasileiras No. 5. Past operatic roles include Mimì, Micaëla, and the Female Chorus from The Rape of Lucretia.

As a doctoral student at Eastman, she won the concerto competition singing Britten’s Les Illuminations, second place in the Jesse Kneisel Lieder Competition judged by Dawn Upshaw, and was also a finalist in the Friends of Eastman Opera Competition. Additionally, she premiered the role of Nora in Paul Siskind's The Sailor-Boy and the Falcon with Metropolitan Opera mezzo-soprano Stephanie Blythe.

Teachers include Carol Webber, Dr. Barbara Clark, and Dr. Jill Pearon. She has previously taught on the faculty at the Crane School of Music, Ithaca College, and the University of Rochester.

I help students find healthy, efficient, and sustainable ways of singing through the study of diverse and varied repertoire. I seek to instill in each student an understanding of their own instrument and their own learning needs, so that they are empowered to develop effective learning and practice habits. I help students explore the intentions and motivations of each character and text, practicing empathy and understanding, and finding ways to deepen the connections between performer, collaborator, audience, and creator.

B.M., Music Education and Performance in Harp and Voice - Crane School of Music at State University of New York at Potsdam

M.M., Voice Performance - College-Conservatory of Music at University of Cincinnati

D.M.A., Voice Performance and Literature - Eastman School of Music at University of Rochester