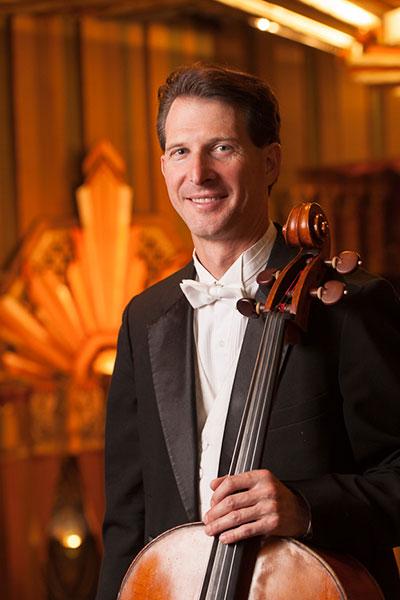 John Marshall is the Director of Orchestra/Professor of Cello at Eastern Washington University (EWU) and Principal Cellist with the Spokane Symphony Orchestra (SSO). He is also a conductor for the Spokane Youth Symphony. With the SSO, Marshall has appeared as a soloist over 20 times. As part of a pandemic project, Marshall video recorded Vivaldi’s The Four Seasons with prominent soloist colleagues and the EWU Orchestra.

Marshall has recorded and produced three compact discs albums of music for cello and bassoon with his wife and musical partner, Lynne Feller-Marshall. The Paradox duo has also filmed two unique music videos featuring their own arrangements of music by Jimi Hendrix and Paul Desmond. Paradox has also been featured on public television, and recently recorded a session of Paradox & Son with James Marshall on viola.

An advocate of cello ensemble, Marshall created the annual CELLObration Spokane festival, which brings together over 60 student and professional cellists for a day of learning and performing music for cello ensemble. Video of CELLObration and cello ensemble at Interlochen is available on YouTube.

Marshall is a graduate of Interlochen Arts Academy, and received degrees from Indiana, Yale, and Northwestern Universities, studying with Janos Starker, Aldo Parisot, and Hans Jensen. His doctoral dissertation focuses on music for two cellos and orchestra. He has been a prizewinner in numerous competitions, including those sponsored by WAMSO(Minnesota Orchestra), the Union League Civic and Arts Foundation, and the Chicago Cello Society. Marshall was selected twice to participate in the prestigious Piatigorsky Cello Seminar.

Marshall is in the final stages of completing a cello transcription of Mozart’s Concerto for Bassoon, as well as a method book focusing on coordination exercises for string players.

My teaching focuses on improving the coordination between the opposing motions of the two hands. My goal is to make cello playing easier and more physically natural, so the student is able to express themselves and sing through the instrument.

Three albums of music for cello and bassoon