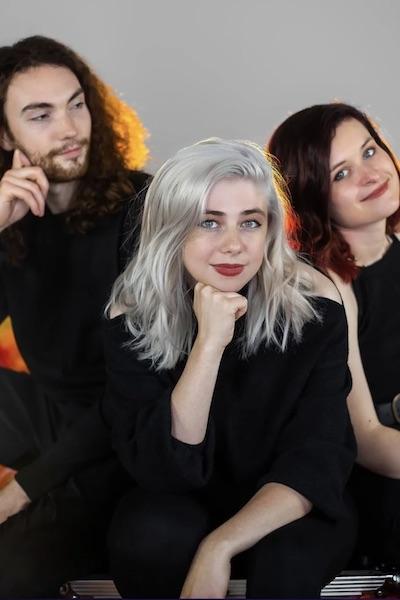 Long before glowing acclaim from ​NPR ​and ​Billboard​, packed shows, unforgettable festival appearances, millions of streams, and collaborations with everyone from BTS to Kaboom Collective, the journey of The Accidentals commenced in a public high school classroom in Traverse City, MI. As the story goes, concertmaster​ ​violinist Savannah Buist and cellist Katie Larson raised their hands at the request for volunteers to play a music boosters concert and wound up being musical soulmates.

Sav and Katie transferred to Interlochen Arts Academy for the remainder of high school and completed a successful crowdfunding campaign to release ​Bittersweet​ only a year later. Shortly after, they met Michael Dause at Blissfest and welcomed him behind the kit as their full-time percussionist, cementing the lineup.

The Accidentals now host and lead workshops across the country, hoping to inspire other young musicians. They opened a nonprofit in 2020 called Play It Forward, Again and Again, to help provide access to instruments, lessons, and mentors for all aspiring musician

The band wrote “Marrow” for the award-winning movie, ​Almost Home​. “Michigan and Again” showed up on an episode of ​The Boys​ on Amazon Prime Video.

They have collaborated with the likes of Tom Paxton, Kim Richey, Dar Williams, Maia Sharp, Mary Gauthier, and Jaimee Harris. ​In 2018, The Accidentals began work on their fourth full-length album, Vessel.