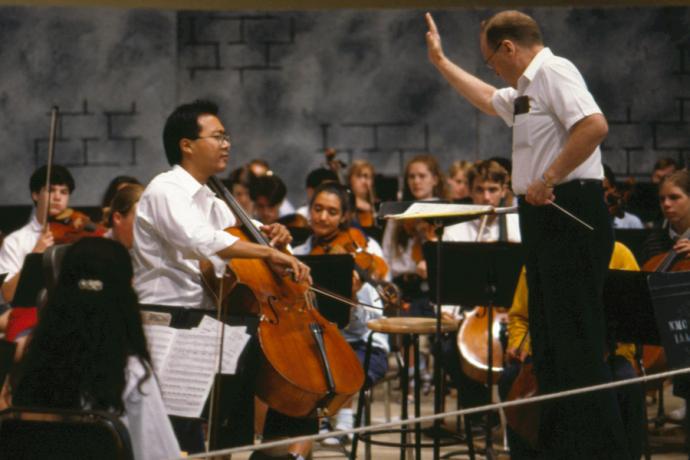 The Interlochen community mourns the loss of one of its most influential musical mentors. Grammy Award-winning brass player, conductor, educator, and Interlochen treasure Henry Charles Smith passed away Sept. 8 at age 90.

As principal trombonist with the Philadelphia Orchestra, Smith played over 2,000 concerts with Eugene Ormandy and many other of the 20th century’s greatest conductors. As a trombone and euphonium soloist, a chamber musician, and as a writer and editor, his recordings and editions are internationally known.

Smith’s musical journey began in the second grade when he took up the violin, migrating to baritone horn in sixth grade and adding the trombone in junior high. He first came to Interlochen in 1948 as a High School Boy to study trombone at National Music Camp. He returned in 1950 and 1951 as a member of Camp staff, and then in 1960, he began his tenure of more than 20 summers as an Interlochen Arts Camp faculty member and conductor, including leading the renowned World Youth Symphony Orchestra as music director from 1981-1996. Smith returned a final time to teach and guest conduct at Interlochen Arts Camp in 2001.

Smith dedicated much of his career to nurturing young artists, teaching as professor of music at Indiana University and The University of Texas at Austin, and conducting the Youth Arts Orchestra at Boston Tanglewood Music Center before coming to Interlochen. He was also a professor emeritus of music at Arizona State University. Colleagues, friends, and students remember his gentle and respectful nature, as well as his memorable sayings such as "Tu-tu-ka-tut."

His conducting resume expanded far beyond Interlochen. He spent 17 seasons on the podium with the Minnesota Orchestra, serving as associate and resident conductor from 1971-1988 and conducting over 1,000 concerts. In 1989, Henry joined the South Dakota Symphony as their musical director and stayed 12 years. Known for his relentless energy and passion for precision, he brought the orchestra to new artistic heights and into a new home, Washington Pavillion’s Great Hall, built with solid community support after the collapse of the Sioux Falls Coliseum in 1994. From 1995-2008 he served on the faculty of the American Conductors Workshop in Iowa City, Iowa. His guest conducting includes engagements with the Detroit, Dallas, Kansas City, and National Symphony Orchestras, the St. Paul Chamber Orchestra, the Indianapolis, San Antonio, Delaware, Oregon, North Carolina, and Phoenix Symphonies. He has conducted the Calgary Philharmonic and Edmonton Symphony in Canada.

Smith graduated with a bachelor of arts from the University of Pennsylvania in 1952 and went on to earn his Artist's Diploma in Music Performance from Curtis Institute of Music.  In 2007, he was awarded an honorary Doctor of Music from Augustana College in Sioux Falls, South Dakota.

He is survived by three children, eight grandchildren, and seven great-grandchildren. His son, Henry Charles Smith IV, and daughter-in-law, Elizabeth Campeau, both of Colorado Springs, Colorado; and granddaughters Linh Marie Smith and Minh Anne Smith are all alumni of his beloved Interlochen.

A memorial service is scheduled for Monday, Nov. 22 at 3 p.m. EST at Colonial Church in Edina, Minnesota. Interested parties may attend the memorial via livestream on the church's YouTube channel.