A legacy of lives, lessons, and land 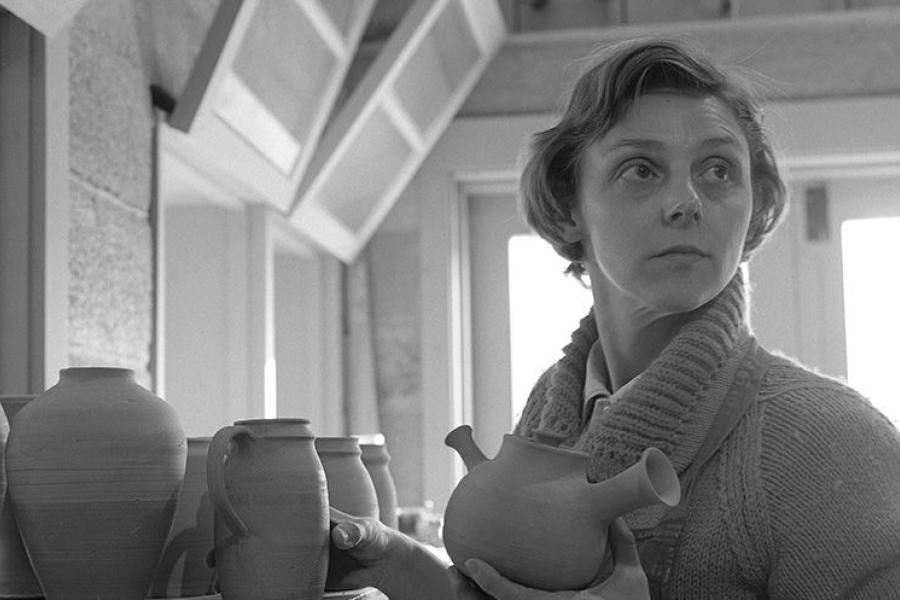 Jean Parsons works in her studio. 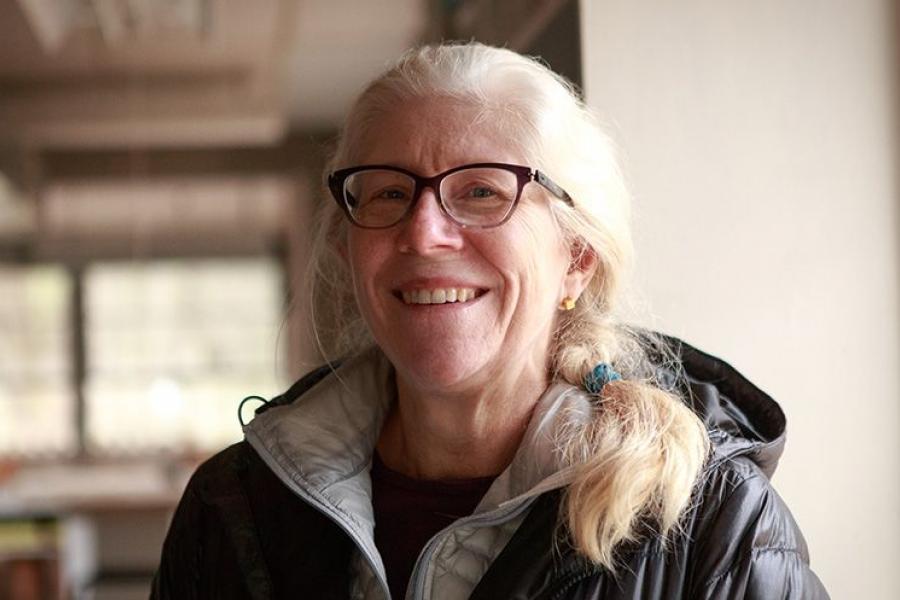 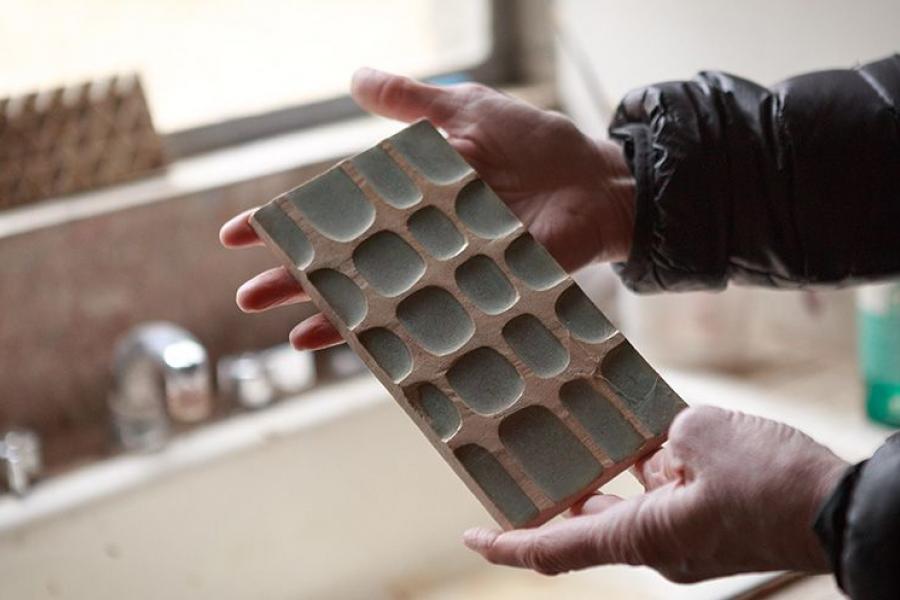 Robin Crocker shows off one of Parsons' clay tiles. 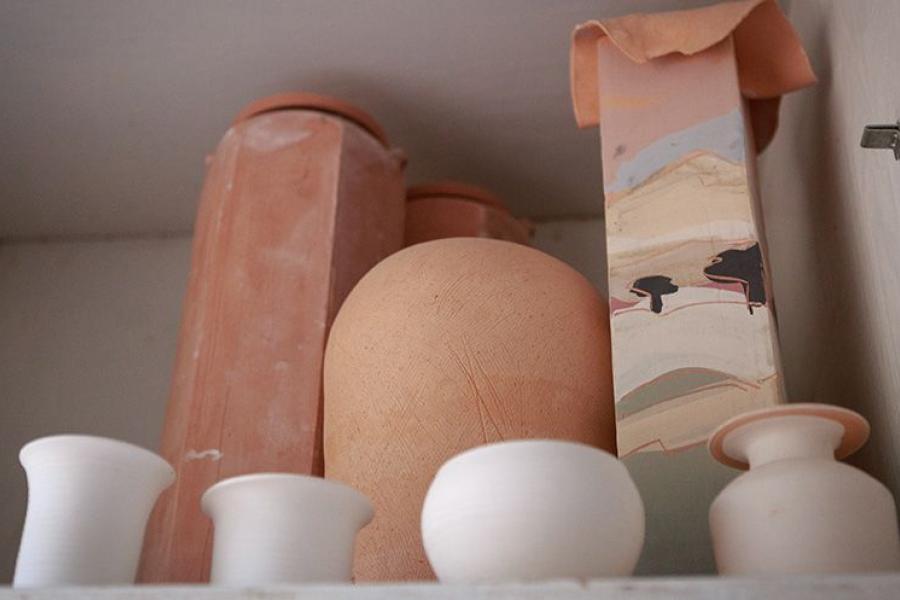 Several of the unglazed pieces in Parsons' studio. 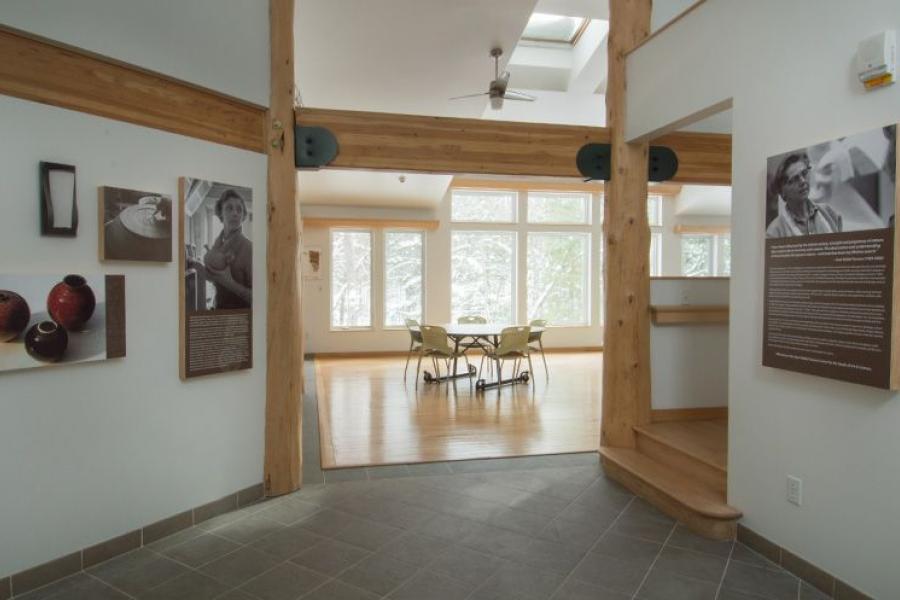 The interior of an Eastern Michigan University building at the Parsons site, complete with Robin Crocker's installations. 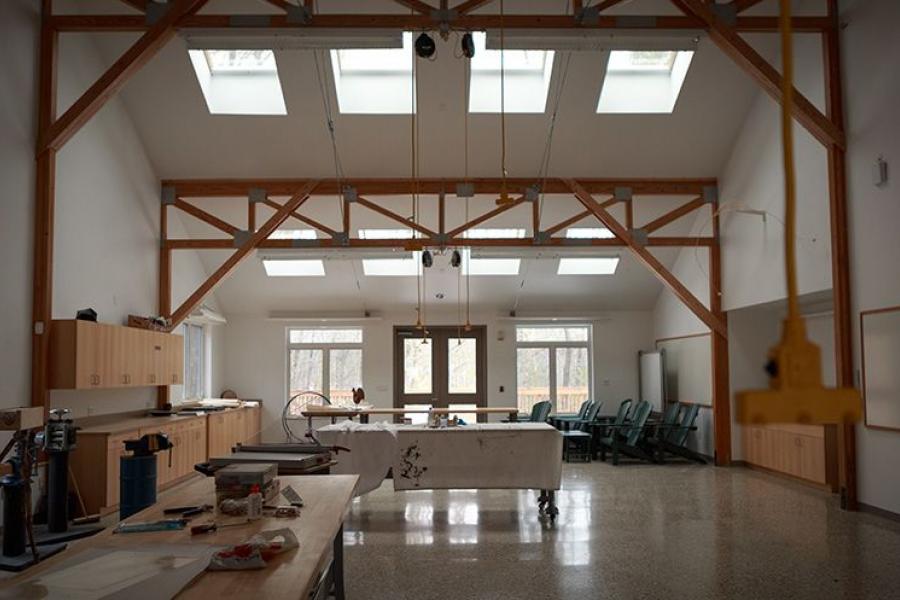 From the moment that Robin Crocker met Jean Noble Parsons at Interlochen Arts Camp, she knew Parsons was something special.

“All of the teachers were standing there, smiling, when we were introduced to them. Then there was Jean. She was leaning against the wall like this,” said Crocker, imitating Parsons’ position by crossing her arms and adopting an enigmatic expression and raised eyebrow. “I said to myself, ‘Wow, I have to study with her. This is someone who can teach me something.’”

Nearly 20 years after her death, Parsons is still teaching, both through her hundreds of successful students and through the Jean Noble Parsons Center owned and operated by Eastern Michigan University. The center, located on Parsons’ 86-acre property 18 miles northwest of Interlochen, is the perfect intersection of Parsons’ interests: a place where students can study art, science and psychology in a pristine pine forest.

In 2015, Robin Nelson Crocker (IAC/NMC 78, IAA 78-80)—now a sculptor, architectural designer and digital artist—returned to Interlochen for her 35th class reunion. While mingling with her former peers, Crocker ran into Lina Dean, who worked as a visual arts instructor while Crocker was a student. “I’ve just come from the Parsons Center,” Dean told Crocker.

Later, after the day’s activities had ended, Crocker drove out to Parsons’ property for the first time since teaching a patina class there for Interlochen Arts Academy sculpting students in 1991. She eagerly explored the site, peeking into the windows of the familiar structures and the newly completed Eastern Michigan University buildings. A few hours of online research later, Crocker devised an ambitious plan: to create an art installation at the site telling the story of her friend and mentor, Jean Noble Parsons.

A life of art

Jean Noble Parsons was born in Bridgeport, Connecticut, on Sept. 6, 1929. Born into an artistic family—her grandfather was a photographer in the early days of the medium—Parsons quickly developed a love of and aptitude for drawing and painting. Parsons enrolled at the University of Florida, receiving her B.A. in Commercial Art. She continued her studies under Boris Blai at the Tyler School of Art while working at the nearby Temple Hospital as one of the first-ever art therapists.

After her fiance died in the Korean War, Parsons moved to New York and enrolled in the prestigious John Robert Powers Modeling School, which has produced luminaries such as Grace Kelly. For the next several years, Parsons worked in the New York fashion industry as a photo editor, stylist, liaison and model.

A few years later, Parsons left fashion to pursue her interests in the visual arts, particularly in ceramics. She received her master’s degree from the Cranbrook School, where she studied under Finnish ceramics artist Maija Grotell. Parsons took an additional six-week ceramics course at Alfred University, and received a Fulbright Scholarship to continue her studies in Denmark.

In 1962, Joseph Maddy recruited Parsons to head the Visual Arts department at his brand-new Interlochen Arts Academy. How Maddy found Parsons is unknown, but the two quickly bonded over their mutual passion for the arts. The fledgling arts school, however, was strapped for cash, and Parsons was required to build her program from the ground up. After borrowing classroom space from other departments for the first few years, Visual Arts moved into a maintenance garage next to the Maddy Building.

Parsons continuously campaigned for better materials and facilities for her program, hand-drawing many sketches for future visual arts buildings. She also played a crucial role in the building of the Dow Center for the Visual Arts: Barbara Dow was a close friend of Parsons, and through their friendship, Parsons helped negotiate several sizable gifts for the visual arts building. Parsons never taught in Dow Center for the Visual Arts, but the ceramics studio in the new facility bears her name.

Parsons would remain on the faculty at Interlochen Arts Academy until her death in 2000. During her 38 years at Interlochen, she taught hundreds of students, upon whom she left an indelible impression.

“Easy” isn’t necessarily a word her former students would use in remembering Parsons and her classes: she often came across as stern, and her encouragement was often subtle. “She was hard as rocks,” said John Church, Parsons’ colleague and longtime metalsmithing instructor at Interlochen Arts Academy. “Any kid that got through her classes really had something.”

However, Parsons understood that “easy” didn’t help her students succeed. “Jean was demanding,” Crocker said. “She would not accept anything but the best. She was always encouraging us to do better and bigger.”

While encouraging students to think big, Parsons also encouraged students to think small, helping them focus on the minutiae of each work they created. "The attention to small detail that is needed in implementing my designs today—that’s something I always look back on from my conversations with Ms. Parsons,” added Carl Kamph, a toy designer for Fisher-Price. “She always took the time to question why you were doing something. She wanted you to be thoughtful about why you were executing it the way you were. She took the extra time to get to know each student as a person, and work with our strengths. She was very good at identifying our weaknesses, and creating a program around each individual student."

Fellow Interlochen alumnus and designer Roger Thomas agreed. “She was committed and driven, and I admired her because both she and her students stayed the latest and worked the hardest,” Thomas said in a 2015 Crescendo profile. “She was very demanding, but I think that made us grow the most.”

As Thomas alluded, the visual arts building never closed during Parsons’ tenure: students worked late into the night on their projects, while Parsons ran the kiln in the ceramics studio. Her rigorous teaching and high standards resulted in a level of prowess in her student that often met and exceeded the college level.

“She never treated her students like kids who weren’t ready,” said Crocker. “She took us from novices to a strong artistic awareness.”

Her advice extended outside the studio too, showing students how to live holistically artistic lives. “I am reminded daily of Ms. Parson's rule to live by: ‘Wake up, make your bed, eat your oatmeal,’” said Ken Jones Jr., a former Polo Ralph Lauren designer and curator at Ken Jones Jr. Fine Art. “It's a mantra about creatively seeing, preparing and fueling one’s day. She is a figure whose teachings will always guide my artistic life.”

In late 1999, Parsons developed cancer, passing away on Jan. 17, 2000. Parsons’ executors were surprised to find that Parsons—who lived like a pauper, growing her own vegetables and wearing her father’s old overcoat—had amassed a fortune and owned 86 acres of forested land.

Although Parsons left no heirs, she did leave a vision for how her assets should be allocated. Besides her artistic interests, Parsons had a deep, lifelong love of animals, nature and conservation which often appeared as motifs in her art. Parsons dreamed that her property and funds would be used to create a place where art and biology could be studied in an integrated fashion, yet where the ecological integrity of the property would also be protected.

The executors of her will created a competition and solicited proposals for the site from higher education organizations throughout the state of Michigan. In late 2000, the executors selected Eastern Michigan University to receive the site and the funds.

In 2010, Eastern Michigan University added three modern buildings—a dormitory, a dining hall and a studio—to the existing buildings on the site. Parsons’ home is now a residence for instructors and guest artists; her original studio, still filled with unfinished ceramic vessels, is available to the artists who study at the site. The site also includes Parsons’ hand-built gas kiln, which is still operational.

Nearly 40 years after her first summer at Interlochen, Crocker has returned to northern Michigan to honor Parsons’ legacy. Crocker arrived at the Parsons Center in November as the winter 2016-17 artist-in-residence to create an installation about Parsons’ life and career. On April 1, Crocker unveiled her installation at an invitation-only event at the Parsons Center.

The installation is in three distinct units. The first, about Parsons’ early life, features historic photos from Parsons’ youth. Most of these images were created by Parsons’ grandfather; a few, however, were taken by longtime Interlochen Center for the Arts photographer Wayne Brill. These intimate photographs will be displayed in Parsons’ home—now a residence for faculty and guest artists—and will not be open to the public.

The second unit, displayed in the entrance to the communal dining hall, commemorates Parsons’ artistic achievements. “Jean was somewhat underrated as an artist during her lifetime, so I wanted her art to be the first thing that people see,” said Crocker. Most of Parsons’ works were sold at auction following her death; the few that remain in possession of Eastern Michigan University are kept out of public spaces for safekeeping, so Crocker’s installation features photographs of Parsons’ art rather than physical works. The prints of Parsons’ works are overlaid with scans of Parsons’ notes, including ideas, glaze experiments and chemical recipes.

The third unit is dedicated to Parsons’ educational journey as a student and a teacher, the segment which is closest to Crocker’s own heart.

“I showed up at Interlochen as a drawer and a painter, but Jean helped me realize that there’s a lot more to art,” she said. “Today I work digitally, but I wouldn’t be as successful as a digital artist without learning the plastic arts.”

Crocker is not alone: Parsons’ tutelage put countless young artists well on their way to successful careers in fine arts. Which is, perhaps, her greatest legacy of all.

“There are so many alumni who just adore her,” said Crocker. “She was a force to be reckoned with.”