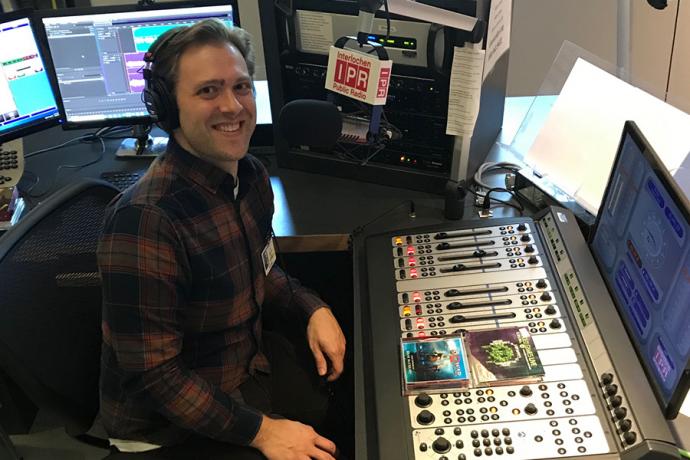 Gameplay host Keith Brown in one of IPR's recording studios.

Today, video game music is as diverse as the multitude of universes represented within the game world. Modern gamers enjoy lush soundscapes of sweeping orchestral scores, original pop songs, minimal piano melodies, electric guitar riffs, and more—often with several genres represented in one game. Most video game soundtracks would not be out of place in a movie theatre, concert hall, or even a classical music station.

“I want to share how artistically diverse and satisfying video game music is and help listeners become aware of a whole universe of art and music that they might not know about,” Brown says. “I want to instill a level of appreciation for all the great game music that has been written over the past 40 years and showcase what is being made by new artists.”

The show’s 13-episode pilot season caught the attention of public radio stations in Rochester, New York, and Toledo, Ohio, which now syndicate it. On June 12, Gameplay returned for its second season. Here, Brown chats about the origins of the program, his favorite video game soundscapes, and what’s in store for the new season.

How did the idea for Gameplay come about?
Back in 2019, I read an article in the New York Times praising a recently released game for its incredible art and music. It got me thinking about playing game and film music on the air. Film and video game music is a powerful tool for attracting new listeners because it’s very accessible to those who might otherwise feel intimidated by classical music.

[IPR Executive Director] Peter Payette could tell that I was really passionate about the idea and asked me if I could do a weekly show of game music. I said, “yes, of course!” As soon as I started putting together Gameplay, it was so easy to find incredible music with appeal for listeners who have no connection to games.

Over the next year, I worked closely with [IPR Music Director] Amanda Sewell. As a musicologist, she has lots of experience writing about music at every level and really helped me hone my writing for the show. Together, we developed a show format and put together a 13-episode test season.

You’re a professionally trained opera singer and voice actor. How did you get involved in public radio?
After I graduated from the Cincinnati Conservatory, I focused on professional singing for nearly 10 years. Towards the end of that time, I moved to Interlochen with my wife, Laura [Osgood Brown], who is the director of the opera workshop at Interlochen Arts Academy. I ended up getting connected with IPR, where I started as a fill-in classical announcer. I also got into working as a voiceover artist at that time. I’ve recently started dialing back on my voiceover career to work full-time at IPR as a producer and host.

As a person who is passionate about both music and gaming, did you always notice the music in video games, or was there a particular moment that made you aware of what was happening musically?
I’ve always loved game music. The chip music of arcade cabinets and the early systems of the 80s is attached to these wonderful, nostalgic memories. I can remember getting a thrill when I would hear the main theme from The Legend of Zelda. It’s such an iconic theme; it’s been reorchestrated and reinterpreted so many times, both in the series and by fans.

Another great memory was playing Final Fantasy VII with my friends. It was a huge, really ambitious game. I remember being really impressed with the rich detail of the storyline and how there was new music happening all the time.

Another game that really stands out is Bioshock. The game is very spooky, horror-inflected, and full of terrifying creatures. The music is so tied into the story, and it really heightens the experience of trying to survive. It really stuck with me.

These melodies are tattooed on my soul somewhere. That’s something that I love about this work: being blown away by new music, just like I was when I was a kid. It’s a huge privilege.

What are you hoping that listeners learn through Gameplay?
My goal is to inspire people. For people who are gamers, I hope Gameplay brings them back to their childhood and gives them warm fuzzies, yet is exciting too. For people who have never played games, I hope that it opens their eyes and gets them excited about the possibilities. Video games offer every kind of music imaginable, and even some kinds we can’t imagine. There’s not just something for everyone—there’s lots of content for everyone.

If you had to make a list of essential video game music for first-time listeners, what would you put on it?
For anyone who loves orchestral music, the Distant Worlds albums are a great place to start; they feature orchestral arrangements of songs from the Final Fantasy series. The soundtrack from Kingdom Hearts 3 is also great for orchestra lovers—there are some beautiful pop songs on the album as well.

If you’re a fan of electric guitar, try Video Games Live, another series of albums. They do covers of gaming’s greatest hits arranged for orchestra and often fronted by electric guitar.

If you’re into jazz, check out CupHead. It has an incredible swing and ragtime soundtrack that is full of homages to great jazz artists. There’s also the Eight-Bit Big Band, which performs jazz arrangements of standards from series such as Sonic the Hedgehog, Mario, Metal Gear Solid, and more.

I’d also recommend music by composer Jessica Curry. She has written music for several games, but my favorite score is Everybody’s Gone to the Rapture. It’s really lush orchestral music with lots of live choir. Another great video game composer is Austin Wintory, who wrote the music for Abzu. He’s the first video game composer to be nominated for a Grammy Award.

What can listeners expect in Gameplay’s second season?
This season, my goal is to represent as many eras and styles as I can. The diversity of the music I’m going to play is truly incredible: from beloved classics from the late ‘70s/early ‘80s arcade games to releases from 2021 and from kid-friendly games to horror games. There’s a really rich range of instruments as well: orchestra, jazz combo, funk-fusion ensembles, string quartets, brass quintets, and more.

Some episodes will focus on one game, while others will have a theme such as water levels or racing. We’ll also have a few special guests, including Emmy Award-winning composer Laura Karpman (IAC/NMC 70-74) and Dr. Matthew Thompson, a leading video game music researcher from the University of Michigan.

The second season of Gameplay premiered on June 12, 2021. Tune in to Classical IPR Saturdays at 8 p.m. ET or Tuesdays at 6 p.m., or listen on demand at interlochenpublicradio.org.