From Newton to Faraday, five ways a pursuit of arts can improve academic studies and overall outcomes. 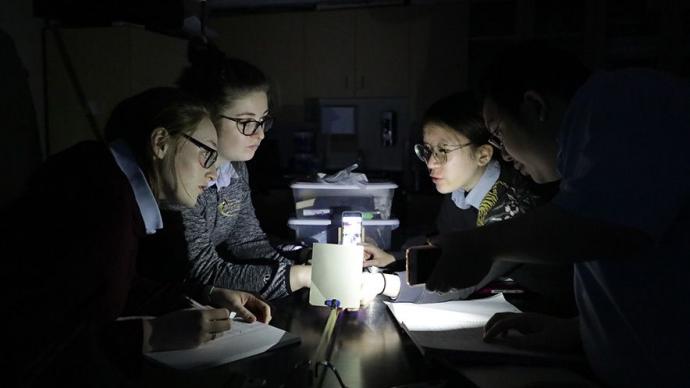 Arts Academy students conducting an experient in their Physics class.

Researchers at Michigan State University crawled the biographies, memoirs, and obituaries of members of The Royal Society, the U.S. The National Academy of Sciences, and of Nobel Prize winners, and found that Nobel Laureates were nearly three times more likely to be involved in the arts than the general public.

The first winner of the Nobel Prize in Chemistry, J.H. van ’t Hoff, suggested this very correlation over a hundred years earlier, noting that creative endeavors through the arts contribute to the success of cutting-edge scientists. He argued that science, just like the arts, is, “the pursuit of an idea which exists only in the mind…and represents the result of imagination.”

That is not to say that all who pursue the arts will go on to win the Nobel Prize, but that the study of one begets the study of the other. With that said, below are five science-based claims that support the idea that arts education improves academic performance.

Students involved in arts education are less likely to act out
A recent study by Rice University’s Kinder Institute for Urban Research found that students involved in consistent arts educational experiences were more compassionate to their classmates, and thus had fewer disciplinary infractions. This two-year study concluded that access to arts education created a richer school atmosphere, gave students a sense of purpose and ownership, and increased mutual respect for students and teachers alike.

Arts training improves mental cognition
A study posted in the academic journal Frontiers in Neuroscience reported that childhood musical training literally changes the brain's neuroplastic structure and function, which improves verbal abilities, second language proficiency, non-verbal reasoning, and general intelligence. The study alludes to the fact that the effects of youth arts education are felt well into adulthood because the brain’s “window of opportunity” to develop cognitive or rhythmic skills stays open longer for adults who are products of arts education.

The arts improves your memory
A 2019 article in the journal Trends in Neuroscience and Education reported that students who were taught science with techniques integrated from arts education had higher recall of the subject matter. Researchers hypothesized that the arts opened creative approaches for students to interact with non-arts related academic content. Simply put, incorporating the arts into traditional curriculum helped students remember their science lessons.