The evolution of Emiko Shinozaki

Alumna follows her dreams from medicine to music to fashion. 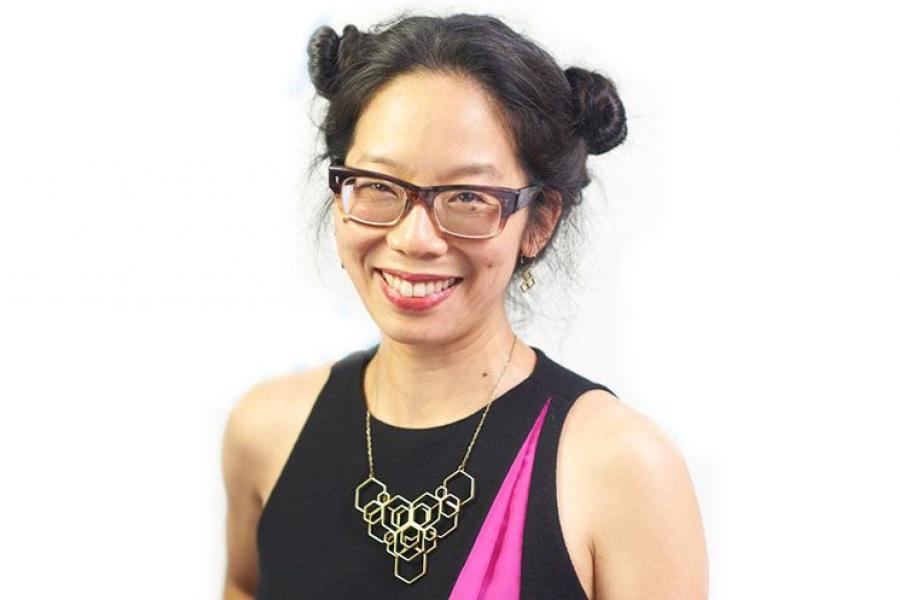 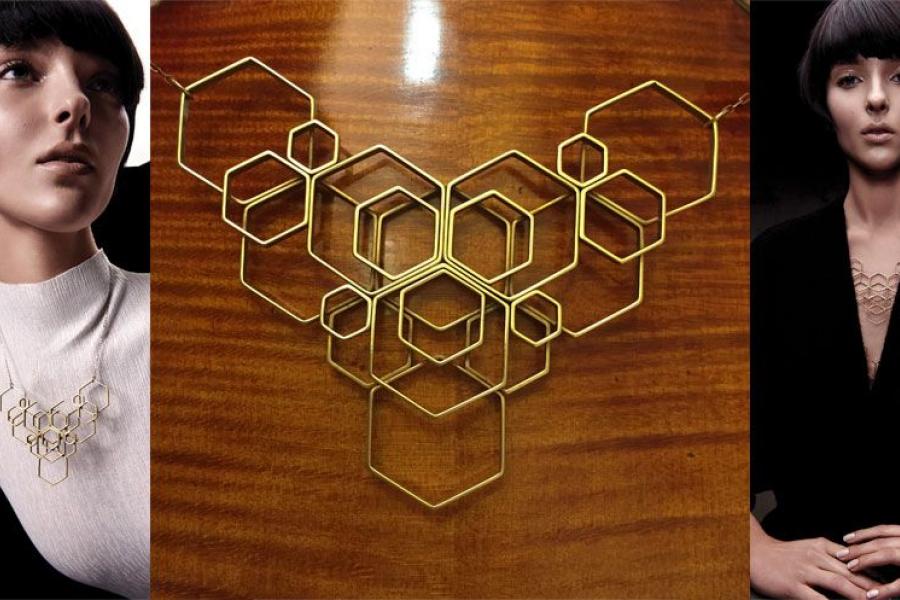 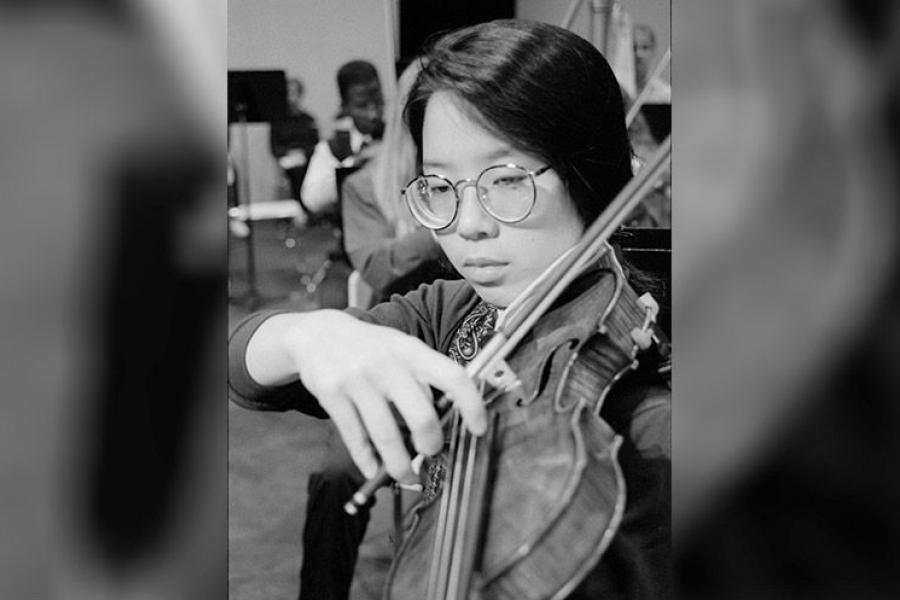 Emiko Shinozaki as a violin student at Interlochen Arts Academy. 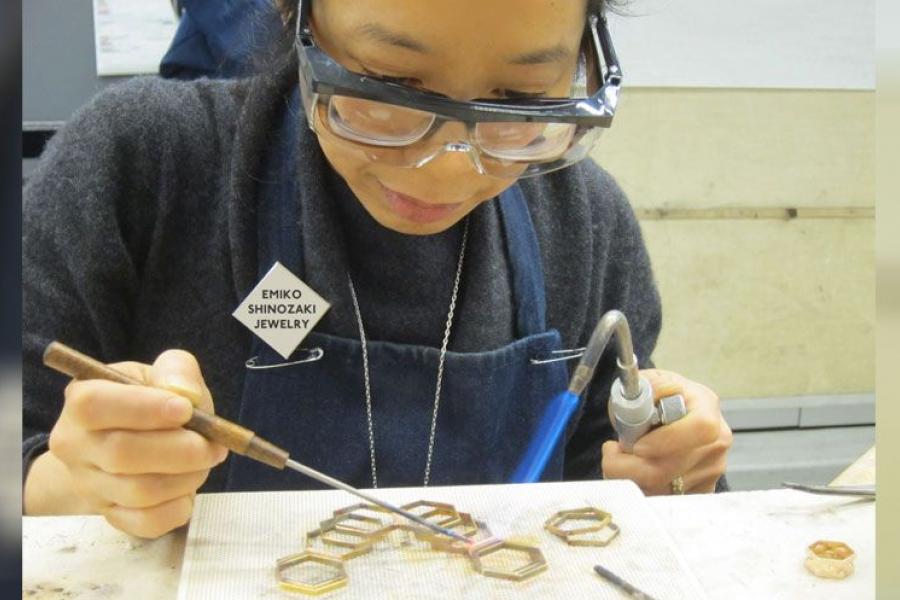 Shinozaki works on a piece.

Some have an innate sense of calling. For others, professional goals evolve as new interests and passions emerge.

For Jeweler Emiko Shinozaki (IAA 89-90), her work has always been in progress.

As a child, Shinozaki was convinced that she would follow her family into the medical field. “My parents are first generation Japanese immigrants,” she said. “In Japan, there's a strong belief that families belong to a certain profession. My entire family were doctors or clergy.”

While Shinozaki’s relatives were doctors by trade, they were also avid amateur musicians. “My entire family plays musical instruments,” she said. “I grew up with and appreciated the classical genre from an early age.”

Shinozaki picked up the violin at age 4. She quickly exhibited a musical aptitude that matched her academic prowess. By the end of her junior year of high school, Shinozaki’s budding musical talents began to compete with her medical aspirations.

“It was a very intense transitional period for me,” she said. “I was at the tipping point of being really serious in classical violin. I was thinking to myself, ‘I really like playing classical music, and I'm kind of serious about it, but I'm probably going to become a doctor in the end.’”

At Interlochen, Shinozaki quickly realized that she would need more than natural talent to succeed in classical music. “Up to that point, I was a big fish in a small pond, and I wasn’t amazing at practicing,” she said. “I suddenly realized, ‘I really have to practice and prepare for auditions if I'm going to continue with this.’ I had to learn how to practice, learn how to play a concerto, learn how to learn, really.”

Interlochen’s academics were equally eye-opening. “I was blown away by the quality of the academics,” she said. “I discovered all these things that I'd never been exposed to before. It was almost like being in college.”

The tension between music and medicine continued after Interlochen. Shinozaki enrolled at Oberlin College, where she earned degrees in violin performance and pre-medical studies. Eventually, music won out. “I made a conscious decision not to go to medical school,” she said. “I even got as far as the MCAT (The Medical College Admission Test) before I went, ‘I'm gonna give classical music a whirl and see what happens.’”

It was a difficult decision for Shinozaki’s family. “They didn't understand it,” she said. “I found a letter from my grandfather that basically said, ‘I know that you want to go into classical music. I'm sorry that I can't give you advice about that or help you build that career.’ He said that I should try to find a mentor. The funny thing is, I didn't find anybody. I just did it myself.”

Shinozaki relocated to New York, where she established herself as a freelance musician and violin instructor. “When I moved to Brooklyn, it was such a crucial moment,” she said. “I was so excited that I was able to explore other genres of music and other artforms.”

Shinozaki’s exploration led her to the Fashion Institute of Technology. “The truth is, I just wanted to learn how to shorten my pants,” she said with a laugh. “But then, I took an industrial techniques class, and I loved it. I thought ‘oh, I like this class, so I'm going to take another.’ All of a sudden, I had taken dozens of classes, and realized I had finished a full year in the program.”

In 2006, Shinozaki quit performing and teaching music to attend FIT’s one-year program in Italy. “I wanted to explore other, perhaps more tangible, realms of artistic expression,” Shinozaki reflected. “I loved fashion, and fashion opened the door to accessories design.”

Upon her return from Italy, Shinozaki began studying leather goods with the intention of creating handbags. “I started working with metals because I needed hardware for my bags,” she said. “I ended up loving the hardware more than the bags, which led me to jewelry. Once you understand the process of design, you can apply it to everything.”

Today, Shinozaki is the creator and owner of Emiko Shinozaki Jewelry, a Brooklyn-based studio that produces handmade necklaces, earrings, bracelets, and rings. The collection’s unique designs reveal that Shinozaki’s past loves are still with her.

“The designs are all inspired by organic chemistry, by structures that I saw when I was studying medicine in college,” she said. “I’ve stayed with the hexagon motif for a number of years. A lot of people are doing geometric-shaped jewelry pieces right now, but when I started, no one was. What sets me apart is that I take a universal concept—a geometric shape—and take it as far as I can down that path of development. That's the process I love: taking a thing that exists everywhere, and making it simple yet complicated at the same time.”

Shinozaki hasn’t forgotten her musical roots either: her music background is evident in her latest project, skin jewelry that functions as wearable technology. “When I was a musician, I never wore jewelry,” she said. “It always bothered me: your earring would hit your violin, your rings would get in your way, and your bracelets were constricting. Now, I’m a jeweler who doesn’t play music. I really wanted to find a way to connect my two passions. The best thing I could come up with were these wearable, metallic, jewelry-like objects that were actually touch-capacitive sensors that triggered sound.”

Working with technology developed at MIT, Shinozaki workshopped the concept through a residency at the Museum of Art and Design. “I think people really liked it because it was surprising,” she said. “They would touch this thing, it would make this sound, and the expression on their faces were just so amazing. I got to have so many meaningful interactions with the visitors.”

Years after learning dedication at Interlochen, Shinozaki still considers it one of an artist’s greatest assets. “The discipline, intention, and intensity needed to succeed in any field can be carried to any other field,” she said. “If you’re able to do that, you’ll do really well in your new area of interest.”

Shinozaki also encourages young artists to follow their dreams and find a career that they love—no matter how long it takes. “You have to really be committed to whatever you're doing,” she said. “If you feel like you want to leave your artform, you probably should. There’s no harm in exploring whatever’s tantalizing you.”