From saying more to small breakthroughs. A conversation with noted playwright Sam Collier. 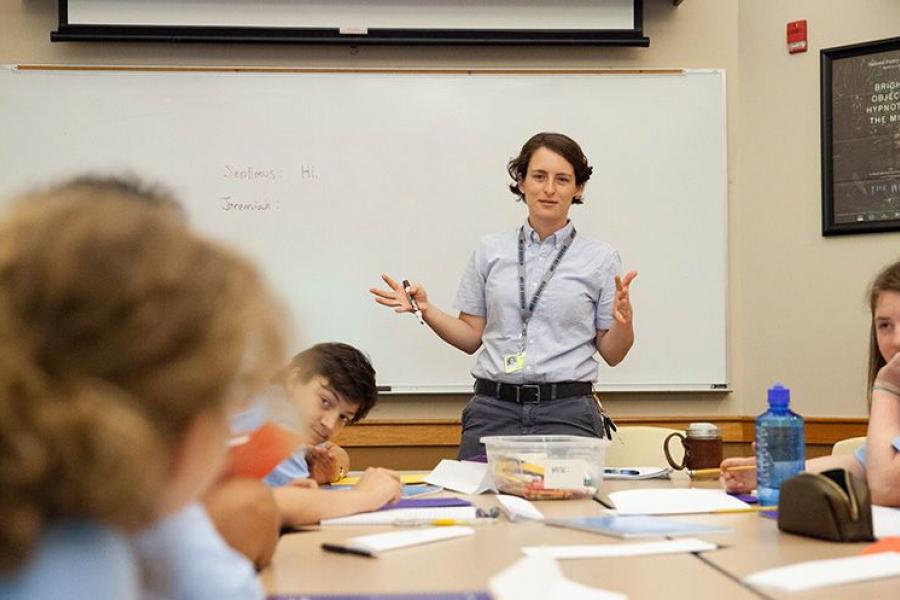 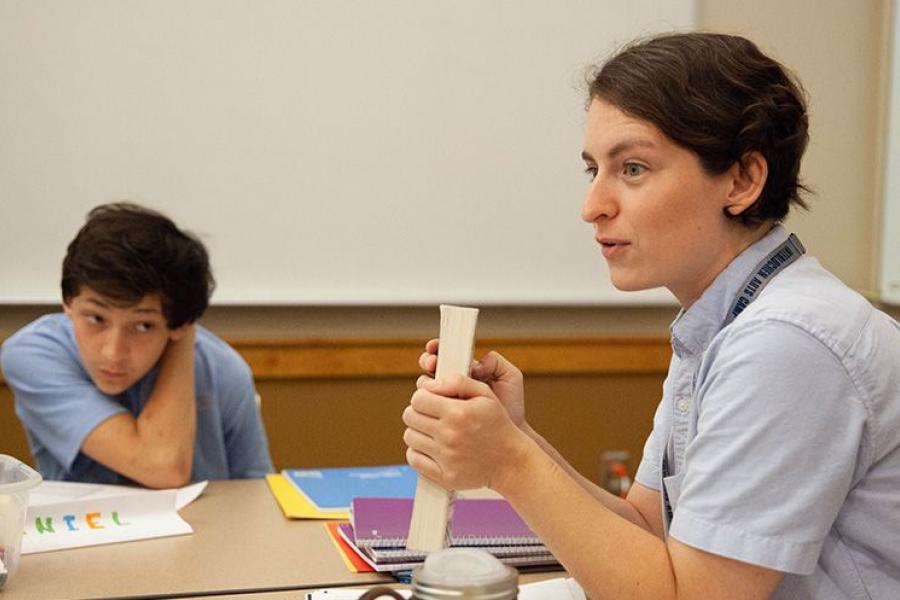 As a child growing up in Washington D.C., Sam Collier always loved writing and theatre, but she didn’t connect the two until she studied playwriting in college.

“I find myself moving fluidly among genres, and I don't often know when I first sit down to start a piece whether it's going to become a play, a poem, or a monologue,” Collier said.

Now, she’s a playwright, poet, teacher, and theatre artist who brings this interdisciplinary approach to her students as an instructor of creative writing at Interlochen Arts Camp.

Her plays have been produced or developed by theatres and festivals around the country, and her poems have appeared in various literary journals and magazines. She has also taught writing on the elementary, high school, and collegiate levels, and is currently a writing fellow with the National Writers Series of Traverse City.

We sat down with Collier to find out how she explores themes of queerness, womanhood, and climate change in her work and why she’s always encouraging her students to “say more.”

How did you find your way to Interlochen?
For the past two years, I've been teaching in Traverse City, where I worked with Teresa Scollan, an alumna and former writer-in-residence here. She suggested I apply to teach here, but I actually heard about Interlochen all the way back when I was a kid, because I had friends who went to Camp here. I knew about it as a kid and then I found out about it again as an adult and found my way here as a teacher.

You’re a playwright, poet, and theatre artist. How did you find your various crafts and how did you come to understand them as they connected to one another?
I've been a writer from a very young age, and I've always loved theatre. I was the kind of kid who always made my cousin and my sister be in plays from about the age of five. I would tell them where to stand and what to say. But when I was a young person, I never saw writing as connected to my love of theatre. I saw them as two separate things until I went to college and studied theatre. I found my way to playwriting and just completely fell in love with it. I was a theatre major in college, mostly focused on playwriting.

Then, in my final semester, I took a poetry class—actually with another Interlochen graduate and teacher Karin Gottshall—and that poetry class changed my life. That was when I really started to think of myself as a poet as well. I went to graduate school for playwriting, but all along, I've been writing poems. Then, as a theatre person, I direct sometimes and do dramaturgy because that's the nature of theatre—you just help out wherever you can.

Do you bring that multidisciplinary approach to your students?
I currently teach creative writing electives, so my students are majoring in other things. It's also multigenre, which means we do a little bit of this and a little bit of that. I sometimes bring my theatre experience as an example, and it is kind of a smorgasbord of genres, which is perfect for me.

Why do you think that that multidisciplinary approach is important? Do you think it's particularly important in this time and place, or do you think it's just generally important to be well-rounded as an artist?
Both. I think especially when you're a kid at camp, it's really fun to get to try lots of things and to learn how one art can inform another. It's really cool to show students that they don't have to be stuck in one silo of form or even one art discipline. They can be a creative person of many talents.

You’ve been a teaching fellow at Front Street Writers in Traverse City since 2017 and have taught creative writing here for two years. Why is teaching important to you personally and, more generally, why is arts education for young people important?
I love teaching. It's my favorite thing to do. This is such a cliché, but I learn so much from my students. Young people have not yet been convinced there's one right way to do things, so they're much freer and more open. They're willing to question a set of rules they're given. I find that really refreshing and inspiring.

And arts education is essential. It teaches us so much about how to be in the world, how to understand other people and work with other people. It gives meaning to life. Especially now when so many schools are getting rid of arts education, it's so important to have a place where kids can go in the summer and be surrounded by the arts.

Your play thing with feathers is being presented at the Women's Theatre Festival in Raleigh, North Carolina. Will you tell us about that play and its themes?
I wrote the play when I was in graduate school. It's a love story about three women, and two of them can turn into birds. The play is really about a moment of climate catastrophe. The world is falling apart, but we have these characters who are evolving into the next thing they can be. I didn't start out with the idea of women who could turn into birds; I started with the language, and it led me to that place. I just went with it.

Do you find yourself exploring different facets of your identity in your work?
Yes, definitely. Part of the reason I became a playwright was because when I started acting, I was just so frustrated with the roles available for women in both classic and contemporary plays. At least, a lot of the plays I saw being chosen by directors and producers were mostly about men. If there was a woman, she would be somebody's girlfriend who would be there for one scene. And I found that so frustrating. When I would audition, the room would be entirely full of women, and I would think, “Only one of these very talented people is going to get this role.” So I wanted to create stories about women, and I wanted to create queer stories that went beyond the coming out narrative and explored the full capacity and complexity of queer lives.

Now, I've really moved more in the direction of environmental themes. I'm really interested in theatre of climate change and how human beings navigate their relationships with the natural world. I haven't seen that on a lot of stage, so I think it's something that's really exciting to explore.

And things with feathers does all those things. How do you walk your young students through that process of both exploring their personal identities and exploring the things they care about?
I find with young people, it happens naturally. When I've taught college, I have to draw it out a little more, because they might have been taught that the things they want to write about themselves are not valuable or worthy. But I find with younger people—especially the intermediate students here at Arts Camp—if I set them up with a prompt, they're going to write about things they care about. It just happens naturally, and so I don't have to necessarily make that happen. But what I can do as their teacher is show them a lot of different examples of writing that explore different identities and perspectives, so that they see there's not one way to tell a story.

What is the most important advice you give to your students?
My high school students from this past year at Front Street Writers said I'm always telling them, "say more," which I actually think I got from one of my professors. I often say to them, “Keep going” or “say more,” because high school students especially have gotten very used to saying one word or one sentence and then stopping. They get self-conscious or think they don't have anything interesting to say. Just when they're getting to something a little bit weird, they stop. The most important thing a teacher can say is, “Keep going. Push past that. Make it weirder.” Even if you think this is not worth writing, keep writing, because what's on the other side of that hump is usually the most interesting part.

What is the most important thing your students student have taught you?
What always surprises me about every group of students is just how creative they are and how much they can think beyond the unconscious limits that I've set on what's possible for a story. I'm going to use an example from before Interlochen. One time years ago, I was teaching a group of fifth graders in playwriting, and one girl wrote a play about a kid whose head was shaped like a box, so her family used her as a television. Her objective in this play was to find a doctor who could make her head round so her family would stop using her as a television. I mean, there are just so many illogical things about that I can't even begin to understand as an adult. But to her, it made complete sense, and it worked as a story. It was funny and absurd and had all of those themes of identity and coming of age. That's the kind of thing I learn from them is how to be more creative.