The Instructor of Theatre shares the differences between stage and screen acting, advice from her famous teachers, and the importance of being fearless. 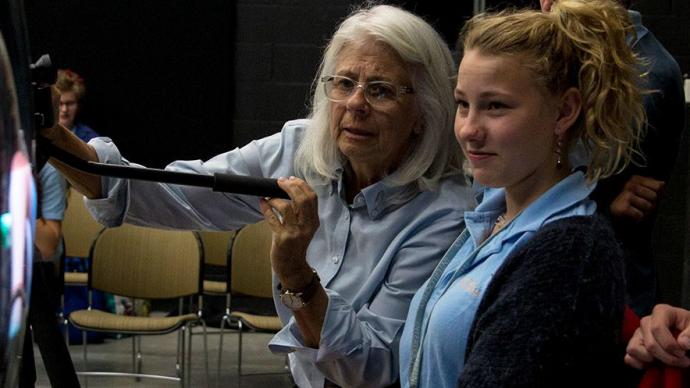 It’s a trait that Cooper developed while studying with legendary improvisation instructor and Groundlings founder Gary Austen, and it’s served her well. Cooper’s career has seen her share the screen or stage with the likes of Angela Lansbury, Danny DeVito, and Mary Beth Hurt—and move hundreds of miles from her home in New York City to accept a teaching position at a school in Michigan’s northern woods.

Cooper is an 18 year faculty member of Interlochen Arts Camp, where she teaches acting technique and audition skills classes for high school actors. She also coaches the casts of the repertory and musical theatre productions, and taught the Camp’s first-ever acting class for vocal arts majors during Camp 2019.

How did you get started in acting?
I was a mischievous middle schooler, and I think my parents wanted me out of the house! They enrolled me in a youth theatre group that taught kids for the whole Saturday.

I never thought of it as a career, but I’m curious. In the theatre, there’s an endless amount of things to learn and study. Once you start, you can go on and on. It’s forgiving of age.

How did you first hear about Interlochen?
I first heard about Interlochen from Ed Frohlich, who knew my family. I was a young actress in New York at the time, and Ed was trying to convince me to apply for a job here. I had never been here. I thought it was a just a teeny little school in northern Michigan. When he told me that that job would include directing, I was sold, because I wanted to branch out into directing. I thought, “What a perfect place to practice! Who cares? I’m in the woods!” Little did I know that coming to Interlochen would create a lifelong passion for trying to create amazing with these young artists.

Why is arts education important?
All education is important, and we shouldn’t be afraid of learning outside the classroom. Arts education teaches you empathy. Empathy helps you to understand human nature and our connection to our history. It is so important, and that’s why the arts should be taught from kindergarten on.

You’ve done just about every kind of acting: Stage, film, television, commercial, and improv. What are some of the key differences between stage and screen acting?
Whatever character you’re creating, the process of acting is the same. What’s different is the size of your canvas.

There are a few other differences. The big difference is that on stage you can get away with a lapse in concentration for a nanosecond. On screen, if you think it, the camera sees it, so your concentration has to be solid. All the technical you work you do to develop a character has to be so strong, because if there’s any fear, the camera is going to smell it.

There’s also a difference in the energy level. On set, you’re waiting around a lot, and there’s a lot of stop-and-go. You may have created this beautiful scene, and you’re immersed in the moment, and then an airplane flies overhead. Ultimately, between directors and editors, you have no control over the final product. In the theatre, you’re in control, and that’s the biggest difference. You also only get one take on stage, which makes embracing failure even more important.

You’ve had the opportunity to work with several legendary acting coaches. What are some of the best lessons or tips you’ve learned from them?
I really was lucky: I studied with master teachers. Each one stretched a different muscle.

From Uta Hagen, I learned how to have a process to creating a role and how to observe myself and others. Herbert Berghof taught me to understand human nature. In life, we’re constantly fighting not to feel; we’re trying not to laugh, trying not to cry. But when we go on stage, many actors try to feel. It’s against what we do as human beings. Michael Shurtleff taught me about opposites and how to hit the many notes in a scene. Gary Austen was my biggest influence though. He taught me to be fearless.

Let’s talk more about Gary and about improvisation. Why is improvisation an important skill for an actor?
Gary was a master at insisting that we stay in the moment. He sniffed out anything that wasn’t true and forced us to be honest.

Improv is scary! It teaches you to trust your cast. You have to stay in the moment, listen, and respond honestly to what you’re being given. You can’t think about what you’re going to say. And so often, it doesn’t work. And that’s great. In the moment, you let it go and move on. You have to accept that things don’t work.

What do you find rewarding about teaching?
I love teaching because the young artists who come to Interlochen are the balm for any ache that anybody might have in their life. The ball is in their court, and I love being part of that trajectory. I was given such a great opportunity to work with these legends. I feel a responsibility to pass on what I learned—or should I say, my interpretation of what they taught me—to my students.

What’s one piece of advice you give to all your students?
The most important thing is to not be afraid of failure. You don’t have to be good, you just have to do it and love it. If you climb up to the precipice and jump off with the understanding you will splat, then you can get yourself up, jump off again, and fly. Without all those “splats,” you cannot go from being a craftsman to being an artist. To be an artist, you have to embrace failure.

Artists these days have so many opportunities at their fingertips. You can use your smartphone to make movies, you can make a web series that you can put on YouTube, you can make a one-person show and perform it on street corners. Start now. Create your own work. And as you’re creating, think about putting social security-age women in your work!

Learn about our theatre programs at Interlochen Arts Camp.