Beyond the barre: Costuming Swan Lake 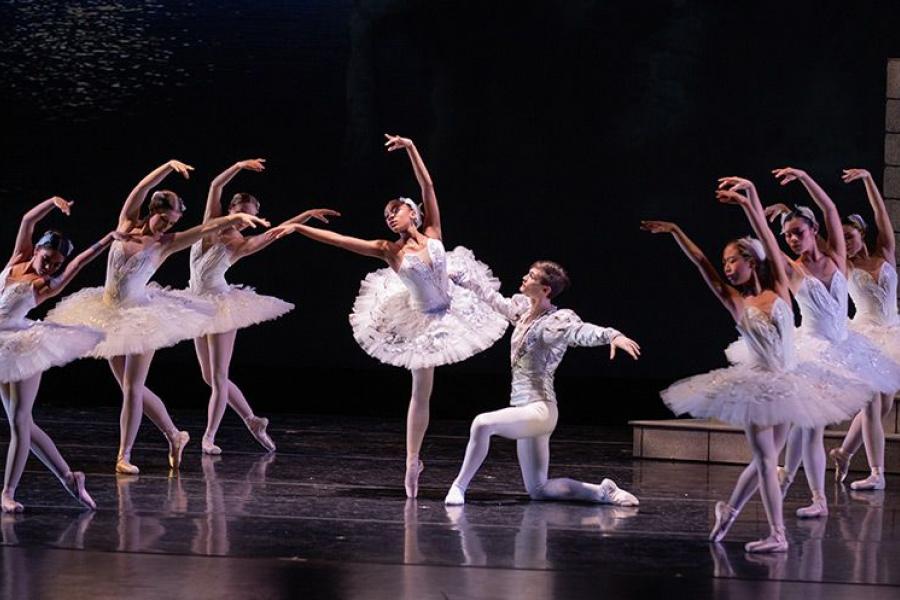 Odette, her maidens, and Prince Siegfried as part of Swan Lake by Pyotr Ilyich Tchaikovsky. 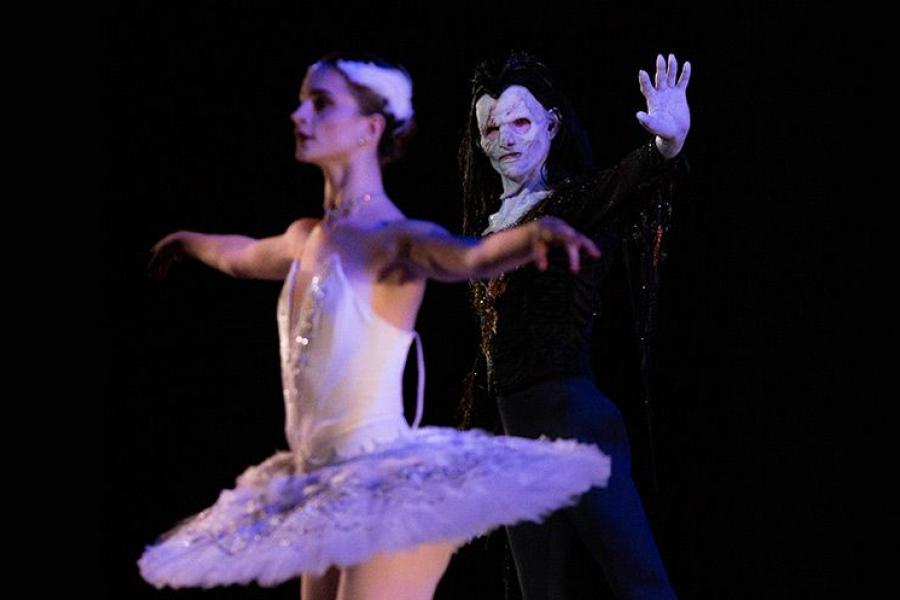 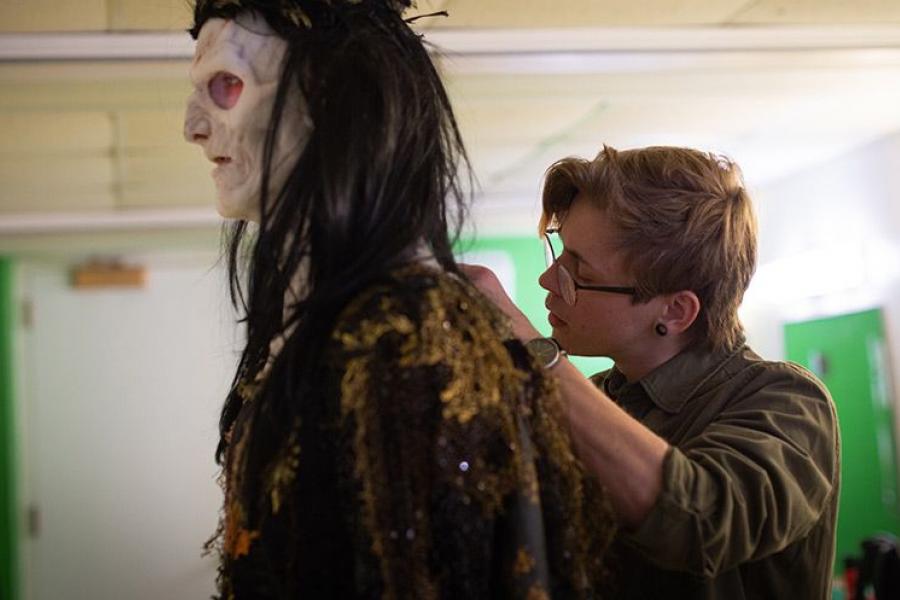 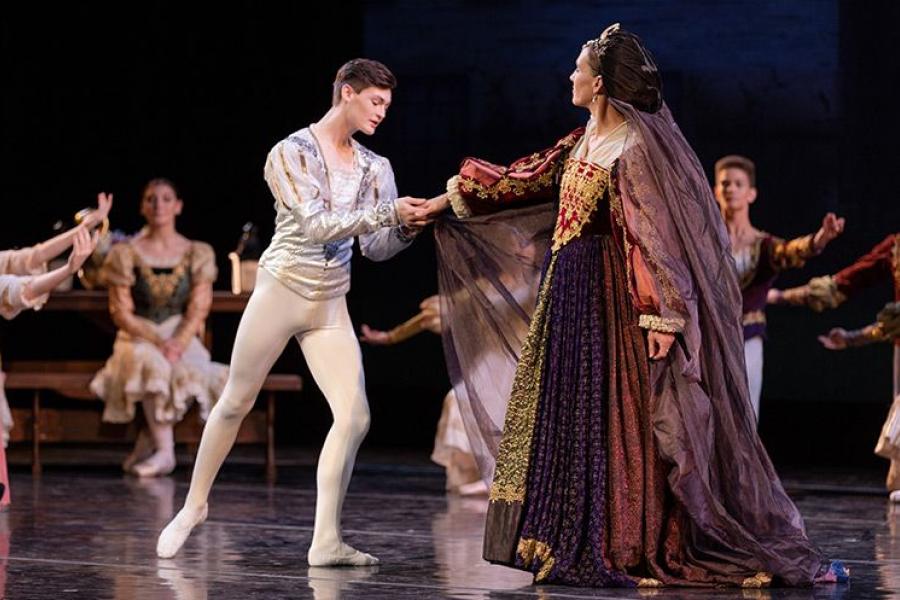 Prince Siegfried with the queen (played by Instructor of Dance Rachel James). 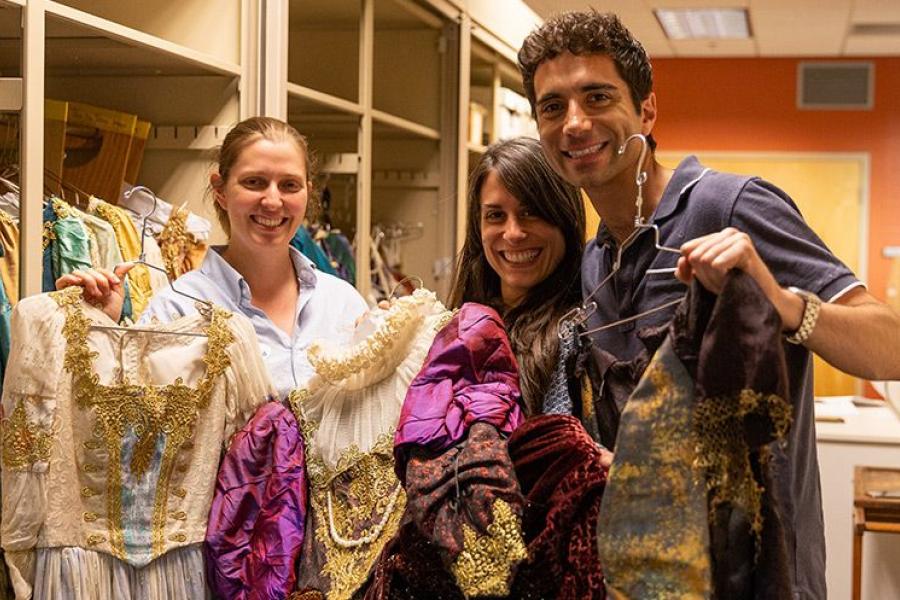 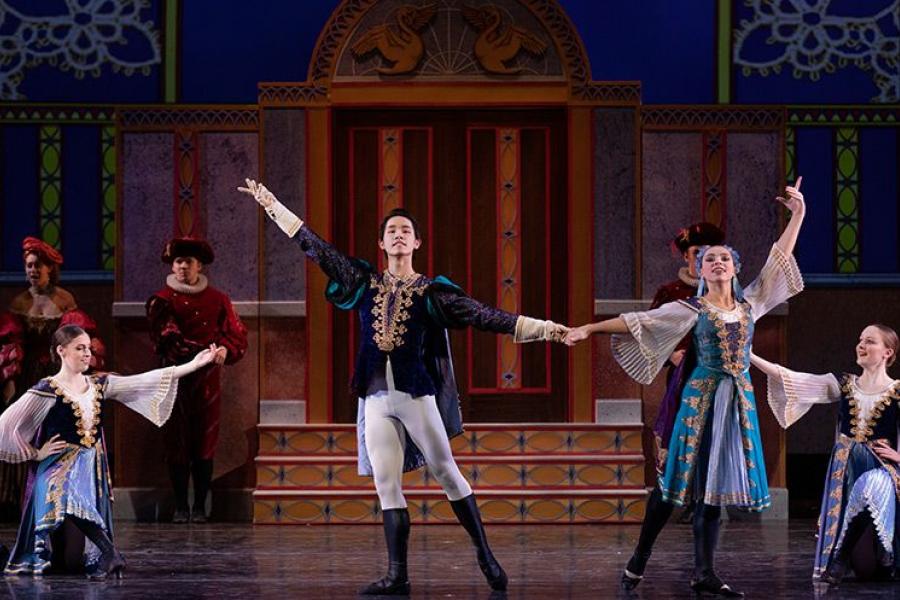 Dancers perform in the ball scene.

Pyotr Ilyich Tchaikovsky’s ballet Swan Lake is an ambitious undertaking for any dance company: It’s known as one of the most technically and artistically challenging ballets of all time.

Since its initial premiere in Russia over 140 years ago, Swan Lake has been revived, reinterpreted, restaged, and adapted countless times. This fall, the Interlochen Arts Academy Dance Company joined the long list of adapters.

Swan Lake tells the story of Princess Odette who is captured by the demon Rothbart and placed under an evil spell which turns her and her fellow maidens into swans by day and back into humans by night. The spell can only be broken if Odette finds true love.

While Interlochen Arts Academy has staged The Nutcracker and The Sleeping Beauty every other year for over a decade, this performance of Swan Lake marks the ballet’s first full presentation by Interlochen students. As a result, costume shop staff and volunteers needed to create an entirely new set of costumes.

“When we decided to do Swan Lake, we had to discuss how to build the costumes by December,” said Costume Designer Risa Alecci. “It normally takes us about a year to mount a new ballet.”

Morrissey reached out to a contact at the Boston Ballet about the possibility of renting the John Conklin-designed costumes from their 1990 production. Instead, the ballet offered to sell them; the purchase was completed with support from a donor who wishes to remain anonymous. In August, the 103 costumes arrived at Interlochen.

While the Boston Ballet’s costumes significantly accelerated the production process, they did not arrive stage-ready. Each garment needed minor repairs, new fastenings, and resizing before they were ready for Interlochen’s dancers.

Morrissey and Alecci also opted to make original costumes for all 14 swans—Odette, Odile (a mysterious and beautiful women who looks strikingly like Odette, but clad in black), and the corps of swans. To expedite the process, Alecci purchased stock tutu bases and the bodices from a ballet supply company. Alecci then added an additional piece of tulle, known as a plate, to the top of each tutu. Each plate is decorated with feathers, sequins, rhinestones, and a wing-shaped piece of lace. The bodices are also embellished with feathers and lace.

For the main swan roles, Odette and Odile, the plates and bodices receive additional decoration. Each bodice features a full, hand-sewn, beaded applique. To protect the designs—and the hands of the dancers cast as Prince Siegfried—Alecci added a layer of tulle over the beading on each bodice.

Luckily for Alecci, several of Interlochen’s volunteers are skilled at sewing. Many have volunteered their time to the painstaking process of sewing sequins and rhinestones. “I’m so thankful for our volunteers,” said Alecci. “They’ve been working long days—almost full time.”

Every fairytale needs a villain. While Alecci and the costume shop volunteers are focused on the swans, Morrissey has brought a familiar face back to campus to design the face of Rothbart: Arts Academy graduate Nicholas Winstead (IAA 15-17).

For Swan Lake, Winstead worked with Morrissey to develop an iconic villain; something that they hoped would jump out and be remembered by audiences. “[Morrissey] wanted something scary, but not repulsive,” said Winstead.

This task was a shift, as the role of Rothbart is usually portrayed as a large owl-like creature. Morrissey and Winstead ruled out the owl approach early on, and in the end landed on the concept of making Rothbart a regal yet haunting ghoul.

With cues from Morrissey and the ready-made, Conklin-designed costume, Winstead set out to create the bust and hands for Rothbart. Initially, Morrissey was interested in Winstead providing facial and hand appliances for Rothbart, but with several actors playing the role and a series of quick costume changes, prosthetics were ruled out.

Ultimately, Winstead designed a silicone mask and pair of hands from a lifecast taken of Arts Academy Dancer Zachary Brickson. The pieces fellow dancer Eli Diersing, who plays Rothbart in some performances, and the theatre students who serve as body doubles.

In the end, the villainous Rothbart looks strange and otherworldly, even if his story of jealousy and betrayal feels all too human.