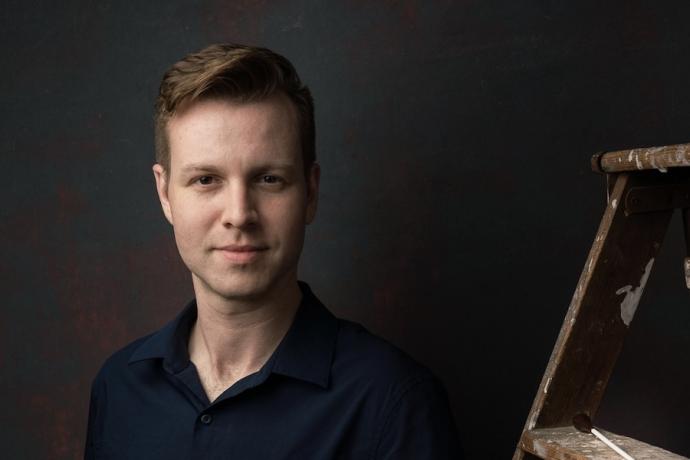 On Sunday, July 3, 2022, the World Youth Symphony Orchestra performs Hector Berlioz’s Symphonie Fantastique under the baton of Tristan Rais-Sherman. A Conducting Fellow at the Philadelphia Orchestra, Rais-Sherman has had a distinguished career in music and education—including appearances with the NEC Philharmonia, the St. Louis Symphony, Tulsa Opera, the Greater Bridgeport Symphony, and Syracuse Opera, along with performances at numerous festivals. This June, he was the recipient of a Career Assistance Award from the prestigious Solti Foundation U.S.

Creativity and Dedication
His career in music is marked by creativity and dedication. Though none of his family members are professional musicians, Rais-Sherman grew up surrounded by music. His mother and sister sing in choirs, and he has a sister who plays clarinet. As a young person, he initially focused on popular music; the instrument he liked best was electric guitar.

“I really wanted to be a rock star,” he remembers. “It wasn't until I was about 14 and I saw a performance of Mahler’s Second Symphony that everything changed. Overnight, I decided ‘I need to know more about classical music. And I want to do that.’”

“I didn't know that music could be that loud and powerful and intense. I wanted to become a conductor.”

Developing Discipline and Craft
After being advised to master a single instrument, Rais-Sherman majored in cello studies at Ithaca College. His time spent with the cello impacted his approach to conducting.

“I think it's really important that you develop the discipline and craft of learning an actual instrument and playing in an orchestra… something that helps develop your empathy and understanding of the people with whom you'll be working.”

Soon Rais-Sherman was off to the University of Michigan to study orchestral conducting. His journey as a conductor had officially begun.

Working With Young Musicians
When Rais-Sherman began working in his field, he quickly discovered a passion for instructing young people. He was tapped to serve as assistant conductor for the New York Youth Symphony, coaching the city’s most talented young musicians. He also worked as an early childhood music educator and taught children aged one through six.

“It's by far the hardest job I've ever had,” Rais-Sherman laughs. “It requires maximum focus, attention, energy, and imagination at all times. To preserve the attention of 10 four-year-olds, for 45 minutes—there's nothing harder than that!”

Over time, Rais-Sherman began exploring new ways to share music with the next generation. The conductor, who also moonlights as a computer programmer, turned his attention to the online platform Twitch. He currently runs a channel @OrchestraObsessed, where he shares videos commenting on everything from conductors’ fashion choices to video game soundtracks. Rais-Sherman was fascinated by the potential of introducing orchestral music to a live online audience, and hopes his work will help make classical music more accessible.

“My goal with this stream is to offer a place where someone who's never heard an orchestra before can stumble upon my stream, understand what's going on, and feel welcomed,” he says. “What is the point of our art form, if it isn't to pass it on to the younger generation?”

Music as a Force for Community
Making music available to everyone has always been important to Rais-Sherman. When asked how he defines the gift of music, Rais-Sherman says he sees it in terms of the community.

Conducting the World Youth Symphony Orchestra
He has high hopes for his time at Interlochen Arts Camp.

“This is the first of six weeks of orchestra with a bunch of incredible conductors,” he says. “I want them [the students] to leave this week feeling comfortable and confident to play with a lot of guts and energy in rehearsals. I find sometimes with a group this age that everyone's really good, but they're a little bit timid about being in an orchestra rehearsal. My emphasis has been: bring an attitude, bring a point of view! Do not be afraid to make mistakes. We are all friends here.”

He looks forward to conducting Berlioz’s Symphonie Fantastique with the World Youth Symphony Orchestra for several reasons. Chief among them is the fact that Berlioz was an astoundingly innovative composer.

“He [Berlioz] was able to look into an abyss of musical expression, and come up with something that no one else came up with, even remotely,” Rais-Sherman explains.

When Berlioz penned the symphony, the composer was just 25, enduring a crisis in his career and personal life.

“He’s desperately trying to make his mark as a musician and is rebelling against a very academic musical establishment,” Rais-Sherman notes. “On top of all this, he's falling hopelessly in love with someone who doesn't even know he exists.”

A lot of the fun, Rais-Sherman says, comes in following the “young musician” in the symphony’s imaginative storyline, which is presumably about Berlioz himself. Over the course of five movements, the musician moves through a variety of scenes including an encounter with his beloved, an elegant ball, a pastoral idyll, an opium-fueled dream, and a witches’ dance at his own funeral. Throughout, Berlioz expresses his feelings with great passion.

Rais-Sherman hopes the audience walks away from the performance knowing that “anything is possible.” He wants young musicians to glean similar wisdom.

“Be open to the possibilities of your life. And understand that you can go down a certain path for 10 years and completely switch. There's plenty of time for a lot of things in life,” Rais-Sherman says.

Coming from a man whose career has encompassed music, education, and technology, these words ring true.