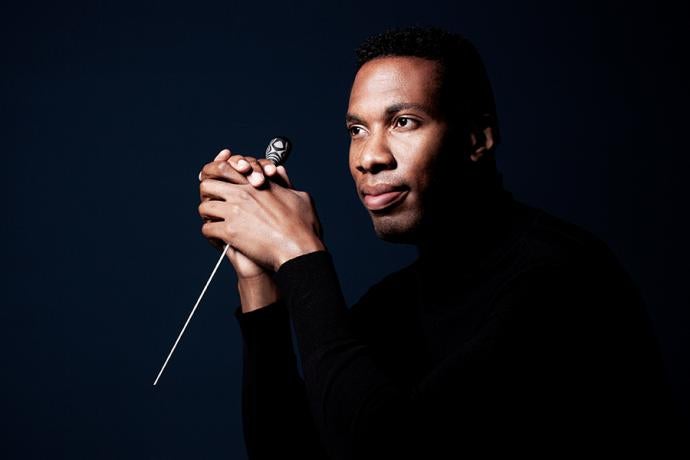 When Roderick Cox walked under the stately pines as a young counselor at Interlochen Arts Camp, he little imagined that he’d be back one day in an entirely different role.

Fifteen years later, Cox has returned to Interlochen—this time to wield the baton in Kresge Auditorium as conductor of the World Youth Symphony Orchestra. It’s the latest development in a musical journey that’s taken him from southern gospel choirs to a thriving conducting career based out of Berlin, Germany.

Growing Up Gospel
Cox grew up in Macon, Georgia. His first music-related memories come from the Seventh Day Adventist church he attended, where his mother sang in the choir.

“I spent a lot of time sitting in my mom's choir rehearsals and listening to her sing,” Cox remembers.

When they were old enough, Cox and his brother both joined the choir. Many gospel-singing churches were just beginning to incorporate more modern instruments in the mid-90s. Cox’s church was very conservative, and these innovations caused a stir.

“I remember there were a lot of skeptics when the drum set and keyboard were was brought into the church,” says Cox. “When people were having too much fun in music class, this was seen as something not sacred, but more secular… I still remember those things, and music evolving not only in my life, but also the lives of people around me in the church.”

Cox also played percussion, and then French horn, in his school’s band from elementary school through high school.

“I was lucky to be a part of a healthy and vibrant music education program,” Cox says.

When the time for college came around, Cox found himself in financial need and unable to purchase an instrument. At this point, the Otis Redding Foundation—established in honor of the iconic soul singer—stepped in to help. Redding’s widow, Zelma, arranged for Cox to receive a French horn for college.

The impact of this gift was not lost on young Cox, who would go on to establish a charitable foundation of his own.

“This was the impetus for establishing my own initiative, The Roderick Cox Music Initiative, in 2019,” says Cox. “I wanted to pay that back to other young people who aspire to become musicians or pursue classical music at that level.”

His initiative provides scholarships for young musicians of color from underrepresented communities.

“I firmly believe that one of the problems with bringing more people to the table with classical music is the matter of access,” he says, noting that instruction often becomes more costly as the musician’s skill grows. “It's helpful to have angels in your life, and I think it takes a village of people to help put one amazing player on the stage of a professional orchestra.”

Years later, Cox remains grateful for the “angels” in his life who helped him succeed.

A College Crisis Leads to a Career Shift
After high school, Cox attended the Schwob School of Music at Columbus State University. The young musician quickly drew accolades; as a freshman, he successfully auditioned for both the school’s top-performing band and semi-professional orchestra.

On the heels of these accomplishments, an unexpected crisis arose. Cox was suddenly and inexplicably unable to play the French horn. His muscle memory was gone.

Though Cox was eventually able to return to a high enough level of play so he could graduate, the experience left him shaken. He decided to learn other ways to express himself musically.

Cox attended graduate school at Northwestern University. There, he pursued a degree in conducting under the mentorship of Victor Yampolsky and Mallory Thompson. Between the two of them, they “planted the seed” that inspired Cox to become a professional conductor.

Just one year after finishing grad school, Cox found a position with the Alabama Symphony. A college crisis had led him to a new life path. His conducting career had officially begun.

Return to Interlochen
After working as an associate conductor with the Minnesota Orchestra, Cox signed with his own management. Cox makes his home in Berlin, Germany—a city rich with cultural opportunities. He enjoys the freedom to travel and perform around the world.

It’s been well over a decade now since Cox worked as a camp counselor at Interlochen, but he’s looking forward to returning to the Land of the Stately Pines.

On Sunday, July 17, the World Youth Symphony Orchestra will perform under his baton. Repertoire will include Joan Tower’s “Fanfare for the Uncommon Woman” and Dmitri Shostakovich’s Symphony No. 5 in D Minor, Op. 47.

Cox looks forward to coaching the students at Interlochen. Though relatively young for a conductor, he’s gathered considerable wisdom along his journey so far. When he offers advice to budding musicians, his words carry the weight of experience.

“Think not only about how music can serve you and serve your life, but how you may spend your life serving the music,” he says. “Keep in contact with your love, your desire, and your passions in this art form, because those are the things that will help you endure through the many, many rejections you may receive—many of the hard times that may come as an artist in any profession.”

For Cox, the challenges he has faced—whether finding a first instrument or enduring a college crisis—have led him to where he stands today as a philanthropist, conductor, and educator. And his story is just beginning.

“The fact is that a life in music is a long one,” he says. “It's a journey, and not necessarily a destination. And if you think of music in that way, it can be a lifelong fulfillment and enjoyment as well.”

On Sunday, July 17, at 7:30 p.m., the World Youth Symphony Orchestra will perform with conductor Roderick Cox. Tickets are available here.