The new position is the latest of many investments Interlochen has made over the past several years to promote safety on its 1,200-acre campus. 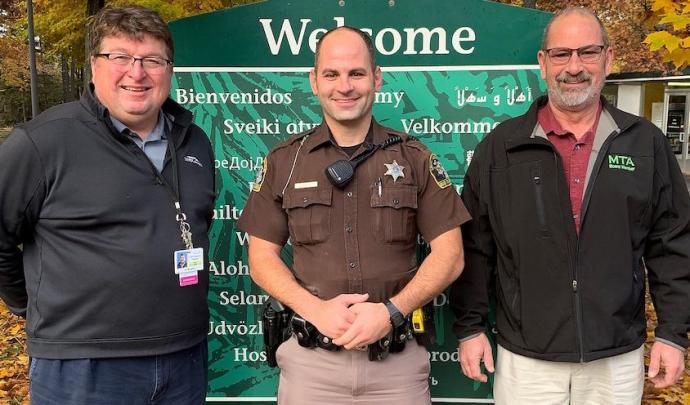 The new position is the latest of many investments Interlochen has made over the past several years to promote safety on its 1,200-acre campus.

In his new role as Green Lake Township CPO, Mark Noffke, an 11-year Grand Traverse County Deputy, spends approximately 40 hours a week patrolling the area, going where he is needed and getting to know the safety concerns of local residents and businesses. Noffke has served on the Northern Michigan Mutual Aid Emergency Response Team for over five years and is also a member of the Grand Traverse Honor Guard. This fall he will collaborate with Joseph McCarthy, Director of Campus Safety at Interlochen, to lead upcoming trainings for local law enforcement officers on the Interlochen campus.

Interlochen’s Board of Trustees advocated for the creation of the position to promote safety on campus and mitigate risk. “We regularly evaluate the security and safety needs of our campus,” said Andrew Cordonnier, chair of the board’s Audit and Risk Committee. “Mark’s presence in our community means that people at Interlochen and in the township will be familiar with him and feel comfortable contacting him should any issues arise.”

Interlochen and Green Lake Township are splitting the annual cost of the position. The Grand Traverse Sheriff’s Office covers other costs including training and equipment. “We are tremendously grateful to Interlochen for enabling us to add a township CPO at half the normal cost,” said Township Supervisor Marvin Radtke, Jr.

The new position is one of several recent investments Interlochen has made to promote safety on campus. Over the past five years, Interlochen’s campus safety team has grown more than 35%. In addition to upgrading the emergency speaker and siren system and installing automated external defibrillators and more than 130 security cameras across campus, the nonprofit has hosted trainings on campus with firefighters from the Green Lake Township Fire Department.

In recent years Interlochen has sought ways to strengthen its ties with the Grand Traverse region. “As the largest entity in Green Lake Township, we strive to be good neighbors,” said Kessel. “This partnership is a great opportunity to work together.”

A Kingsley resident who previously lived in Green Lake Township for a decade, Noffke says he has “always been a fan of Interlochen and looks forward to becoming a familiar face on campus.” His first day as CPO was Sept. 30.