Guitarist Daniela Santiago Martinez received From the Top’s Jack Kent Cooke Young Artist Award and will be featured on the nationally syndicated NPR program during the week of March 29 and in a virtual concert on April 7. 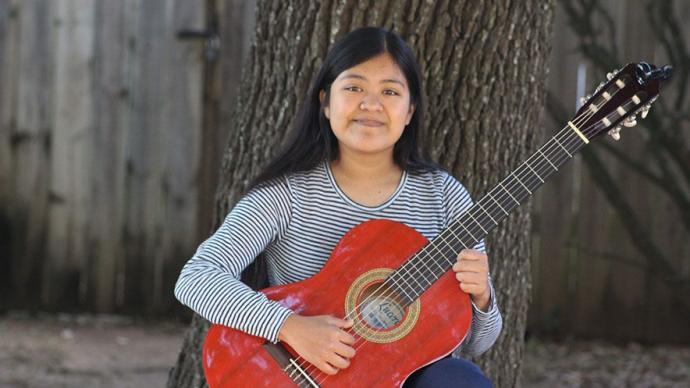 Interlochen Arts Academy senior Daniela Santiago Martinez will be featured on the nationally syndicated NPR program From the Top during the week of March 29.

A second-year student at the Arts Academy from Del Valle, Texas, Martinez studies guitar with Matthew Cochran. She will be featured on From the Top’s podcast during the week of March 29, 2021. Martinez will be interviewed by host Peter Dugan and perform La Rose, Op. 46 No. 9, by Mauro Giuliani (1781-1929) and “Sereno y Lolo Felix” by Porte Diferente and Arsenal Efectivo, arr. Martinez. (Her episode can be streamed on From the Top’s website beginning March 29.) Additionally, Martinez will be featured in an upcoming From the Top virtual concert celebrating three young musicians and their musical roots on April 7 at 8 p.m. ET.

Along with fellow Academy students Maximus Gurath and Elizabeth Perez-Hickman, Martinez is a 2021 recipient of From the Top’s Jack Kent Cooke Young Artist Award. In addition to performing on From the Top, recipients of the award receive up to $10,000 to help offset the costs of studying classical music at a high level. Each year, From the Top chooses approximately 20 exceptional pre-collegiate musicians ages 8-18 to receive the award. Gurath appeared on From the Top last fall and Perez-Hickman will be featured in a future episode.