A recipient of the Jack Kent Cooke Young Artist Award, trumpeter Lydia Hanje is featured on the nationally syndicated NPR program the week of March 7. 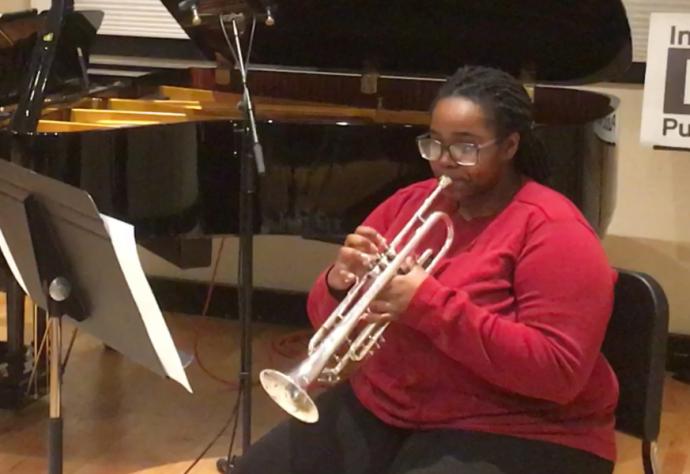 Interlochen Arts Academy senior Lydia Hanje will be featured on the nationally syndicated NPR program From the Top during the week of March 7.

America’s largest national platform celebrating the stories, talents, and character of young classically-trained musicians, From the Top features performances by young artists as well as conversations with them about musical pursuits and day-in-the-life musings. Since the show’s inception in 2000, more than 300 students from Interlochen Arts Academy and Interlochen Arts Camp have been featured.

In the latest episode of From the Top’s podcast, Hanje performs “Oliver’s Birthday” by Bruce Broughton, accompanied by pianist Ya-Ju Chuang. A student of Ken Larson at Interlochen, the 17-year-old from Vestavia Hills, Alabama began her orchestra experience as a member of the Alabama Symphony Youth Orchestra. She went on to attend Interlochen Arts Camp, where she performed in the World Youth Wind Symphony and Wind Ensemble. In 2021 she was a member of Carnegie Hall’s prestigious National Youth Orchestra.

Hanje is also a recipient of From the Top’s Jack Kent Cooke Young Artist Award. In addition to performing on From the Top, recipients of the award receive up to $10,000 to help offset the costs of studying classical music at a high level. Each year, From the Top chooses approximately 20 exceptional pre-collegiate musicians ages 8-18 to receive the award.