Working to move the needle

Interlochen continues commitment to increasing diversity, equity, and inclusion among its students, faculty, staff, and trustees. 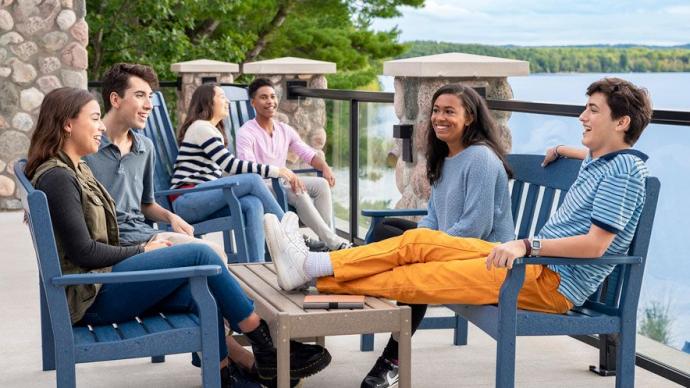 In August 2019, Carlos Abril and Kenneth Elpus published a study in the Journal of Research in Music Education that reiterates what many artists, arts educators, and arts administrators already know to be true: African-American and Latino students are significantly underrepresented in high school instrumental programs across the U.S.

Indeed, diversity—or the lack thereof—has become an important topic in all artistic mediums. From Hollywood, where actors boycotted the 2016 Oscar Awards due to the lack of racial diversity among nominees, to the nation’s major orchestras, who are actively seeking program works by female composers, the message is clear: Representation matters, not including in the arts, but especially in the arts.

Interlochen, too, has long recognized the lack of representation among its students, faculty, staff, and Board of Trustees. As Interlochen approaches its second century, we are more committed than ever to becoming a diverse, equitable, and inclusive community.

In 2007, President Jeffrey Kimpton and the Board of Trustees authorized the institution’s first formal Task Force on Diversity. Chaired by trustee Hon. Kurtis T. Wilder, the Task Force spent a year studying diversity in arts education, both at Interlochen and beyond.

Upon conclusion of their study, Wilder’s Task Force set forth a series of recommendations for increasing diversity at all levels of the organization. To carry out these recommendations, the Board commissioned an ad hoc committee to a three-year term.

The committee’s work yielded remarkable results. Over the three-year term, the Academy increased domestic students of color from 8.5% to 20.2%, with Camp students of color increasing from 10.2% to 18%. Faculty and staff diversity doubled, with Academy employees of color increasing from 2% to 4% and Camp from 4% to 10%. Among the committee’s other notable contributions was the adoption of a Diversity Statement designed to highlight the institution’s commitment to diversity in its community at large.

But while the Task Force’s results were impressive, Interlochen’s students, faculty, administrators, and friends continued to recognize a need for improvement. When Trey Devey assumed the presidency of Interlochen in June 2017, increasing student and staff diversity was one of his first priorities. Following Devey’s lead, the Board of Trustees established the Diversity, Equity, and Inclusion Task Force (DEITF) to continue the work of the 2007 task force.

“The remarkable thing about the first task force was that it was very effective and really moved the needle on creating a more diverse student population, but only did a little bit to improve faculty and staff diversity,” said Barrett J. Rollins, Interlochen Trustee and chair of the Diversity, Equity, and Inclusion Task Force. “What we did was build on what the first task force did. We were not starting from a standstill; there was already measurable progress.”

More than a mix of races

For the DEITF, diversity was more than checking demographic boxes; it was about creating a vibrant and meaningful educational community for all Camp and Academy students.

It’s important to clarify, says Assistant Director of Talent Acquisition Aretina Hamilton, that diversity goes beyond skin color. “We often think of diversity in terms of racial mix, but it’s also about diverse ideas, genders, ethnicities, and beliefs,” she said.

Diversity of ideas lies at the heart of Provost Camille Colatosti’s vision for the Arts Camp and Arts Academy experience of the future. “We live in a diverse world, and it is our duty as an educational institution to prepare our students to live in this world,” she said.

As Chief Science Officer at Harvard Medical School, Rollins brings a unique perspective to his role as the task force chair: He served on a similar task force, which focused on the lack of diversity among faculty, at Harvard. As a result, Rollins became a firm believer in the importance of representation in leadership.

“Faculty, in my opinion, is key to recruiting and retaining a diverse student body,” he said. “Students need to feel welcome and included at Interlochen. It’s hard to do that if you don’t see anyone you can relate to or who looks like you.”

Under Rollins’ leadership, members of the DEITF researched best practices in diversity hiring at the secondary education, college, and corporate level. Several members met with representatives from pharmaceutical company Eli Lilly; others met with leaders from comparable schools. The chief diversity officer of Amherst College addressed Interlochen’s full Board of Trustees. The DEITF also reviewed demographic data from comparable institutions, the greater Grand Traverse area, and the nation at large.

“It was truly a data-driven exercise,” Rollins said. “Everyone involved was truly hungry for data so that we could see where we’ve been, our current state, and where we’re going. Based on concrete data, we were able to create recommendations that would be realistic and measurable.”

The primary recommendation was to bring Interlochen’s faculty and staff diversity into alignment with U.S. demographics. In the short term, the DEITF challenged the human resources team to increase the proportion of employees from underrepresented communities by 2.5% over the next five years—a goal which was achieved in 2019 with the addition of seven new faculty and staff members of color.

This success can, in part, be attributed Hamilton’s efforts in diversifying applicant pools. Since arriving at Interlochen in 2018, Hamilton has been investigating partnerships with other organizations, including historically black colleges and universities. “Interlochen is a great place for which many people would love to work,” she said. “We just have to know where the right candidates are located and how to help people find out about us.”

But, says Hamilton, recruitment is only part of the equation. As a person of color herself, Hamilton understands that the barriers inherent in relocating to a less diverse area lead to retention difficulties. “When I moved here from Atlanta, it was a culture shock,” she said. “We can’t ignore the fact that northern Michigan is not diverse at all. As a result, it’s important to cultivate a space where new recruits feel welcome and included and want to stay. I saw the possibilities for creating change here by creating spaces like workshops, events, support groups, and networks.”

Hamilton conducts regular check-ins with new employees to ensure that they feel supported and connected. “We know that, culturally, people of color can feel somewhat isolated,” she said. “I want to make sure our new hires know that they are a part of our community.”

For students, faculty and staff of color are not only a sign of welcome; they’re role models. “Our students need to see the pathway to go from being a talented student to becoming a performer or faculty member,” Rollins said. “Unless we have a diverse faculty, it’s hard for students to see themselves in those roles.”

True to our mission

While employee diversity is key to student recruitment, student diversity is the most important focus of Interlochen’s diversity efforts.

“Given that this country will soon be a majority non-white country, there is a huge pool of talent that we as an arts organization ought to be attracting,” Rollins said. “If we don’t make efforts to attract that talent at the faculty level, we’re not going to be able to attract the best students. And if we’re not teaching the best students, we will not be true to our mission.”

The Task Force recommended a 5% increase in the proportion of Arts Camp and Arts Academy students from underrepresented communities over the next five years. This goal represents an attainable step towards an aspirational future.

Many of those partnerships are already underway. In 2017, Devey led the development of relationships with organizations such as the Miami Music Project, Riverdale Children’s Theatre, and Youth Orchestra Los Angeles, which brought dozens of students from underrepresented communities to Interlochen Arts Camp and Arts Academy. These partnerships, which were supported by opportunity scholarships funded by leadership donors and thousands of Create Amazing Opportunities contributors, resulted in a 20% increase in domestic diversity from 2017 to 2018. The momentum continued into 2019 with the addition of several new partnerships.

In the coming years, the Admission team will bolster the groundwork laid by these successful partnerships by increasing their presence at educator conferences, youth art competitions, and strategically selected cities. Increasing available merit and need-based scholarship funds is also a critical component to ensuring that Interlochen is accessible to all mission-appropriate students.

A safe and supportive environment

Inclusive and equitable practices begin long before a member of an underrepresented community arrives on campus. “Our physical plant has been working to create access where there needs to be access,” Colatosti said. “We’ve renovated our bathrooms so that everyone is able to use the facility that feels most appropriate for them to use. We’ve also reconfigured our residence halls to represent the complexity of gender today.”

Interlochen Arts Academy now offers residence halls that are all-female, all-male, and non-binary. Each Academy student is able to indicate their housing preference before their arrival on campus.

“The goal is to ensure that everyone has a space where they feel comfortable,” Colatosti said.

Another important step towards inclusion is understanding, which Interlochen is fostering through education. Each year, Interlochen’s faculty and staff engage in a number of mandatory training sessions with experts in the fields of diversity and inclusion. Residence life staff, in particular, receive extensive training in inclusion to help them create supportive and equitable communities in their assigned halls.

Hamilton, too, is leading discussions within the Interlochen Arts Academy student community, particularly in the area of race. She’s currently teaching two sections of Race, Space, and Place, an American history course that views our nation’s trajectory through a critical race lens.

Diverse at the top

Ultimately, the DEITF says, the onus of changing the conversation about diversity, equity, and inclusion at Interlochen lies at the top: With Interlochen’s Board of Trustees and administrative team.

Although the work of task force is officially finished, the group recommended the formation of a standing Committee on Diversity, Equity, and Inclusion comprised of both trustees and key staff members. Further, the DEITF recommended implicit bias training for all governing trustees.

Ultimately, Interlochen’s refocused commitment to diversity comes not from ideological aspiration or financial motivation, but from a desire to nurture, create and share art that represents our nation and time.

“The best art comes from diverse environments, diverse artforms, and diverse identities,” Colatosti said. “Having those multifaceted perspectives as makers and receivers of art helps us to make the best possible art: Art that represents and helps us understand the world in which we live.” 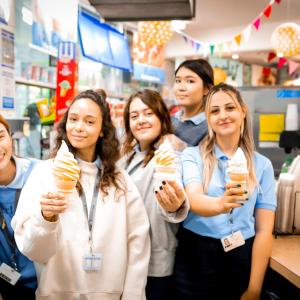 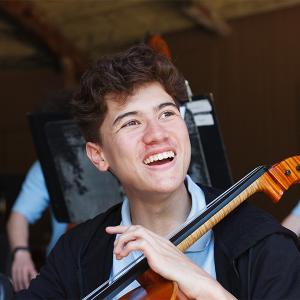