After his grandfather built a cabin in Michigan, Ted Beiderwieden started summering near Interlochen and would listen to Interlochen Public Radio. He went from avid IPR listener to Interlochen Center for the Arts' Volunteer of the Year several years in a row. 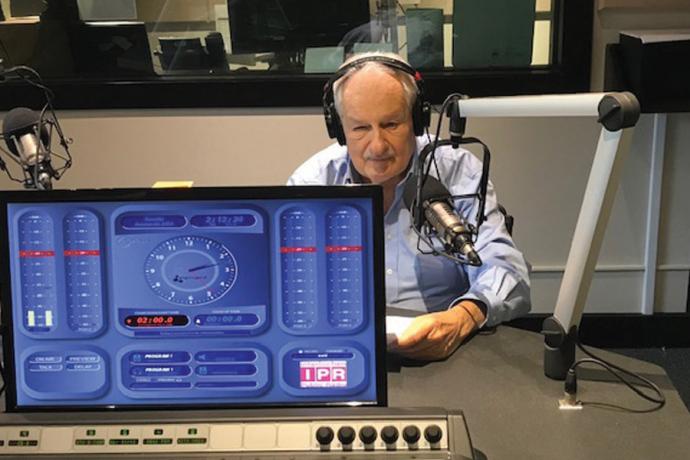 Hundreds of Interlochen volunteers donate thousands of hours of their time and expertise every year. They work all over campus as ushers, gardeners, tour guides, and more. Ted Beiderwieden began volunteering at Interlochen in 1993. In 2017, 2018 and 2019, Interlochen Center for the Arts named him “Volunteer of the Year” for his extensive contributions to Interlochen Public Radio where he volunteered over 900 hours during the 2018-2019 year.

Before he retired, Ted worked for 30 years for the American Lung Association, and then as the pastor at his church in Arcadia, MI. Now, he’s a nearly full-time volunteer. We spoke with Ted to learn more about his experience, his dedication, and why volunteering at Interlochen is so special.

How did you learn about Interlochen?

My grandfather built the family summer cottage in Arcadia, MI in 1926, but I grew up in New Jersey, four miles west of the George Washington bridge. My mother once took my fourth grade class to Carnegie Hall for an afternoon performance of the Tchaikovsky piano concerto. I became enamoured with classical music, and have been all my life. We always attended Interlochen summer concerts while staying at the family cottage.

What sort of work have you done for Interlochen?

I started volunteering because I listened to Interlochen Public Radio (IPR) when we were in Arcadia. They were calling for volunteers to staff the phones for fundraising, so that’s how I got started in 1993. When I retired, I had a message from the Dennison Center asking for volunteers, and I thought, “That’s something I can do!” Then I heard the call for people to drive shuttles for the Sunday evening summer concerts. It is easy to spend many days a week at Interlochen.

What do you most enjoy about your work with Interlochen?

It’s a reason to get up in the morning! I’ve been working from 11 a.m. to 5 p.m., and I’ve been doing it every day they’ll let me. IPR’s Music Director, Amanda Sewell, told me that she thinks I know more about classical music than many staff members! My job at the studio has been to completely revamp and upgrade the CD records in the CD library. I’ve been at this since January of 2017, and so far I have processed 12,000 discs to make sure that all the disc information is in the correct place in the computer.

What are some of your favorite Interlochen memories?

The fact that I’m so involved in the station. Before the pandemic, I was also hosting a weekly program called “Treasures Uncovered.” This aired never-before aired discs I recovered while doing data entry. So I researched the background of the piece and created a narrative. I was making each disc’s debut! I did it for over a year until the pandemic interrupted.

What sort of music do you enjoy?

My favorite is Baroque, especially the music of Johann Sebastian Bach. Nowadays I’m a former piano player who loved to play Mozart. I also love Rachmaninoff and Tchaikovsky. The other day I was in the studio and uncovered a Russian piano concerto I’d never heard before. I listened to it while I worked, which is a terrific way to work.

Why do you think volunteering is important?

You don’t retire from something. You retire to something. I moved from Arcadia to Traverse City with the idea that I would become involved in Interlochen.

Is there anything within your position that you’re looking forward to?

Getting back to doing what I did before the pandemic! Putting together my weekly program. I enjoyed that immensely.

What would you tell someone who’s interested in volunteering?

Well, you must have a heart for what Interlochen does. It teaches young people to appreciate the arts and perhaps develop an arts career. In my case, I was drawn to music. For others it’s dance or drama. If something is particularly appealing, you can find a niche at Interlochen. All you have to do is contact the right people.

It’s given me something to look forward to, and something to thoroughly enjoy in my––I hate to say later years, but that’s what it is! My kids cheer me on!

Volunteering at Interlochen provides a mutually enriching experience for our volunteers and other Interlochen community members. If you are interested in learning more about on-campus volunteer opportunities, please contact Jennifer Richards at jennifer.richards@interlochen.org.