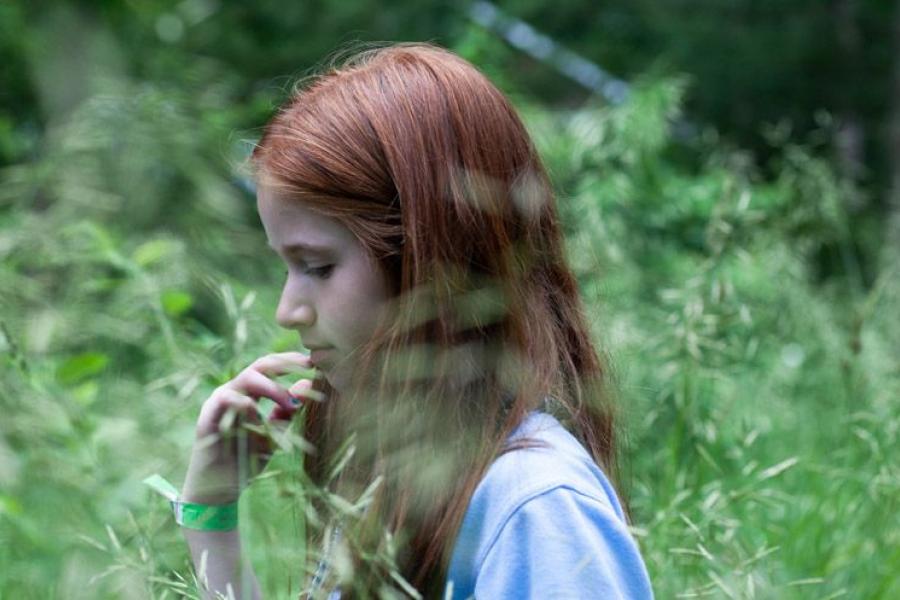 Junior camper Caris Kojima walks to the bee hives near the R. B. Annis Botanical Lab during a class on July 2. Agricultural sciences instructor Emily Umbarger taught the class on pollinators as a cabin night activity. 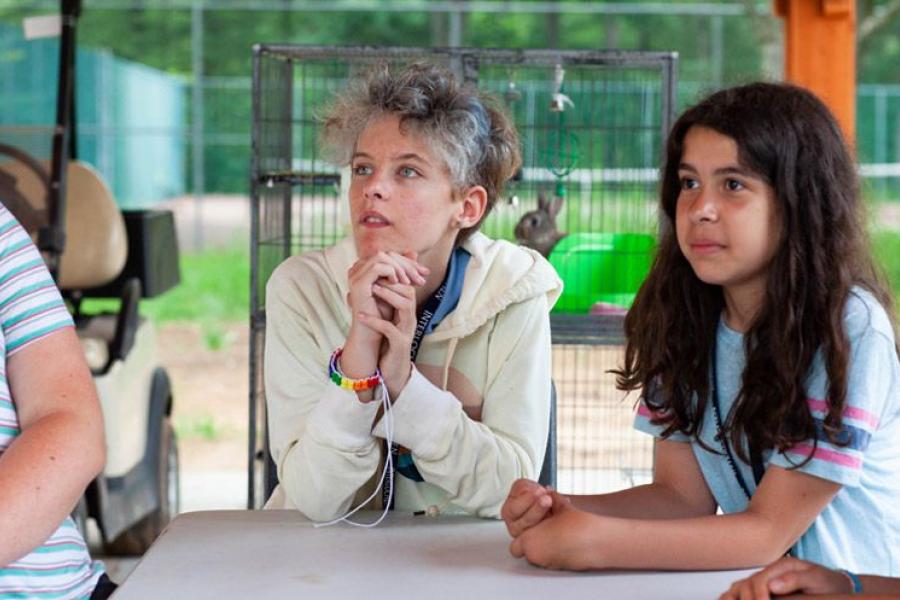 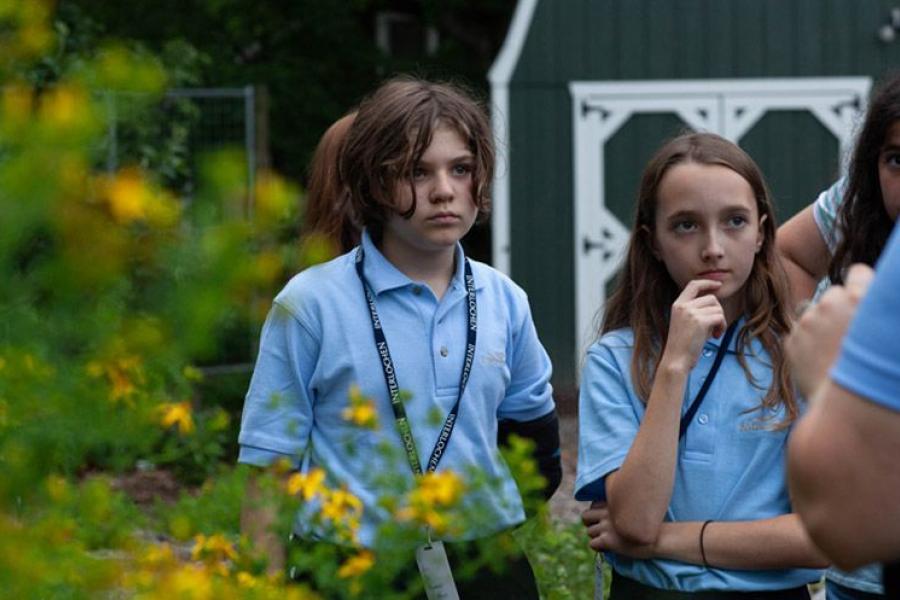 Junior campers Ash Hundley (left) and Zoe Lelevich participate in an activity to identify pollinator plants in the R. B. Annis Botanical Lab. The lab features a pollinator garden to attract bees, butterflies, and other pollinators. 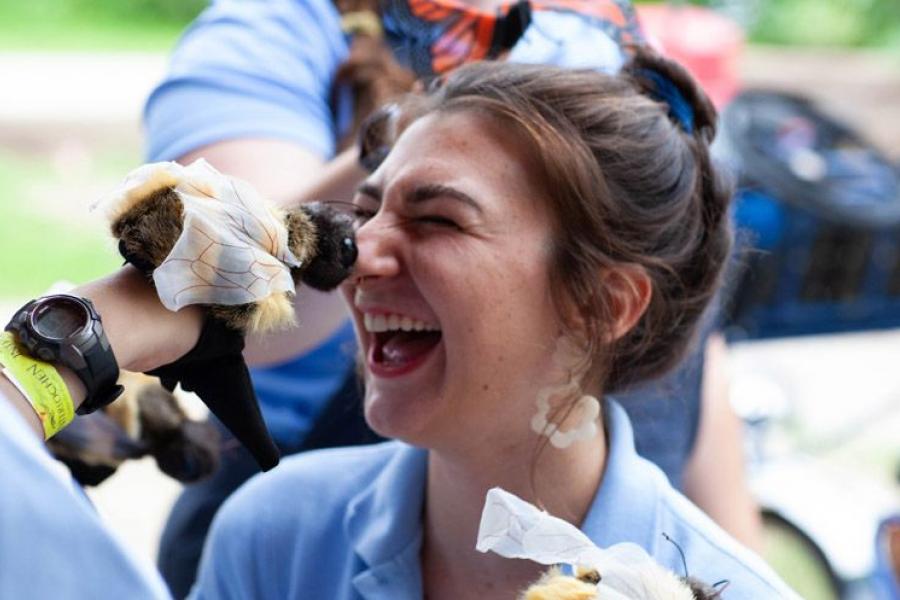 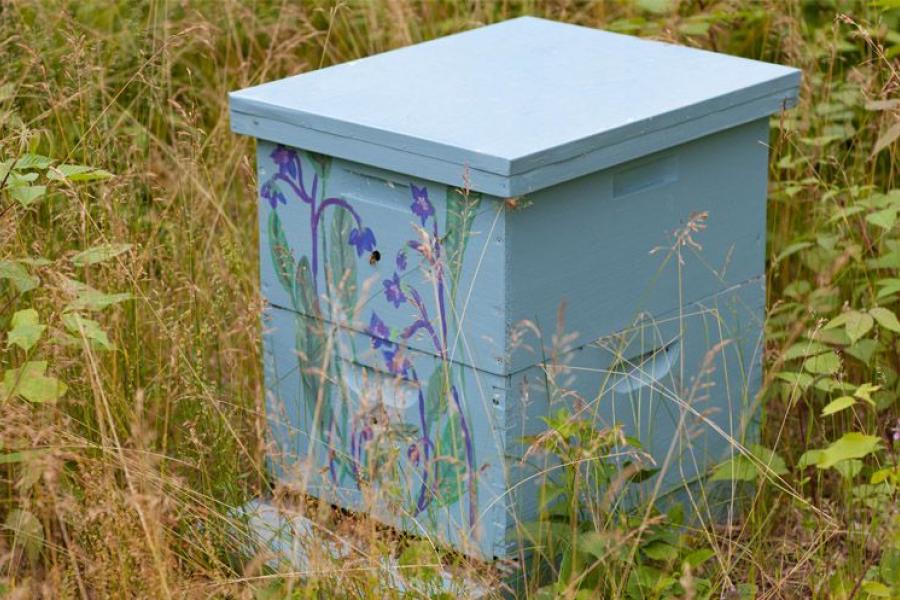 One of four beehives owned and operated by Interlochen Center for the Arts sits in the lab’s educational apiary. Students in the Academy’s agricultural sciences class helped start the hives in spring 2019. 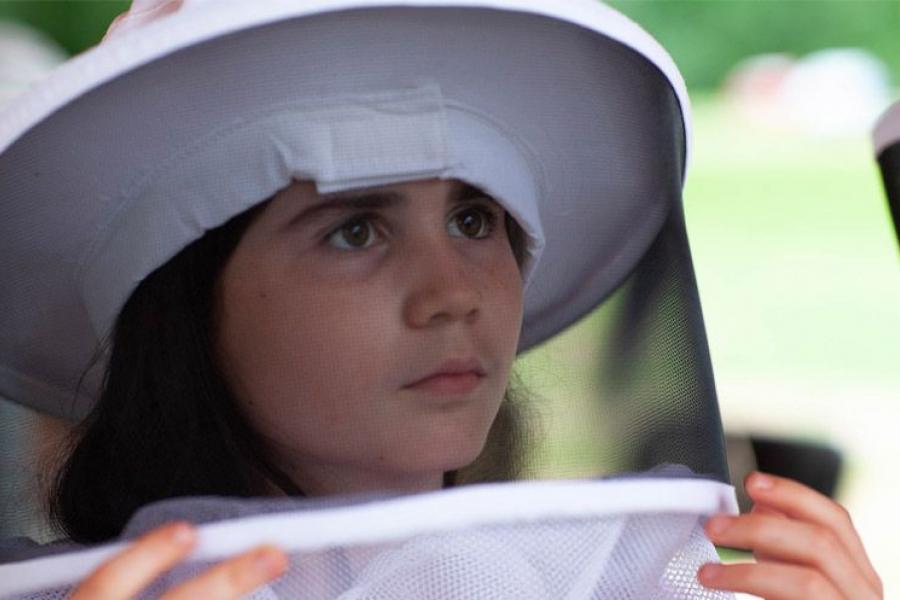 Junior Cara Murtagh tries on a beekeeping hat and veil. The class consisted of interactive activities about bees and other pollinators. 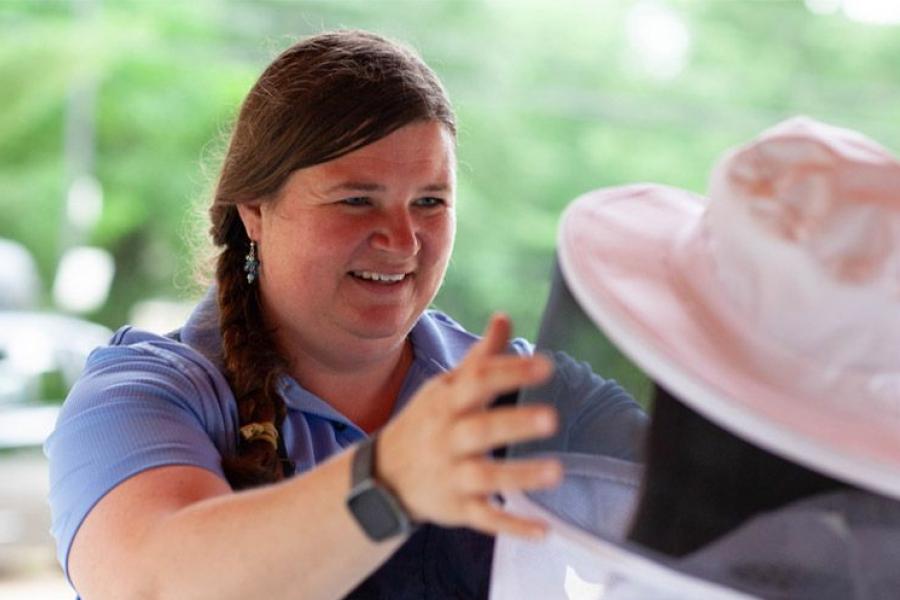 Umbarger helps a junior camper wear a beekeeping hat and veil after her class. Umbarger has kept bees for eight years. 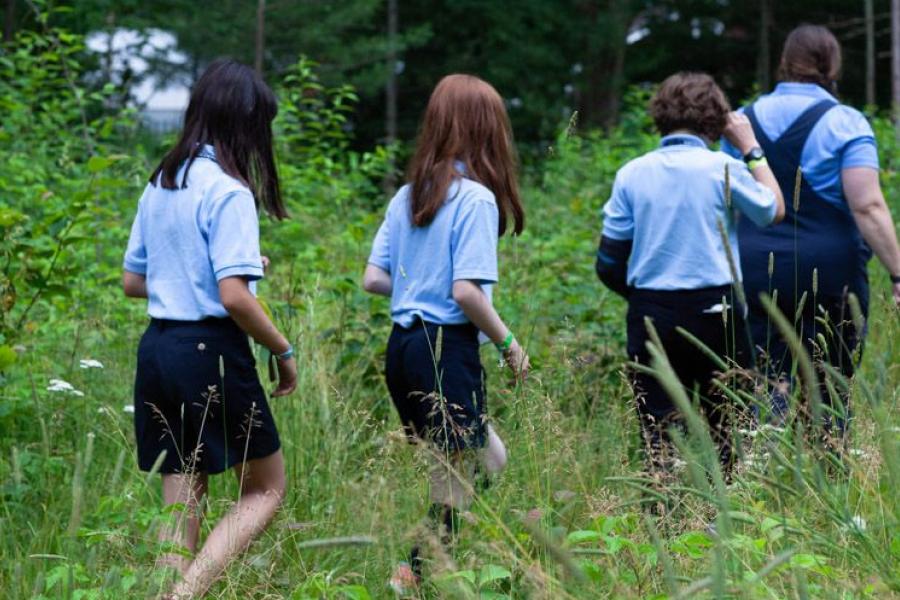 Umbarger (right) leads junior campers to the lab’s educational apiary. The apiary, which is a collection of four beehives, was built in spring 2019.

It was a warm, breezy evening at Interlochen Center for the Arts’ R.B. Annis Botanical Lab and the eight campers of Junior Girls Cabin 7 were learning about pollinators.

“How do bees communicate?” instructor Emily Umbarger asked. She paused to allow their curiosity to pique, then revealed the answer: “They dance.”

“They dance?!” someone called out.

Under the lab’s newly built wooden shelter, eight sets of eyes widened. Umbarger called up three volunteers to demonstrate. Together, they bobbed and danced their bee finger puppets as the lab’s chickens clucked nearby in their coop.

This class on pollinators marked the beginning of the Botanical Lab’s collaboration with Interlochen Arts Camp after a year of use by Interlochen Arts Academy. This class was the first of at least four others that will take place during Camp this summer. Umbarger helped organize the series along with Kathleen Regovith, the Cabin Night Manager, and the program directors of the junior divisions.

“No one else has ever done this in the history of Interlochen,” Umbarger said at the start of the class.

Until recently, the resources haven’t been in place. Three years ago, the land the lab occupies was an empty field. Just two months ago, the pavilion the class stood under did not exist. Now, the lab features a solar-powered greenhouse, hoop house, aquaponics system, nine raised garden beds, a newly planted orchard, and a chicken coop. Nearby, there are four beehives and a composting facility, which began operation in June after two and a half years of research and planning.

Umbarger is currently transitioning out of her role as an academic counselor into her new role as sustainability manager—a title made just for her. Last year, she taught the Academy’s first agricultural science class. She’s also an organic farmer, a beekeeper of eight years (even though she’s allergic to honey bees), but none of these compare to her greatest roll.

“I'm a mother first and foremost,” Umbarger said. “I feel like I have to answer to my children in some way to promise them a future that will be there for not only their generation but, as the Native Americans say, for seven generations ahead.”

Her students of all ages understand this urgency too.

“The decrease of population in bees is just rocketing,” said Ash Hundley, a student in the class. “It does not wait for you. Learning about it is very good, so you can help slow it down.”

Another student, Caris Kojima, said her favorite part of the class was getting to see the four beehives near the Botanical Lab.

The hives were designed and built by Umbarger and her Academy agricultural science class last year. Conor Dailey (IAC 15, 18, IAA 15-19) was a student in the class who helped start the hives. As a recent graduate, Dailey said he’s looking forward to seeing how the legacy of sustainability he helped start grows over time.

After the pollinator class ended, the campers of Cabin 7 hung around to try on beekeeping gear, ask Umbarger questions, and thank her for the class. As the students took turns holding Cheryl, Umbarger’s fluffy angora rabbit, Hundley said it’s important for young people to learn about sustainability.

“We’re Generation Z,” Hundley said. “As children, we need to carry on the human population and not let it end like the alphabet.”