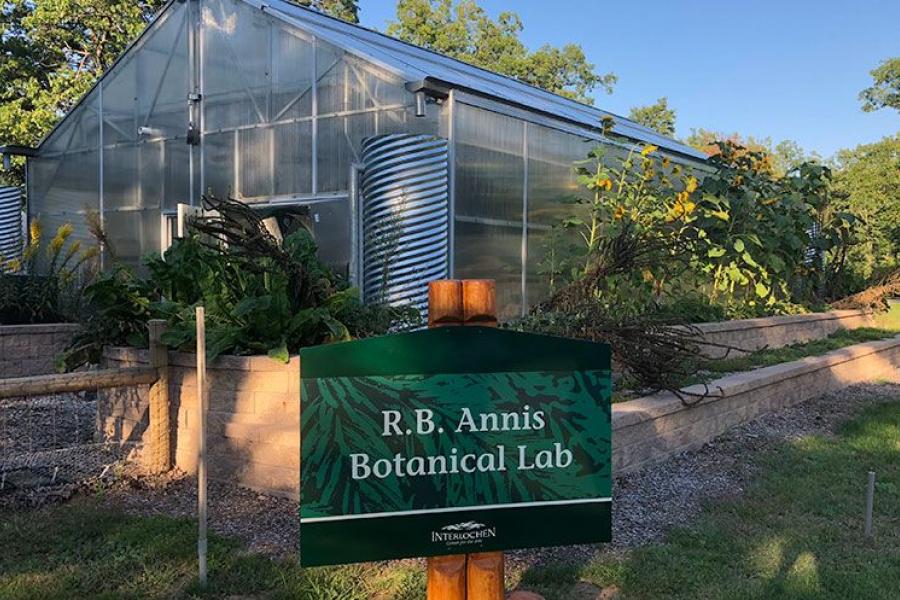 Students harvest radishes from one of the raised beds. 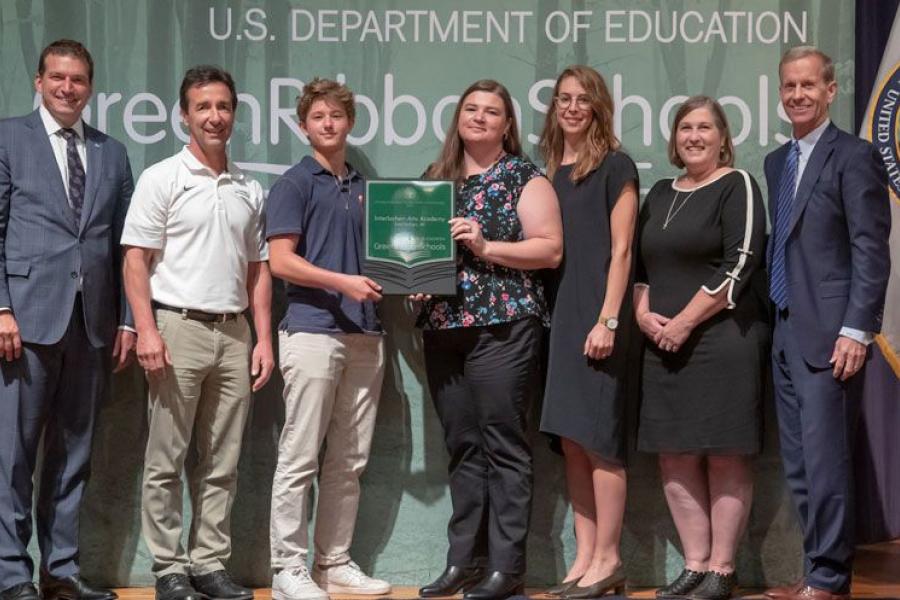 In 1927, Joe Maddy selected a stand of virgin pines between two pristine lakes as the perfect setting for his great experiment. Nine decades later, those lakes and pines are still a central component of the Interlochen experience for thousands of Arts Camp and Arts Academy students, patrons, and guests.

As the world and its climate began to change, Interlochen Center for the Arts recognized the urgent need to protect its natural resources. In 2016, the Board of Trustees pledged to “create an environmentally friendly and sustainable campus” at Interlochen. This Earth Day, we look back at our journey of sustainability, celebrating our successes and looking forward to the exciting developments yet to come.

Planting the seeds of sustainability

When the Board made its 2016 sustainability resolution, Interlochen was struggling to encourage a campus-wide, recycling-first mindset. Vice President of Operations Pat Kessel was tasked with creating and implementing a new direction for the organization.

One component of Kessel’s plan for a greener Interlochen was the creation of a school garden. In July 2016, Kessel reached out to Emily Umbarger—one of the Academy’s academic and college counselors—and asked her to start Interlochen’s garden. Umbarger, an organic homestead farmer, was a natural choice.

“I told him, ‘I’ll take on this project, but you have to give me 12 months,’” Umbarger said. “I want to go into this intelligently, with a plan and a research model in mind.”

Kessel’s timing was serendipitous: As Umbarger was planning the garden, other departments were taking significant steps toward sustainability. A gift from the R.B. Annis Foundation had allowed the Academy’s Math and Science Division to build a state-of-the-art botanical laboratory envisioned and designed by division director Dr. Mary Ellen Newport. Meanwhile, the Advancement Department, with support from Umbarger and Newport, was applying for a grant from the Allen Foundation to be used for a campus-wide composting facility.

“I said, ‘These things fit nicely together, and they’re all exciting from a sustainability perspective,’” Umbarger said. “‘Let’s make a larger entity out of our school garden.’”

In 2017, Interlochen received its first grant from the Allen Foundation. Umbarger and her team—two gardeners, an intern, and dozens of volunteers—put the funds to work building a hoop house, nine raised beds, a pollinator garden, and a permaculture scape. The remaining funds went towards a future composting facility, which Umbarger and Executive Director of Facilities and Maintenance Eric Gray were researching.

Umbarger and Gray visited other organizations to learn more about composting operations. The two ultimately decided to design their own, a 100-foot-long, multi-bay system that would meet Interlochen’s unique needs. The facility opened in June of 2019 and now collects and processes all pre- and post-consumer food waste from Stone Cafeteria as well as all organic landscape waste.

As gardening and composting efforts gained momentum, Umbarger reduced her counseling load and began working part-time in both capacities. In June 2019, she left counseling to accept the position of Sustainability Manager.

“I wanted to hire someone else to do this, because I really loved counseling,” she said. “But as I spent more time with my hands in the soil, and learned more about sustainability, I fell in love with it.”

Part of that love came from Umbarger’s educational efforts. Since 2017, Umbarger and her team have been offering free seminars for the local community. In 2018, Umbarger launched the Academy’s first Agricultural Science course, which featured units in composting, soil science, botany, aquaponics, and other regenerative, sustainable agricultural techniques. In 2019, Umbarger began offering special cabin-night programs for students of Interlochen Arts Camp.

But Umbarger has not just been teaching children: As structures continued to pop up and the complex began to earn accolades, Umbarger has found herself teaching her colleagues as well.

“I’ve really become the face recycling and composting on campus, and that has allowed me to work with many different departments on a wide variety of sustainability projects,” Umbarger said. “For example, the Scholarshop reached out and said, ‘We want to get rid of plastic bags. What might that look like?’ People from every department are coming up with really exciting ideas on their own.”

Taking root in the campus community

“I think the biggest change is that sustainability is now a buzz word on campus,” Umbarger said.

That buzz will continue to grow in the summer of 2020. Umbarger’s long-awaited outdoor kitchen—complete with grill, bread oven, sinks, and work space—will be installed as soon as the last of the snow melts. Umbarger and her team will also be introducing large-scale sustainability efforts at Arts Camp 2020. “We plan to get composting online at all three cafeterias, which means two more kitchens and thousands of students and staff,” Umbarger said. “We’re also bringing recycling to every cabin and every headquarters in the Camp divisions.”

Reaping results and giving back

Most importantly, however, Umbarger looks forward to the completion of two more hoop houses that will serve not as educational laboratories, but as production spaces cultivated for optimal output. Half of this food will be served in Interlochen’s cafeterias; the other half will be donated to the food pantry at nearby Redeemer Lutheran Church.

“Redeemer’s food pantry serves more than 100 local families, but the pantry receives limited amounts of their produce directly from a farm,” Umbarger explained. “Most of their produce comes from ‘food rescue,’ which means they get what grocery stores can no longer sell because it’s about to expire. We’re excited to be able to provide these families with vegetables that come directly from our farm to their table. For our students, it’s an opportunity to learn about food accessibility and security, poverty, and appreciating what you have. Our goal is not only to teach them about growing methods, but also the importance of ongoing, meaningful, and connected community service.”

Thanks to Umbarger’s service, Interlochen has transformed into a healthier, more sustainable community. Just three years after the Board’s resolution, Interlochen Center for the Arts was designated a U.S. Department of Education Green Ribbon School. Umbarger and Kessel, along with trustee Cindy Hann, student Cookie Dutch, and “Green Team” member Lauren Greene accepted the honor at a special ceremony at the White House on Sept. 25, 2019.

Umbarger says everyone can take small steps towards a brighter future. “Recycling and composting are two easy ways to live a more sustainable life,” she said. “Volunteer in your community in a way that is meaningful to you. Plant trees, promote biodiversity by not mowing your dandelions in the spring, and add pollinator-friendly native perennials to your flower beds.”

“Collectively, we can take care of our earth. If every person does one small thing, we can make huge ripples.”