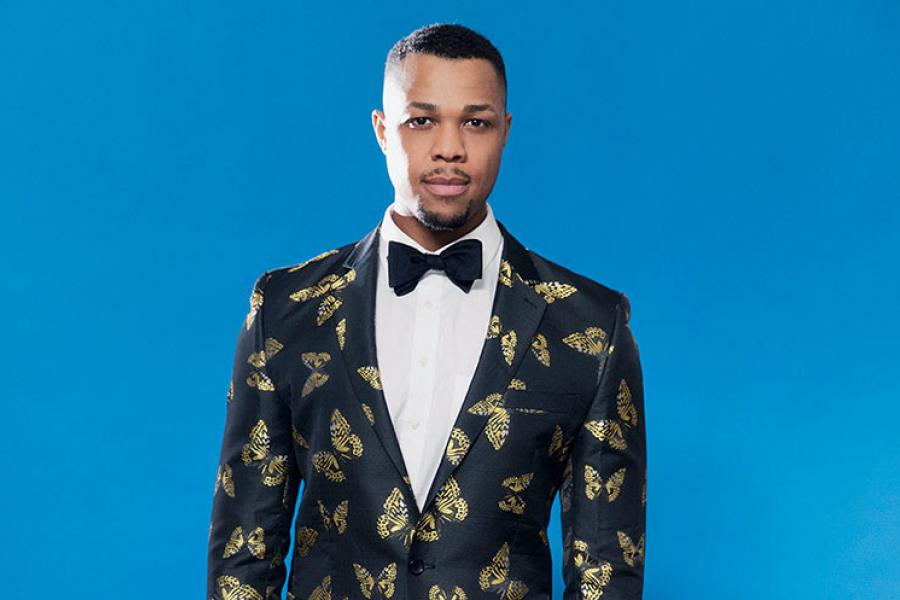 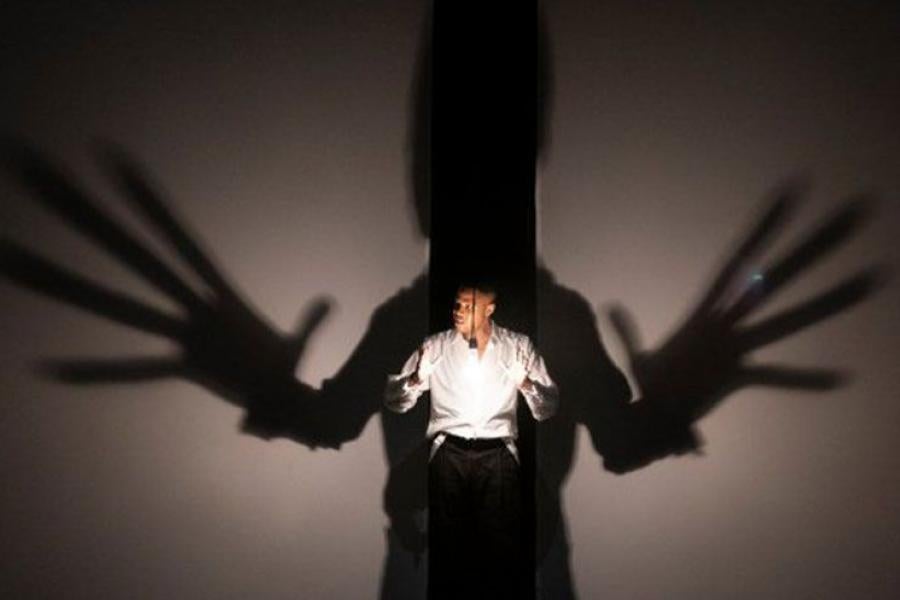 Davóne Tines in The Black Clown at the Mostly Mozart Festival. Photo by Richard Termine. 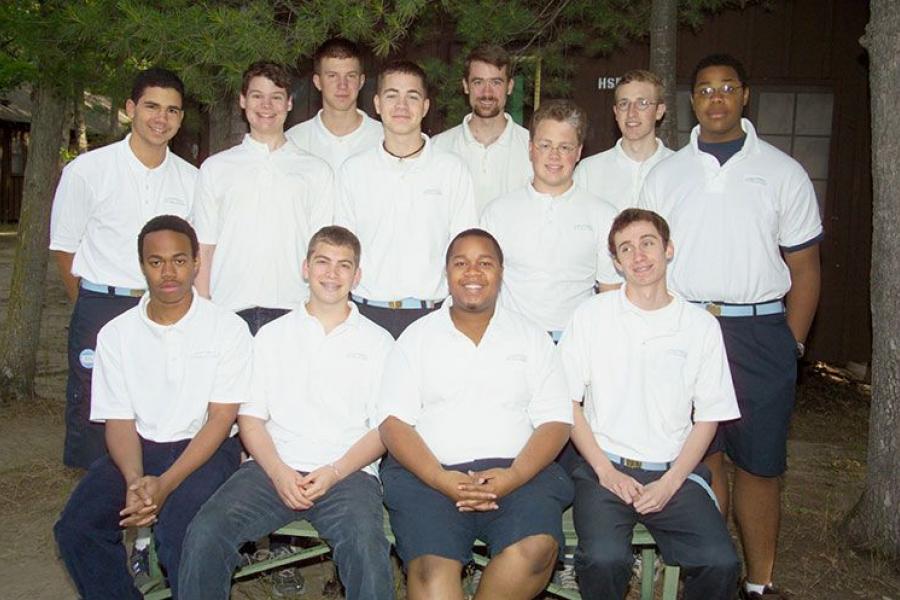 At Interlochen, we often challenge students to connect their artistic expression to civic engagement and use their voices to reflect their perspectives. The celebrated bass-baritone Davóne Tines (IAC 04) has done just that. As he wept for George Floyd, Breonna Taylor, and many other recent Black victims of police brutality last spring, he knew he had to do more than grieve. “All of this sadness and turmoil needs to lead to something,” he said. “Some people call it activism. Others call it uplifting Black ideals or stories. I call it being therapeutic and reflective of my existence.”

In collaboration with pianist Conor Hanick (IAC 96) and composers Igée Dieudonné and Matthew Aucoin, Tines created “VIGIL,” a moving music video performance dedicated to the memory of Breonna Taylor. The video premiered on Sept. 30 on Lincoln Center’s social media channels, and Tines performed the world premiere of its orchestral arrangement with the Louisville Orchestra on Oct. 3.

“I wanted this video to be very, very intentional,” Tines told CNN. “This is a tragedy… and you feel something about it, so you should do something about it.” Accordingly, the video ends with simple instructions for translating empathy into action.

“VIGIL” is one of several recent works Tines has premiered that contends with racial injustice. In 2019, Tines and composer Michael Schachter brought “The Black Clown” to the Mostly Mozart Festival, a critically acclaimed musical theatre piece that examines racial oppression—and resilience—throughout the arc of Black American history. The performance followed Tines’s lauded portrayal of an escaped slave during the Civil War in Matthew Aucoin’s well-received 2015 opera, “Crossing.”

In a recent interview, Tines chatted with Crescendo about his search for truth, the lasting influence of a voice teacher he studied with at Interlochen, and “the coolest thing he’s ever been a part of.” (The interview has been edited for brevity and clarity.)

What has been the response to “VIGIL” so far?
There have been a lot of very touching, positive responses. A former friend from high school wrote to say that she watched it with her two children. She said her seven-year-old son cried when all the names appeared and said, “We have to do something.”

Beyond that, several board members from various groups have called me to say thank you for bringing this to their attention. I’ve also been working with Teddy Abrams, the conductor of the Louisville Orchestra, to put together a coalition of organizers to have an ongoing conversation about what it means for art to point to injustice in their city.

You’ve created several works that speak to the specific experiences of African Americans, while illuminating shared human values. What draws you to this theme?
I think when people stand on stage in front of people to sing, they should do everything in their power not to lie. There are various schools of acting that teach methods for accessing your true lived experience, and using art as a conduit to that. This makes your performance an overt excavation of your actual self, and how it’s articulated through art. We should reflect on who we are, which also reflectively makes us think about who other people are.

I continue to find that we are all just people. In “VIGIL,” when I sang “Where there is darkness, we’ll bring light,” that’s what I needed to say at that time. I needed to galvanize the idea that all of this sadness and turmoil actually need to lead to something.

“The Black Clown” was the same thing. We spent eight years building a show with all the razzle dazzle of music, theater, and Broadway and the genius of Langston Hughes to unpack our entire history in this country and convey the most important thing that we can say to an audience: we are all human.

Before earning a master’s degree from Juilliard, you studied sociology at Harvard. How does your non-musical education inform your artistic work?
Sociology is the crossroads between economics and anthropology. It’s kind of like the psychology of the social organism, as opposed to the psychology of an individual. Considering where we’re at right now, we have to think about the broader picture.

When it comes to the arts, if we always treat classical music as a dying, sinking ship, let’s also reflect about what that might mean. There are complete parts of the world—in terms of ideologies, levels of income, and thought—that have just not been engaged. And so the material dies, because the group of people associated with it don’t know how to further that story. Having studied sociology, I am trying to connect actual art making to lived experiences.

I still remember the ensemble piece that I performed from Così fan tutte, ”Soave sia il vento.” Having come from the bass section of a choir, I loved the idea of grounding a musical piece. Just physically and mentally, what does it mean to be the base upon which people can build? In this ensemble piece, I had a lot more agency as the solo bass singer of a trio.

It was also really powerful for me to work with Mary Stucky, my voice teacher, a Black woman who had a lot of knowledge and felt like a very grounding, welcoming, and warm force. I think it was really special and unique that she was my first formal voice teacher. I still remember basic foundational things that she told me, that I still come back to.

What do you remember most about your Interlochen experience?
The experience I remember most about Interlochen was the combined choirs performing Arvo Pärt’s “Bogoróditse Djévo.” That blew my mind. I had done choir before, but I had never heard of Arvo Pärt. It’s this one-and-a-half-minute-long thing, and it seems crazy. It’s in Russian, and I had never sang in Russian. I still remember my part. That piece of music is incredible, but to do it with 200 people was the coolest thing I’ve ever been a part of. That was a deeply special moment that will remain a very formative memory for me.