With a music video directed by fellow alumna Vivian Full, “Don’t You Know?” serves as a gentle ode to perseverance through tough times. 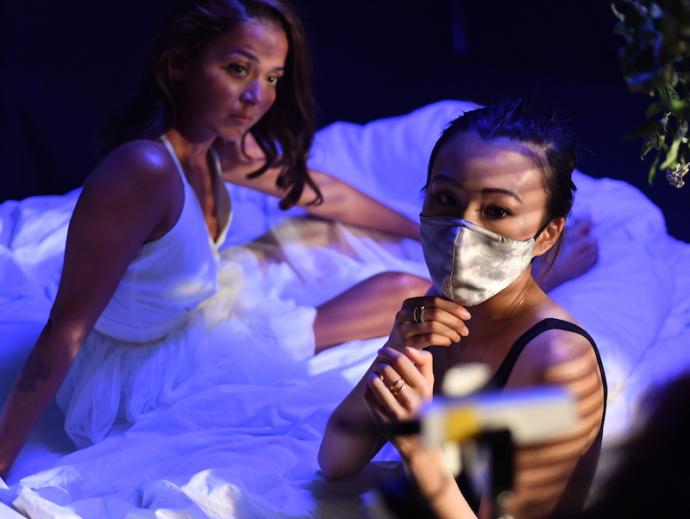 Soon after singer Claudillea Holloway (IAC 10, IAA 11-13) performed an original remixed version of Mozart’s celebrated ‘Queen of The Night Aria’ on The Voice UK in 2018, rapper Will.I.Am lept onto his chair in excitement. Holloway—now known simply as Claudillea—was already establishing herself as a fusion artist who blends operatic vocals with genres like pop, trap, and hip-hop.

Originally from the U.K. and raised in Borneo, Malaysia, Claudillea studied opera at Interlochen before earning her Bachelor of Music in voice at the Manhattan School of Music. Now based in London, she released her debut EP last summer. Making operatic vocals more accessible remains top of mind. “For me, the opera world actively excludes certain demographics, and I want to help make it more accessible. If Mozart were around today, his music would be covered in Radio 1 Lounge and done in a completely different way. I want millennials and Gen Z’s to not squirm when they hear opera.”

With her newest song, “Don’t You Know,” Claudillea offers listeners another message too: even in these challenging pandemic times, you’ll get through it. Wonderland magazine calls it a “hypnotic single boasting both ethereal atmospherics and sensual vocals.” The song’s music video was directed by fellow Interlochen alumna Vivian Full (IAA 10-13), a Canadian director and actor who has worked in theatre, film, and television.

Here, Claudillea reflects on that partnership and how Interlochen opened her eyes to the “infinite possibilities” sparked by collaboration.

What do you hope people take away from this song?
I wrote this song for someone very special to me who was going through a rough time, hoping it could be a song they could turn to whenever they were feeling low. Mental health is one of the most important things globally right now, and I’d love for anyone and everyone to find solace in this song and hear it as a gentle reminder that you will make it through.

How did you and Vivian end up collaborating on this music video?
When I began thinking about music videos last year, I was clear with myself that I wanted all of the ones off my debut EP to be directed by women. I had seen on Instagram that Vivian was based in London and was directing. I reconnected with her, and despite almost not being able to do it, due to her being stuck in Canada over COVID, we managed to pull it together!

How did Interlochen influence your career and perspective?
My years at Interlochen are some of my fondest. It really was where I felt and began to believe that anything was possible. Being surrounded by the best creatives of my generation inspired me so much, and they all continue to inspire me. I love watching everyone's journeys unfold in real time.

One of the most important things I learned was the art of collaboration. Our opera director at the time, Scott Skiba, created this opportunity where creatives from across disciplines—composers, musicians, dancers, actors, and creative writers—collaborated on a new work. That really opened my eyes to infinite possibilities.

"Don't You Know?" by Claudillea