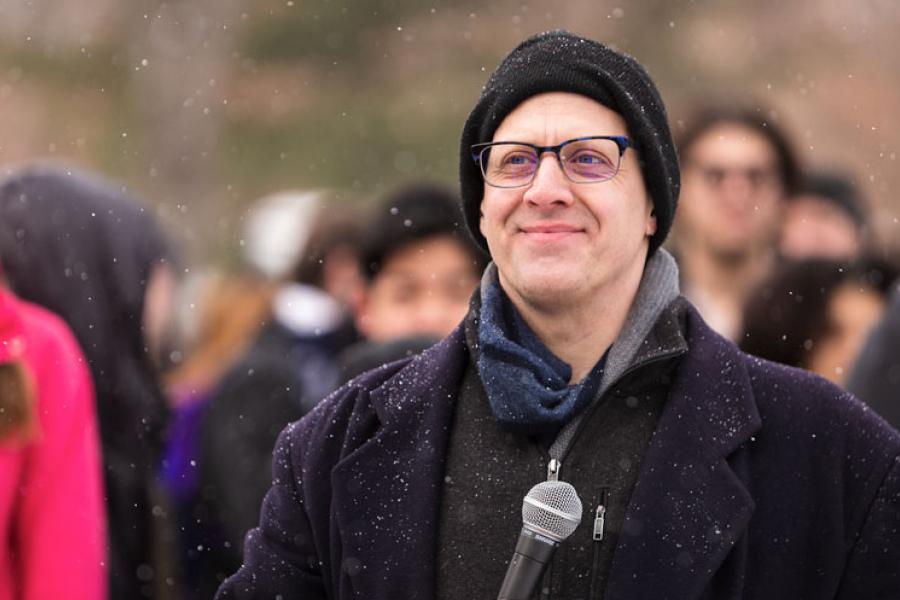 Duvall explains Transient Landscapes to the Interlochen Arts Academy student body prior to the performance. 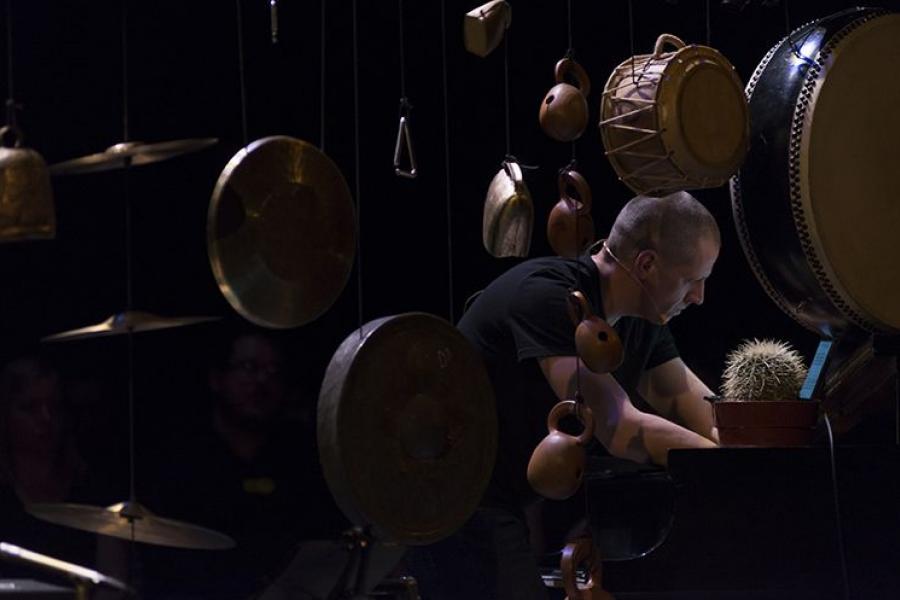 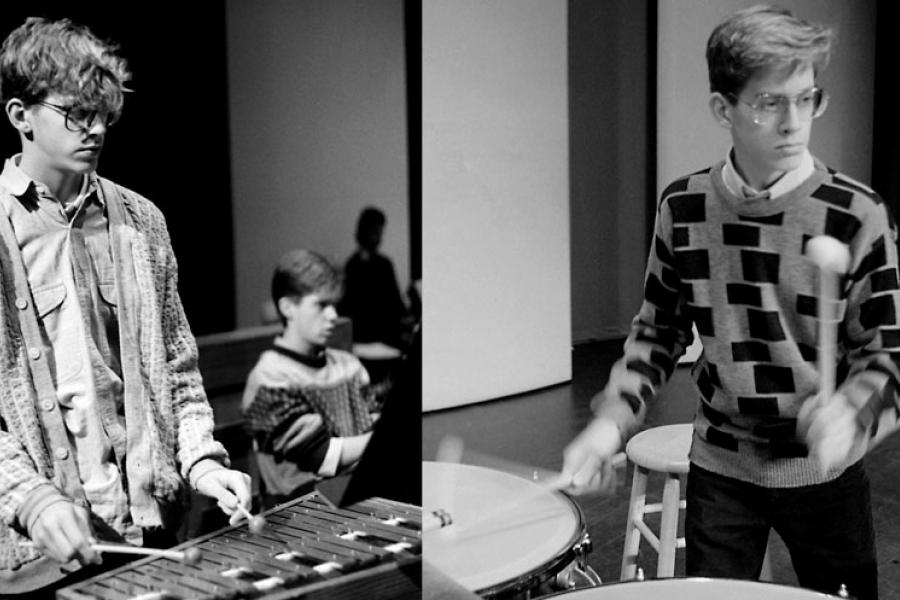 Duvall as a student at Interlochen Arts Academy. 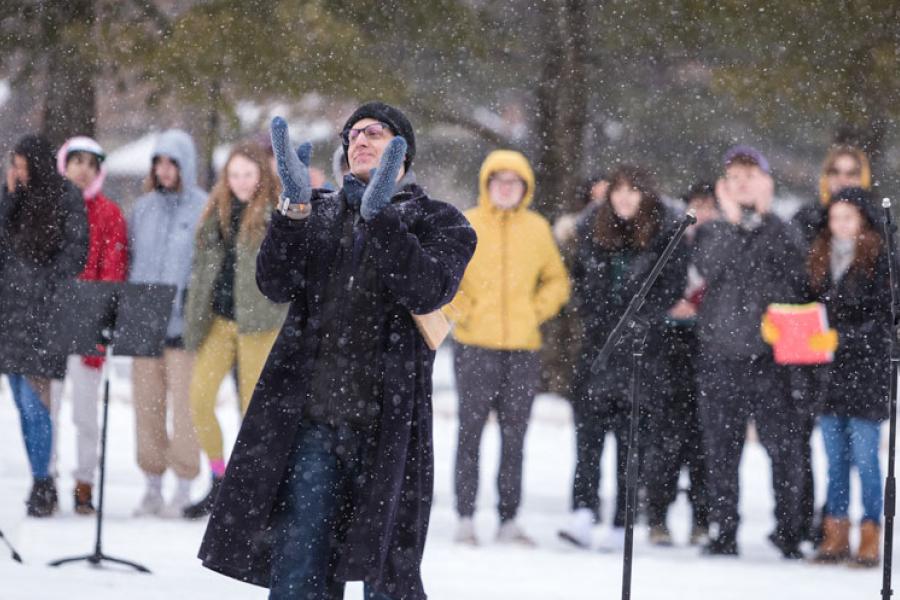 Before pursuing a career in music, Matthew Duvall (IAA 85-89, IAC/NMC 84-85) dreamed of becoming an architect. In a way, Duvall still is, but instead of cement and steel, his medium is sound, crafting Grammy-winning music with his colleagues in the contemporary music ensemble Eighth Blackbird.

Since its inception in 1996, Eighth Blackbird has commissioned and premiered hundreds of works by some of the world’s most recognizable living composers, including: David Lang, Jennifer Higdon, Bryce Dessner, Nico Muhly, and Steve Reich, whose Double Sextet went on to win a Pulitzer Prize.

“For a long time Eighth Blackbird was everything,” Duvall said during a recent interview with Interlochen Center for the Arts. “Propelled out of programs and bookings...I had tunnel vision.”

Despite a full calendar, Duvall still found time to stay engaged with his alma mater. Working as a liason, Duvall helped to create a semester-long collaboration between the Arts Academy and Eighth Blackbird in 2015.

Throughout the 2017-18 school year, Duvall worked with Director of Percussion Keith Aleo and the Arts Academy Percussion Ensemble to celebrate the life and work of famed composer Steve Reich through a yearlong festival which culminated in a concert featuring Arts Academy students, Eighth Blackbird, and Grammy-winning Chicago-based group Third Coast Percussion.

This year, Duvall is back on campus orchestrating several interdisciplinary artistic experiences for Arts Academy students, including an immersive work about the climate crisis, Transient Landscapes. Below is an excerpt from a conversation with Duvall during a recent campus visit.

How did you end up in the arts, and how did you learn about Interlochen?
I grew up in rural Pennsylvania, and I had an elementary band teacher who really pushed me. My parents went to Michigan State University, and they knew of Interlochen. So, they told me I should check it out. I ended up going for two summers. While at Camp, I learned about the Arts Academy, and I knew that I wanted to come.

You attended Interlochen all four years of high school. What made Interlochen the right place for you?
I loved the academics. I loved the conversations that I had that I couldn’t have had back home.

Were you planning on a career in music after graduating from Interlochen?
At the time, I thought I was going to be an architect. I had romanticized the idea of the New England colleges with their humanities programs. It wasn’t until my junior year at Oberlin that my priorities started to switch. While at the conservatory, I was exposed to chamber music, even though my program was more focused on orchestral music. Michael Rosen, my instructor, saw me spending hours and hours on material that wasn’t orchestral. Rosen let me slack on the orchestral stuff that was in the curriculum. He didn’t have to, but he did anyway. A good teacher realizes his students’ strengths. So, being his apprentice shaped whom I’ve become.

How did Eighth Blackbird find its footing in those early years?
After we all graduated from Oberlin, we found out about a chamber music program that was opening up at the University of Cincinnati College-Conservatory of Music. The school was entirely accommodating, and it was an incredibly rewarding experience. We were able to use our time there to learn, keep playing, and make decisions about our future. We ended up in Chicago, and started contacting a bunch of Chicago schools asking about setting up residencies.

Eighth Blackbird ended up working with several institutions: University of Chicago and Northwestern University, to name a few.

Does the business side of the industry come naturally to you?
Percussionists intuitively know how to adapt, and know how to communicate. [Laughs]

Switching gears, how did you reconnect with Interlochen? Or had you stayed in touch since graduating?
Once I was admitted to the Academy as a freshman, I took summers off from Interlochen. I worked one summer in recording services, but I stayed away for a while. Having a break was good, because you don’t come back as an extension of who you were at Interlochen.

A few years ago, the Office of Engagement reached out to me and invited me to an Engagement Council weekend. I agreed, and came to the event. I was exposed to a whole spectrum of topics across the institution. I thought, “I could find ways to be really helpful.”

So, conversations started. That’s how the Steve Reich Festival came about, how we were able to bring Eighth Blackbird, and everything else.

How did the Engagement Council inform some of the ideas you’ve brought to Interlochen?
One of the questions that was raised was, “How can Interlochen be both a place of tradition and innovation?” I thought that we had the tradition down. So, how do we shore up that innovation aspect?

One of your ongoing projects involves commissioning an original piece that our Arts Academy Percussion Ensemble will premiere. Could you speak about how that came about?
We are in our second year of this annual project, and it’s been really rewarding. I wanted to find a way to allow students some ownership of their curriculum, to give them the experience of doing something for the first time. Keith [Aleo] and I do not pick the composer. We narrow it down, and the students get to research and vote on who they want us to approach for the commission. This year’s piece will premiere in April, and it’s exciting to see how invested the students have been in the process.

You were once in the shoes of those percussionists. What advice do you give them?
The work you do right out of college does not define the rest of your life. If you do something good, great—but know that you aren’t stuck trying to outdo yourself for the rest of your life. You can find something new, and it’s OK to start that new thing whenever. Because there is no behind. You’re on track on your track.