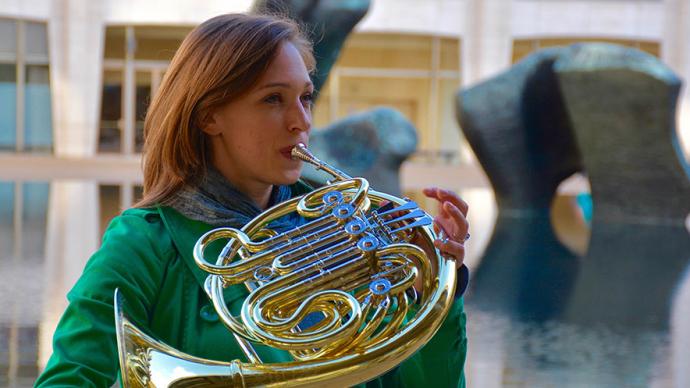 With guidance from her flute-playing mother, Sterrett chose the horn, launching a decades-long love for the instrument. She graduated from Interlochen Arts Academy in 2004, going on to earn a bachelor’s degree in horn performance from the University of Wisconsin-Madison and a master’s degree in horn performance from Yale University. Sterrett has also been a participant in the Ensemble Connect program at Carnegie Hall and a prizewinner in the International Horn Competition of America.

In 2013, Sterrett joined the New York Philharmonic as associate principal horn. She is also active as an educator, teaching horn at Rutgers University and New York University.

We caught up with Sterrett to learn more about her musical childhood, what advice she has for young artists, and her journey to the New York Philharmonic—a journey that began at Interlochen.

How did you become interested in classical music?
I was lucky enough to grow up near Interlochen, and my family is very into music. My mom is a flute player and she’s always been active in community music. Some of my earliest memories are of hearing her performances with the local symphony orchestra or community band.

We also listened to a lot of public radio, including Interlochen Public Radio. I heard classical music all the time, both at home and in the car. I think there was always an expectation that my siblings and I would all at least try an instrument.

Why did you choose the horn?
The horn is one of those instruments that you don’t have 20 kids wanting to play. I wanted to play the saxophone; it was actually my mom who thought the horn would be a good fit. My middle school band director also kind of twisted my arm: ”You did so well on your entrance exam! There will only be two horns, so you’ll be special!” Every 10-year-old wants to be special.

How did you end up at Interlochen?
When I was in eighth grade, I started studying with Julie Schleif, who was the horn teacher at Arts Academy at the time. She suggested that I audition for Camp, and later for Academy.

What are some of the lessons you learned at Interlochen that you’ve carried with you into your career?
The biggest thing is the importance of holding yourself to a high standard. What was so great about Interlochen was that the faculty really treated you like you were a young professional, not a kid. They gave us a lot of autonomy, a lot of responsibility, and a lot of high-level expectations, which taught us the level of hard work and commitment that it takes to make it in an artistic field. Being held to such a high standard really helped us to figure out how to be independent and how to think critically about what we were doing in our academic and artistic classes.

How did you decide you wanted to pursue a career in music?
Before I went to Interlochen, I was fascinated with and loved music, but I didn’t know what the next step would be. Interlochen helped me to understand what I needed to do.

I decided to go to the University of Wisconsin instead of going to a conservatory because I wanted to keep the door open academically. When I got to Madison, I found that I was well prepared because of my Interlochen experience. I had this sense that music was something worthwhile for me to pursue, that I had the right tools to make the most of my college education, and that I had the maturity and work ethic to commit wholeheartedly to music. Although you never know if the arts are going to be a viable career path, I went in full bore without a backup plan.

You went from playing in the New Haven Symphony Orchestra to playing the New York Philharmonic. What was the audition process like?
It was crazy! All my professional experience up until that point was with a couple of regional orchestras in Wisconsin and the New Haven Symphony, which I played with for one year while getting my master’s degree.

I remember the first time I played with the Philharmonic. I got a call to play as a substitute after an audition I had done, even though I didn’t get the job at that time. I remember calling Julie and saying “Should I tell them I’ve never played with a professional orchestra before?” and she said, “Don’t tell them. Just prepare like you normally would.”

I learned that you’ll never feel 100% ready for all the challenges and opportunities that might come your way, but that doesn’t mean you shouldn’t try for them. Getting the job with the Philharmonic happened because I wasn’t afraid to take the auditions and to really try my best. I think that’s such an important part of being an artist or a musician: being willing to go after opportunities and put yourself out there. Eventually, the alchemy of the right opportunity at the right time is going to come along. I certainly didn’t go into the audition thinking I would get this. All I could do is go in as prepared as I could be, and it ended up working out.

In the arts, you really have to take on the challenge that seems insurmountable. I took 20 auditions—including four for the Philharmonic alone—before I was successful. It’s all about persistence and refusing to quit.

What should young musicians know before pursuing a career in classical music?
One thing that I didn’t know is that no matter where you go in your career, being a musician means that you’re a forever student. The process of learning your craft and developing your voice will continue throughout your whole career, which is something for students to bear in mind. It’s important to keep a growth mindset; you can always challenge yourself more. I think that’s a beautiful thing about music.

You’ve had the opportunity to teach quite a bit, both at the university level and at Interlochen Arts Camp. What’s one piece of advice you give all your students?
I’m a big proponent of listening to as much music as you can, going to as many performances as you can, and taking in as much as you can as a young musician (or a musician of any age!) You can’t teach curiosity about the craft—that’s something we all have to develop for ourselves.

Is there anything else you’d like to share?
I’m so grateful to Interlochen for showing me the path. I came into Interlochen ready to learn, and it changed what I thought I could do. Interlochen was tremendous for helping me gain confidence in myself and my ability to work hard and overcome challenges. I would not have become a professional musician without Interlochen, and without Julie.