Claud Mintz opens up about their music, representation in the arts, and their time at Interlochen. 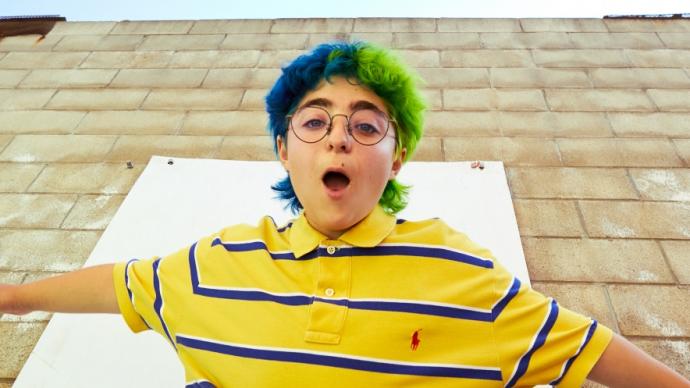 The music video, a loving queer homage to the 2009 hit indie film 500 Days of Summer, follows Claud as they navigate a house party—watching their love interest pine for someone else. At the time of its release, Billboard called “Wish You Were Gay” an “aching love ballad.” Since then, it has been viewed over 1.3 million times on YouTube, and has been streamed over 3.4 million times on Spotify.

For a song about gay rejection and heartache, Claud found a way to pay their success forward. In a magnanimous gesture, Claud began selling “Wish You Were Gay” merch with 100% of the proceeds going to support The Trevor Project, a 24-hour national toll-free confidential suicide hotline for LGBTQ youth.

“I decided to donate all proceeds of my ‘Wish You Were Gay’ merch to The Trevor Project because it's helped me, and so many others survive the toughest times,” Claud said. “I wanted to give back, and say thank you in some sort of way.”

In August of 2018, Claud and fellow musician Josh Mehlingin released their first EP Toast. Prior to the outbreak of COVID-19, Claud opened for the alt-rock group The Neighbourhood and indie band The Marías on their respective national tours. As a solo artist, Claud’s work has been recognized by a number of industry outlets, including Paper Magazine, POPSUGAR, and The FADER—just to name a few.

Claud’s sound has been described as “happy [yet] sad,” “melancholic,” and “campy.” Yet for this 21-year-old-artist, these adjectives can’t describe the nuanced songwriting and adept musicality that has made Claud a rising star in the industry.

So, how did this talented singer-songwriter find their way to Interlochen? Why did they decide to work with fellow Interlochen alumni on their music videos? And what advice do they have for other genderqueer artists? Here is our interview with Interlochen alum Claud.

Tell us about your musical journey.
I started messing around on instruments when I was a kid, but I really fell in love with music in high school. I knew right away I wanted to write my own songs, but it took time to figure out how to do it. I went to Interlochen my senior year of high school to get better at the technical parts of songwriting, like lyric writing and chord structures. For college, I went to the music industry program at Syracuse University and started a band called Toast with my best friend I met there. After we put out an EP freshman year, we got asked to go on tour. My friend stayed in school, but I dropped out to pursue a career. I’ve been touring and releasing music for the last two years.

How did you find out about Interlochen?
I grew up visiting Traverse City every summer because my mom’s best friend lives there. I really started hating high school around my junior year and my mom and her friend convinced me to audition for Interlochen.

What are some things that stand out to you from your time at Interlochen?
Stand-out memories from my year at Interlochen were the one-on-one time with my teachers, bonding with the people in my dorm, open mic nights, and going for walks in the woods with my ecology class.

From Fader to Billboard and beyond, your work has been featured across the internet. How has it been sharing your music with a new audience? What do you hope that they take away from your work?
It’s been super cool and also scary sharing my music with the world. It’s weird to have people you don’t know try to make sense of you. If anything, I hope my listeners take away the fact that you don’t have to change anything about yourself for others to like you more.

You have collaborated several times with your Interlochen peers since graduating. Beyond convenience, what led you to that decision? How has it been working with friends?
I reached out to Christina Xing a year after we graduated because I had just moved to Los Angeles and needed someone to help me make a music video. I remembered her making the coolest stuff at Interlochen and I really liked her take on love stories and narratives. The first music video we worked on was her first music video ever, and this week we actually just finished our fourth video together.

Could you speak about the importance of representation within the arts? What advice would you offer other non-binary or genderqueer aspiring artists?
The most important thing to have in the arts is representation. Art is all about perspective and experience, so it’s boring and useless to have stories told from the same perspective over and over. I guess the advice I’d give other genderqueer artists would be to surround yourself with people who remind you that your voice is important and worthy of being heard.

What’s next for you?
I’m releasing my first album in 2021! I'd like people to know that my album is just as versatile and ever-changing as I am as a human being! People have different moods and sides to them and so does my album.

In October 2020, artist Phoebe Bridgers signed Claud to her new label Saddest Factory, her recently launched imprint with Dead Oceans. Claud’s song “Gold” was selected as the label’s first single. To learn more about Claud or to purchase “Wish You Were Gay” merch in support of The Trevor Project, visit claud.online.