A conversation with Interlochen alumnus and “The Big Flower Fight” judge Kristen Griffith-VanderYacht. 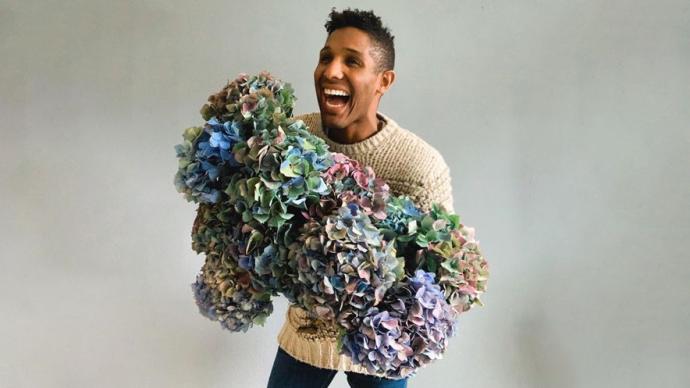 As new fathers, alumnus Kristen Griffith-VanderYacht (IAA 00-01) and husband Aaron can’t help but share their love for the arts with their son, Hugo.

“Growing up in a house where everyone sings to you, it’s going to be a part of his identity,” Griffith-VanderYacht told Interlochen Center for the Arts during a recent interview.

“But we’re not actively pushing it on him,” Griffith-VanderYacht said, before adding with a laugh, “As soon as your parents tell you something is cool, you’re like, ‘Forget that.’”

As owner and creative director of Wild Bloom—an internationally recognized Seattle-based floral design company—the arts are and continue to be an integral part of Griffith-VanderYacht’s life and career.

Known as a florist to the stars, his floral creations have been featured in People Magazine, Martha Stewart Weddings, and The Knot, and have been shown on E! Network and ABC’s Good Morning America.

Those of us who have spent the past few months binge watching shows on our favorite streaming service might recognize Griffith-VanderYacht from his latest artistic endeavour: serving as the main judge on Netflix’s hit reality competition, The Big Flower Fight.

Akin to the acclaimed cooking series The Great British Bake Off, The Big Flower Fight swaps flour for flowers as 10 teams are tasked with creating large, intricate, and impeccably designed floral installations.

Griffith-VanderYacht, with his bright smile and colorful suits, mentors each team and critiques their floral creations alongside series presenters Natasia Demetriou and Vic Reeves—until just one team remains.

As a lifelong performer, being in front of the camera came easy to Griffith-VanderYacht.

During his youth, he sang, danced, and acted around southeast Michigan as a member of the Mosaic Youth Theatre of Detroit. Griffith-VanderYacht always felt like an outsider, but in the arts he found a place to fit in.

“Art is supposed to give you opportunities. To either get you out of your current situation, or to enlighten you in that space,” Griffith-VanderYacht said. “It’s supposed to be transformational, regardless of the circumstances around it. What’s important is the spiritual and transformational impact while you’re in it.”

“I was convinced that going to Interlochen was the ticket. This was the pathway to get me into really great colleges. Beyond colleges, this was a stepping stone to open new doors,” Griffith-VanderYacht said.

At Interlochen, Griffith-VanderYacht found kindred spirits in his classmates: Fellow outcasts, unicorns, and big-fish-in-small-ponds that made their way to northern Michigan.

Griffith-VanderYacht took full advantage of his time at Interlochen both on and off the stage. He performed or worked on nearly a dozen performances, including: stage crew for As You Like It, starring in the One-Act Festival, dancing in drag in Aristophanes’ Lysistrata, and working alongside friend Dane Joseph to coordinate a Black History Month Presentation.

“Interlochen wasn’t just about the arts. It was about finding myself, and there’s power in that,” Griffith-VanderYacht said. “Sure, I wasn’t the lead, but everything I did was so enriching. Not feeling like an outcast was more important than anything else.”

Following Interlochen, Griffith-VanderYacht studied at the Boston Conservatory. Eventually, he relocated to New York to continue his acting career after being cast as the understudy/swing for Angel in the national tour of Jonathan Larson’s RENT.

While with RENT, Griffith-VanderYacht began taking online graduate courses in Psychology through Columbia University. This move was inspired by his interest in the healing power of the arts, and to him, felt like a natural transition into the next part of his life.

“I was reexamining what I wanted the rest of my life to look like,” Griffith-VanderYacht said. “In many ways when you’re on stage, you hold up a mirror for the audience. The same sort of process applies in therapy. I knew that whatever I ended up doing—I had to find a way to connect and inspire growth in people.”

After the tours, he split his days between his coursework and interning with the Brooklyn-based floral shop Sprout Home.

“That internship opened my eyes,” Griffith-VanderYacht said. “It solidified where I had to be. I can still do what I want. Inspire people, and help people through my art. If you’re lucky, someone else will see themselves in your art.”

Griffith-VanderYacht fell into flowers, and by 2011 the budding psychologist had bloomed into a world-class florist.

In 2016, he and husband Aaron relocated to Seattle, Washington, where they fostered and adopted son Hugo. Then one afternoon an Instagram DM (Direct Message) invited him to audition for The Big Flower Fight, and the rest, as they say, is history.

But Griffith-VanderYacht doesn’t take any of it for granted. He knows how rare it is to see a Black, gay father and florist on television.

“There are so many opportunities out there, and I want little Black and Brown kids who see me on TV to know that those opportunities are out there for them, too,” Griffith-VanderYacht said.

But for all young artists struggling to find their way, he urges them to embrace their uniqueness.

The Big Flower Fight is now streaming on Netflix. You can follow Kristen on Instagram at @kristengvy.