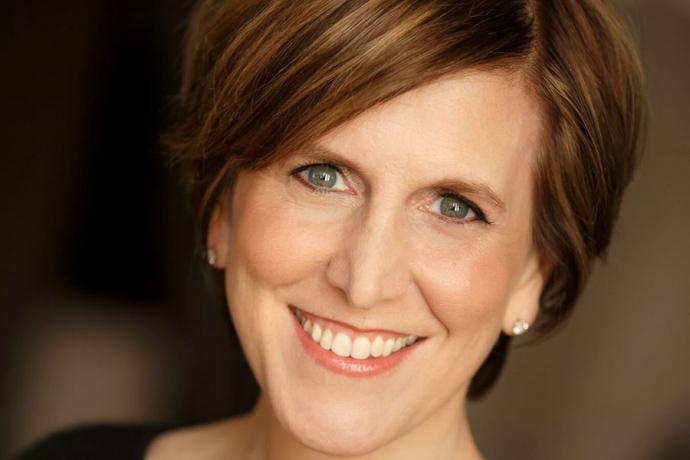 Kristin Caskey’s (IAC/NMC 85-86) first inkling of her future career came when she took the stage in her third grade production of Mother Goose Goes to Hollywood.

“I didn't know exactly what I'd be doing, but I knew that my life was going to be spent around theatre in some way,” she says.

In a case of art imitating life, Caskey’s on-stage role as the producer in Mother Goose foreshadowed her off-stage calling as a Broadway producer. Since beginning her career with Fox Theatricals in 2004, Caskey has produced numerous Broadway hits including Thoroughly Modern Millie, Legally Blonde, Bring it On: The Musical, and Caroline, or Change, among many others. In 2015, she received the Tony Award for Best Musical as one of the lead producers of Fun Home, an innovative adaptation of Alison Bechdel's graphic memoir of the same name. Today she serves as executive vice president of content and creative at Ambassador Theater Group, overseeing the producing department and programming at Ambassador’s North American venues.

In March 2020, the emerging COVID-19 pandemic forced Broadway—like so many other businesses—to close its doors. Since then, Caskey and her colleagues have been working tirelessly to bring Broadway back and establish industry-leading health-and-safety protocols. Thanks to their efforts, Broadway made its triumphant return on Sept. 14.

“There were a few touchstones in my life that absolutely solidified theatre as my career, and one of them was going to Interlochen,” Caskey recalls. “I realized the value of having your passion be part of your day-to-day life. Interlochen provided a range of how that passion could be informed, and all the different roles that one might be able to play.

I remain very grateful that I’m in a profession I love, and that dedication was reinforced by the absence of theatre over the past year. There’s nothing like it, and I’ve missed it tremendously.”

Here, Caskey discusses her journey as a theatre professional, leading Broadway’s return, her advice for aspiring actors, and upcoming projects.

What ultimately led you to focus on producing instead of acting?
When I got out of college, I moved back to Chicago and was working with a number of different theatre companies. I also interned for a woman named Susan Booth, who has ended up being a major mentor in my life. She suggested producing, which I knew little about at the time. I started at Fox as an assistant, realized producing was the perfect fit, and luckily worked my way up.

What I love about producing is that it involves both the creative and business sides of theatre, and puts forth a great challenge: How do you make art commercial? I find a lot of joy in trying to answer that. I believe that great art can also be very commercial.

You’ve mentioned in previous interviews that producing is all about collaboration and communication. Why do you think these are such important skills in the arts?
Whenever you go to a show, you’re given a playbill with a whole list of names. There’s the name of the star, and the director. But there are also designers, every actor on stage, and the people backstage running the show. And then you have the producers, who connect to those in charge of marketing, ticketing, and sales. When you put all of these people together, there has to be a unified vision for the show and communication amongst all the various individuals in order to reach that goal. That’s why collaboration is so important.

In my mind, the role of a producer is to make sure that everyone feels supported in reaching that vision. When I look back on the shows that have been most successful, there’s been an ease because everyone was on the same page. A producer is primarily responsible for making sure that communication is happening.

How did Interlochen influence you? What was most memorable about your Interlochen experiences?
Interlochen had a profound impact on me. My experience at Camp came at a point in my life where I was really struggling in school, and Interlochen provided an outlet to see a future that was a positive one.

I remember going to the practice rooms with my cabin mates and people who were in the show with me, and we would all just collectively sing or share the various art we were working on.

There was a day when we were waiting in the rehearsal room for our teachers to show up. There was a piano there, and I remember Cedric Berry starting to play “El Shaddai.” We all just sat and listened. I remember how completely moved I was, realizing how incredibly talented people can be and thinking, “I cannot wait to see what happens to this young man.”

The access students have to the concerts and special events at Interlochen is incredible. I remember watching Sarah Vaughan perform live in Kresge. I’d never seen her before, and I was a huge fan. She did an encore, and she asked, “what does everyone want me to sing?” And we kept screaming, “‘Send In the Clowns’, ‘Send in the Clowns’!” She ended up singing that song.

One of the aspects of Interlochen that I love is the idea of equality amongst many. Interlochen has a great respect for all the different mediums, which I remember distinctly from my Camp experience. There was also the idea of the uniforms, and the community that they cultivated. At Interlochen, I was very present to the idea that art is made through community. Even now, I meet people and we connect because Interlochen links us, even if we weren’t campers at the same time.

The theatre industry has been a leader in masking requirements and vaccine mandates. Have you been part of these developments? How have you helped orchestrate Broadway’s return?
I think all of us have shared one goal: to get back as soon as we can, keeping in mind the safety of those onstage and in our audience. That has been the guiding principle since March 13, 2020. I’ve been involved in many industry conversations, as well as conversations within my company about how we do that.

It was incredible to return to the theatre and to witness performers hearing the response of a live audience. I was sitting with people who were all masked, and very happy to be there, and feeling very safe. We were all celebrating that we were back in a theatre, witnessing a live performance.

What upcoming projects are you most excited about?
On Sept. 17 we will welcome audiences back with David Byrne’s American Utopia, which is a show that I’m producing with my producing partner, Mike Isaacson, and Patrick Catullo. American Utopia is up for an Emmy Award for the HBO film that was directed by Spike Lee—we’ll find out if it wins on Sept. 19. It’s also receiving a special Tony Award on Sept. 26.

My next project, Plaza Suite, starring Sarah Jessica Parker and Matthew Broderick, is coming to the Hudson Theatre in February 2022.

What advice would you give young artists pursuing careers in theatre?
First, dream big. Second, failure is part of the journey. Embrace it, and then move on. I believe that if you want a life in the theatre, you can create it. It might not look exactly as you envisioned it when you were 11, 12, or 13. But you will find the path if you keep going.