Animator-in-Residence Bailey Sitton’s fantasy series is a reflection of her own personal and professional growth. 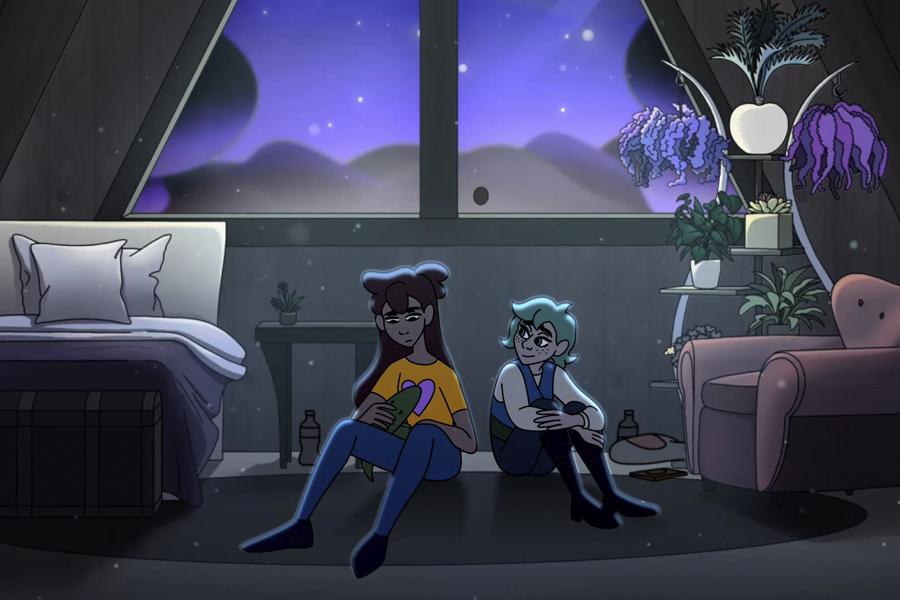 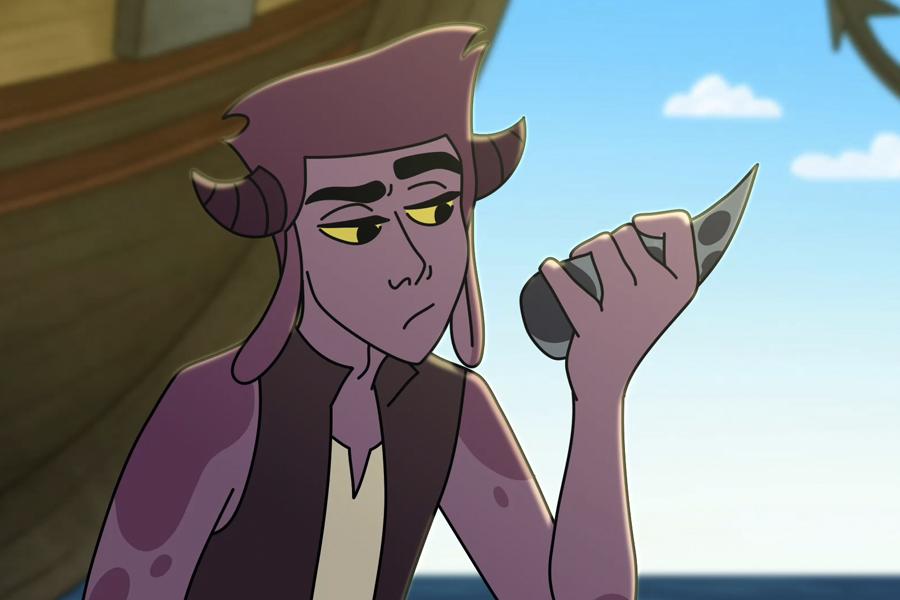 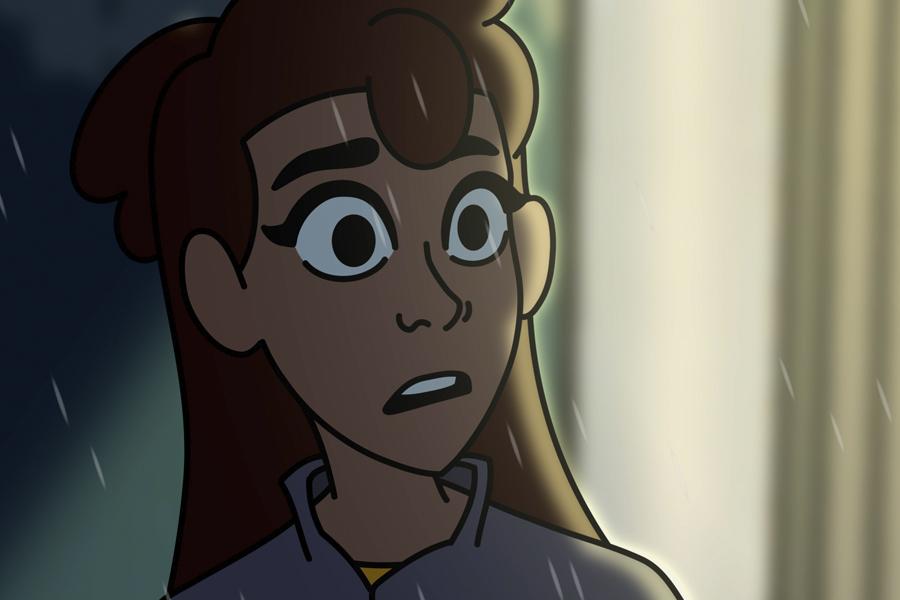 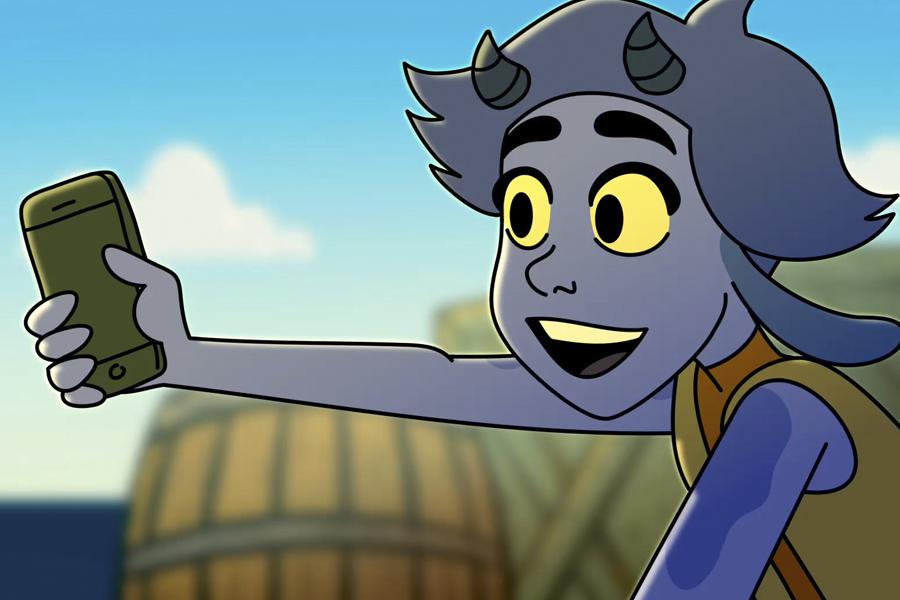 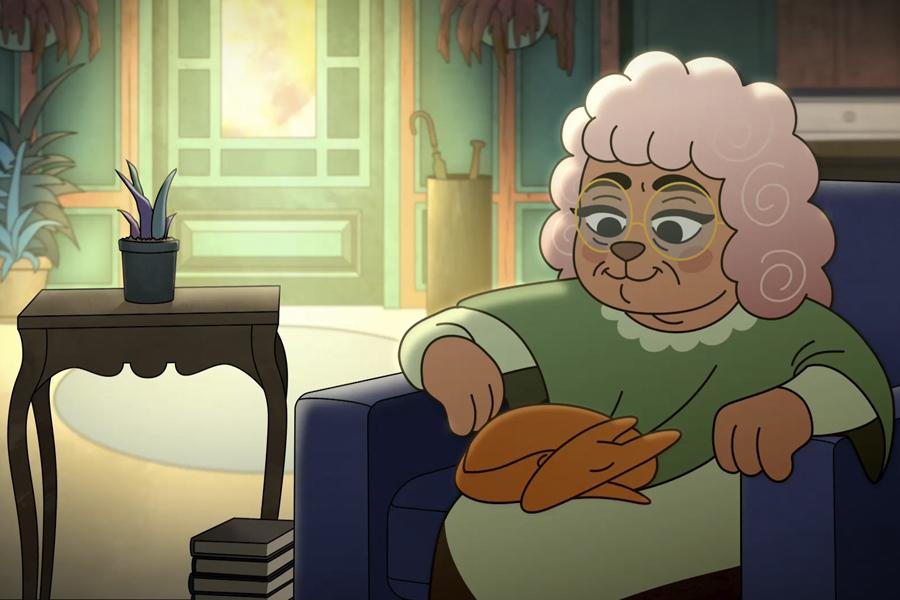 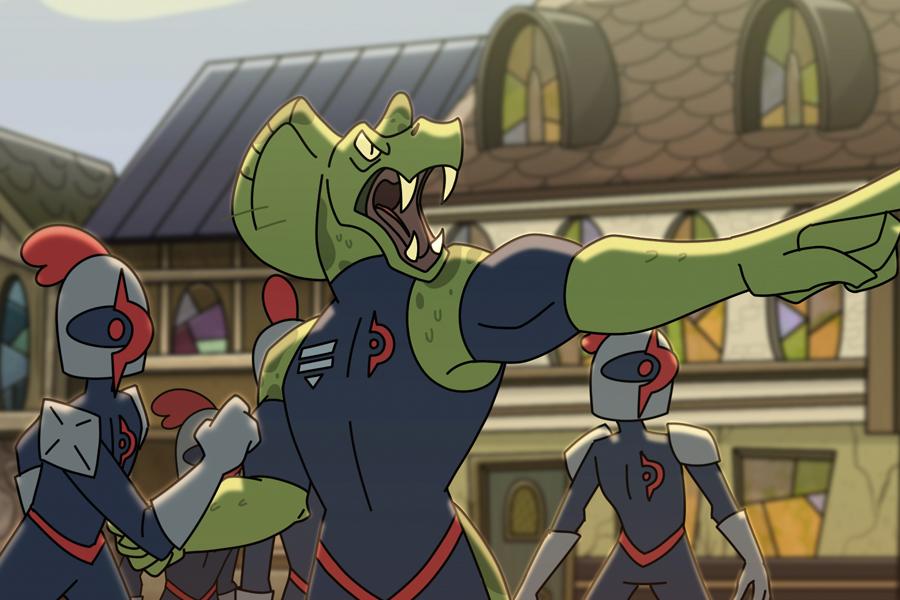 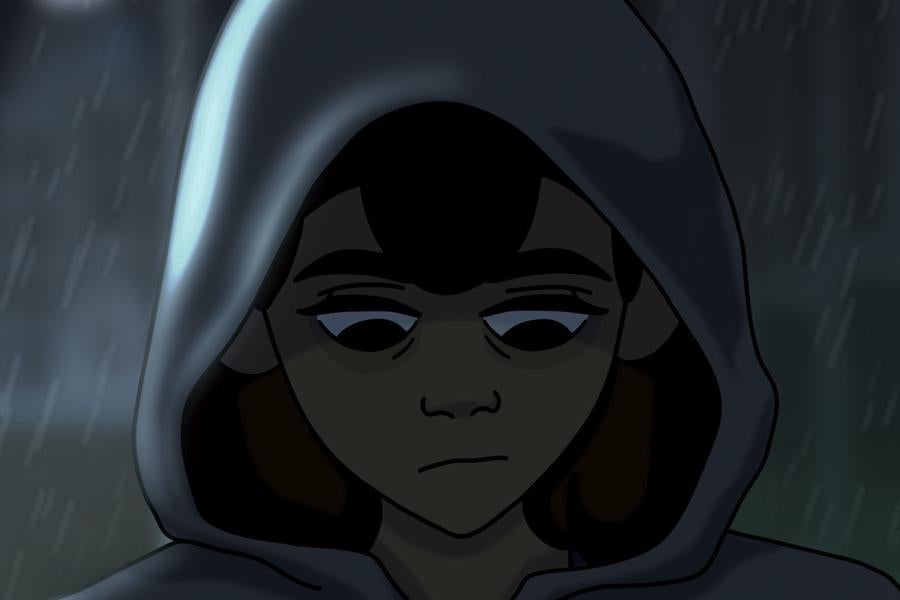 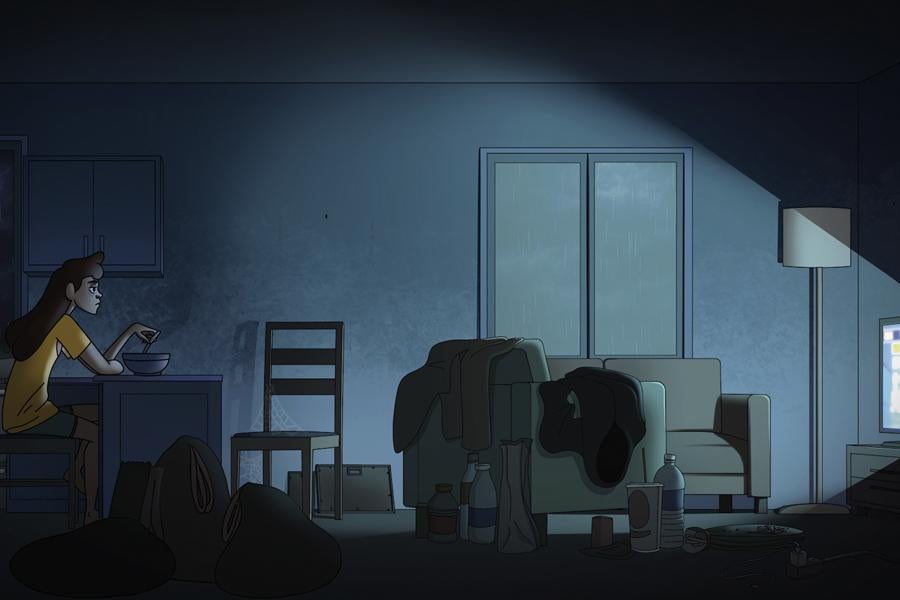 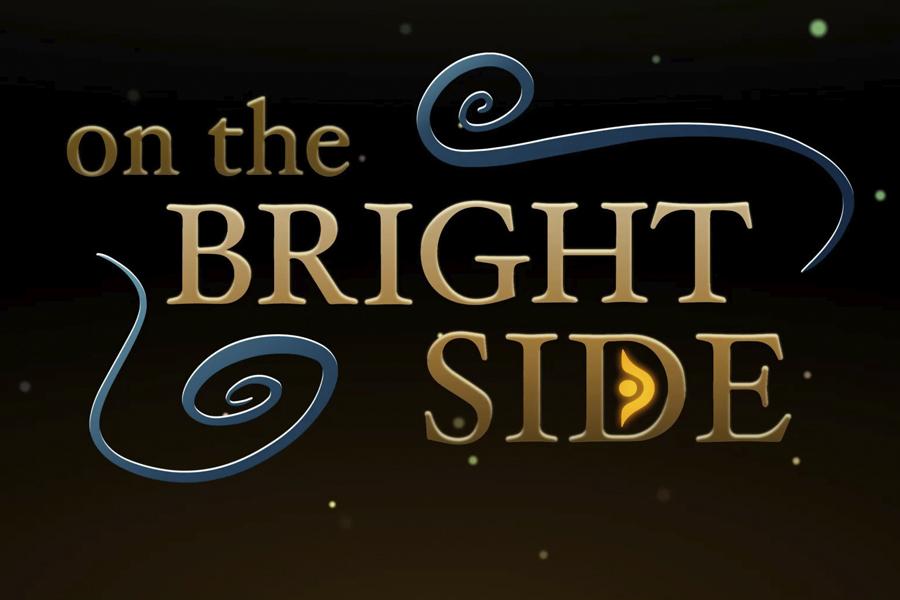 The recent University of North Georgia graduate is used to exploring all aspects of a creative project and squeezing everything she can out of her experiences. And Interlochen is the perfect place to do so.

Sitton spends weekdays teaching three different courses in the Film & New Media department. On weekends and in her free time, she’s chipping away at her latest animation project—On the Bright Side—from her own studio, Sitton Animation.

“I’m not going to wait around for someone to come and give me approval or tell me ‘You probably have the skills. You can do it.’ I don't want to wait for life. I'm just going to go ahead and do it,” she says. “I hope more than anything that my students feel empowered to say that they want to do a project and they can do it regardless of what life is pushing on them.”

The animated mystery adventure series is set in the fantasy world of Desiderium and follows the disappearance of Jobe Emerson, 17-year-old Stella’s father. She finds herself trapped in the new world and must work with a stranger—a mage named Esme—to get back home.

Sitton plans for the trailer to be out soon before moving onto the pilot and the rest of the series, which will be available on YouTube.

A community of collaboration

Sitton first started at Interlochen as a summer camp counselor in 2019 before joining as a camp Intermediate Animation instructor in summer 2021.

“I had a wonderful group of kids who were so ambitious, it kind of blew me away,” she says about this past summer. “I was able to teach them a lot very quickly because they were so invested and engaged.”

The middle schoolers were such quick studies that they learned the industry standard software Toon Boom and made a full, short film in just two weeks.

As Sitton transitioned from college to her summer camp instruction, she knew that she needed to hone her writing skills. Burnt out from her recent college animation projects, she spent the summer creating the bones of On the Bright Side as a graphic novel. Struggling to adapt to comic art, her partner encouraged her to instead embrace her life’s focus and pivot back into animation.

She developed a short script and created a rough animatic of a trailer, but—as often happens in the creative process—it still wasn’t there. In Sitton’s own words, it flopped.

However, when she found out that she received the residency position, she was thrilled to lean on, seek out, and utilize Interlochen’s vast multidisciplinary network and resources.

Screenwriting instructor Lesley Tye offered input with the script, and with her help, Bailey was able to get the script published with The Writer’s Guild of America, East. Acting instructor Laura Mittelstaedt voiced the character of Beatrice, offered tips on how to direct actors for voice recordings, and notified students about auditions. Director of Music Production & Engineering Marc Lacuesta invited her to visit class during their ambient music module to listen to student performances and select student work for the series.

Not only are the instructors from across diverse disciplines, but so are the students involved.

Stockton is leaning heavily into her orchestral roots while also adding new age influences with a heavy emphasis on strings. The final tone is a mood that’s mysterious, fantastical, and whimsical.

“It’s incredible that I get to do this,” Stockton says about having this pre-collegiate, valuable experience.

This fall, she’s off to Indiana University Jacobs School of Music to major in audio engineering and feels prepared after using her time at Interlochen to explore both the artistic and technical sides of sound recording.

Visual Arts junior Juliette Murphy, 16, voices Esme. Though focusing on ceramics and digital painting this semester with an overall interest in architecture, she took Bailey’s animation class last semester and developed an interest in the art form. In fact, leading up to her senior thesis, she plans on incorporating animation into the overall project. While the thesis itself is still being formed, she finds herself drawn to storytelling and creating different worlds.

Her close friend, junior Popular Performance Voice major, Edili Dormeville, 17, plays the character of Stella. The two often encourage each other to audition for various projects—including this one.

Dormeville is drawn to jazz, especially the Haitian influences from her father. Born in Ethiopia, she’s noticed that music from home helps her connect with the place, even when she’s many miles away. Although she’s no stranger to using her voice artistically, she’s never done voice acting before.

“Bailey made it so easy and so fun,” she says. “She also gave us the opportunity to put our own influences and touches into it, too.”

Dormeville has been working on projecting her voice when she sings, and noticed how voice acting has helped further develop that skill.

“I found something new that I really enjoy,” Dormeville says. “I love adding new talents to what I have. I love learning new things.”

On the Bright Side is an amalgamation of the successes, failures, and growth from various class projects throughout Sitton’s college career to her transition into post-collegiate life. However, at its core, it is a love letter to her partner August Ricker.

Stella is an exaggerated version of Ricker—compassionate, funny, and bullheaded. They do things with the right intentions, but can lack caution and planning. Esme is a version of Sitton when she was living with her family. She’s over cautious, nervous, and keeps to herself.

As the piece moves beyond the trailer and into the full series, Sitton views On the Bright Side as a reflection of her own personal struggles with grief and loss—coming out, friendships, community, passing of loved ones, COVID, and more.

Sitton grew up in the conservative, Christian South. Now openly out as queer and living with her partner, she feels as though she’s finally comfortable in herself and her surroundings.

“I'm hoping that for people like me, the series will be a comforting reflection of their own growth, but I'm also hoping that my extended family will watch this and kind of reflect on their own opinions of people,” she says.

The series will illustrate a metaphor focusing on anti-LGBTQ environments and the importance of a found family and created community. Hoping it will illuminate intolerances that are happening currently, Sitton is also creating a political unrest plotline focusing on the hunt for magical people.

Ultimately, Sitton hopes to tap into the resilience that she personally sees everyday in her partner.

“I’ve always admired how they keep their head up after being beaten down. So in the end, it’s a story of hope, because I see it next to me everyday in them.” 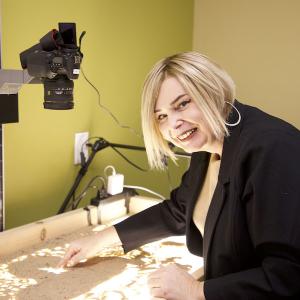 The artist’s eye: a conversation with Briana Yarhouse, Interlochen’s Director of Animation