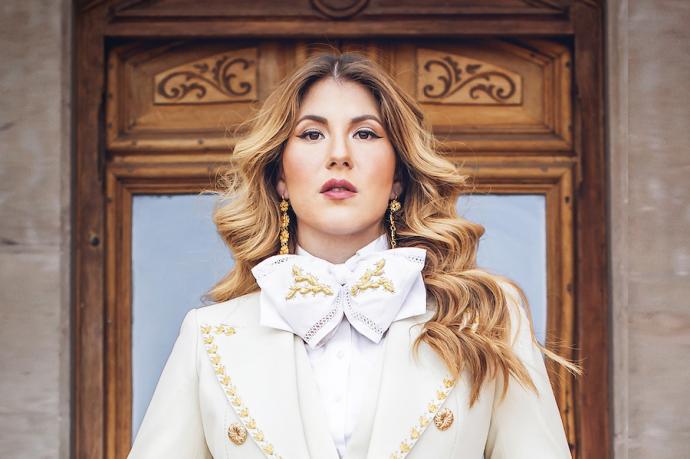 Interlochen Arts Academy alumna Nora González (IAA 10-11) was nominated for two 2021 Latin Grammy Awards and will perform at the Nov. 18 premiere event in Las Vegas. The ceremony, which honors Latin music released between June 1, 2020 and May 31, 2021, will air live on Univision at 8 p.m. ET.

Originally from Parral, Chihuahua, González has performed at festivals around the world including Starlite in Marbella, Spain, and the Lunario Del Auditorio Nacional in Mexico City. She is the first artist supported by the Instituto Mexicano del Mariachi and she serves as the official voice of the Mexican Embassy in Boston. González earned her undergraduate degree from Berklee College of Music.

González was nominated for Latin Grammys in two categories, “Best Ranchera / Mariachi Music Album” and “Best Regional Mexican Song.” Here, she reflects on her upcoming performance, the responsibility she feels to perform mariachi music, and her formative experience at Interlochen.

Tell us about the song you’ll be performing at the Latin Grammy Awards, “Cicatrices.”
It is a very important song to me that was written as a school project by my friend Pepe Portilla back in college. We recorded it at his apartment with a sock on the microphone. Pepe and I never thought that this song was going to be professionally recorded, much less recognized by the Latin Grammys! It’s a duet I’ll be performing with the amazing Lupita Infante.

Your first album, “#Charramillennial - Lady,” was nominated for “Best Ranchera / Mariachi Music Album.” What does it mean to you to be able to help revive mariachi music?
Mariachi music to me is the most beautiful and elegant music in the world, and it is a privilege to be able to sing it and to be Mexican. It is also a responsibility. I think it is very important to put our music back on the map for new generations.

How did Interlochen influence your artistic journey?
Interlochen gave me so many tools for the “real world.” Thanks to Interlochen, I took music seriously, and began considering it as a profession. Before being a postgraduate student at Interlochen, I used to think that music was only a hobby. Then I met my teachers and classmates, and they were all so talented and dedicated. I remember everyone applying to their colleges and talking about it at Stone Cafeteria, and I was like “you know what? I’m gonna do it. I’ll be a musician.” The friends I made at Interlochen are still my best friends, and my classmates are the most talented people I’ve ever met.

What’s next for you?
After the Latin Grammys, I have a tour in Spain, then a concert in the Ukraine, and later on I’ll be recording my second album.