Cristian Măcelaru and the WDR Sinfonieorchester to join Interlochen Online

The Grammy Award-winning conductor will mentor young artists at Interlochen's virtual arts camp this summer with musicians from one of Europe's top orchestras and will lead discussions with six distinguished artists. 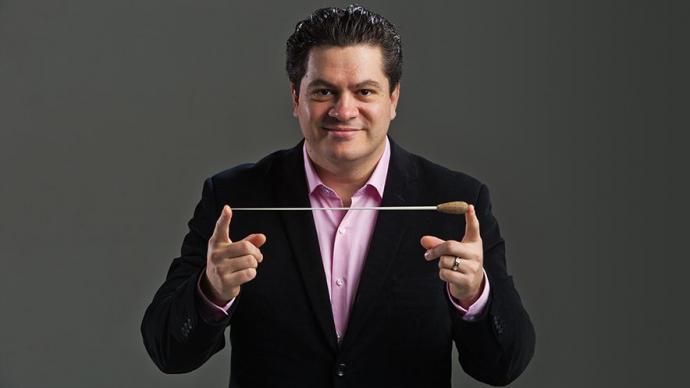 Building on his long and meaningful history with Interlochen Center for the Arts, Cristian Măcelaru will guide and inspire young musicians this summer as part of Interlochen Online’s virtual arts camp, which will take place from June 28 to July 19, 2020.

“Cristi has an uncanny ability to energize and inspire our emerging young musicians,” said Trey Devey, President of Interlochen Center for the Arts. “We are grateful for his leadership and thrilled that he will join us for Interlochen Online this summer.”

“Interlochen set me on the path to create a life in the arts,” Măcelaru said. “It is a privilege to be able to help inspire the next generation of artists to follow their dreams and fulfill their potential, especially during this challenging time.”

Under Măcelaru’s leadership, the string section of the WDR Sinfonieorchester, one of Europe’s leading orchestras, will record the Final movement of Beethoven’s Symphony No. 5 for Interlochen students to listen to and practice along with, to enhance their study of the work. Additionally, Măcelaru will conduct students in a virtual performance of “Les Préludes,” a sweeping orchestral work by Franz Liszt that has marked the conclusion of the Interlochen Arts Camp season since 1928.

Additional distinguished guest musicians who will be part of Interlochen Online this summer include Martin Chalifour, Concertmaster of the Los Angeles Philharmonic, members of the Detroit Symphony Orchestra, and many others.

To learn more about and apply to Interlochen Online’s camp programs, visit interlochen.org/online.

About Cristian Măcelaru
After graduating from the Interlochen Arts Academy in 1999, Măcelaru attended the University of Miami in Florida and Rice University in Houston, where he studied conducting with Larry Rachleff. He then deepened his knowledge at Tanglewood Music Center and Aspen Music Festival in masterclasses with David Zinman, Rafael Frühbeck de Burgos, Oliver Knussen, and Stefan Asbury.

Măcelaru first attracted international attention in 2012, when he conducted the Chicago Symphony Orchestra, stepping in for Pierre Boulez. In the same year, he received the Solti Emerging Conductor Award for young conductors, followed in 2014 by the Solti Conducting Award. Since then, he is in great demand in North America and Europe as a guest conductor with leading orchestras and festivals. He is the Music Director of the Orchestre National de France, Chief Conductor of the WDR Sinfonieorchester, Music Director of the Cabrillo Festival of Contemporary Music, and Artistic Director and Principal Conductor of the World Youth Symphony Orchestra at Interlochen Arts Camp.

About the WDR Sinfonieorchester
The WDR Sinfonieorchester is one of Germany’s most renowned orchestras. Based in Cologne, it shapes the musical landscape of North Rhine-Westphalia in a special way: through its concert series in the Cologne Philharmonic, through partnerships with the major concert halls and festivals in the region, with concert broadcasts on television, radio and livestream, as well as with its digital projects.

International tours and the growing number of award-winning CD productions are attracting a great deal of attention both nationally and internationally. With diverse projects for children and teenagers, as well as school concerts throughout North Rhine-Westphalia, the WDR Sinfonieorchester makes an important contribution to cultural education.