The musician, entrepreneur, author, and University of Michigan professor will deliver the address during the school’s virtual commencement ceremony. 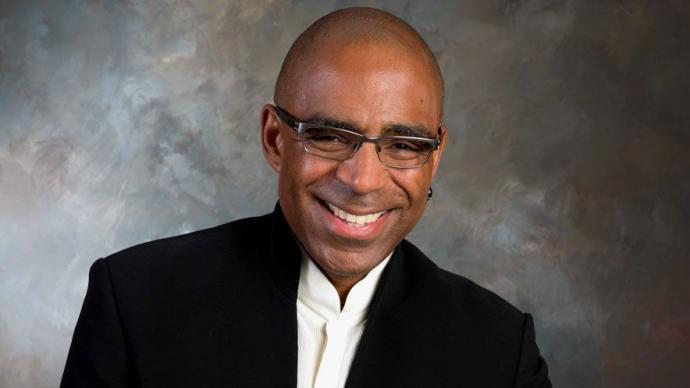 Interlochen Center for the Arts is excited to announce that alumnus Aaron Dworkin (IAA 86-88) will deliver the commencement address to the Interlochen Arts Academy Class of 2020.

Dworkin, a social entrepreneur, performing artist, philanthropist, author, and University of Michigan professor, will present the address via pre-recorded video during the Academy’s virtual commencement ceremony. The ceremony will be streamed live on Saturday, May 23 at 12 p.m. EDT.

Dworkin studied violin at Interlochen Arts Academy, going on to receive bachelor’s and master’s degrees in violin performance from the University of Michigan. In 1996, Dworkin founded the Sphinx Organization to promote diversity in classical music through competitions, education, and financial support. From July 2015 to April 2017, Dworkin served as the dean of the University of Michigan’s School of Music, Theatre, & Dance (SMTD). Dworkin continues at the University as a tenured professor in both the School of Music, Theatre & Dance and Stephen M. Ross School of Business, and maintains an active schedule as a spoken word performing artist and keynote speaker. He was a 2005 MacArthur fellow, President Obama’s first appointment to the National Council on the Arts, and a member of the Michigan Council for Arts and Cultural Affairs.

“In these challenging times, it is more important than ever for our students to see how their art can make a difference in the world,” said Interlochen Arts Academy Provost Camille Colatosti. “In Aaron Dworkin, our students will find a perfect example of the principles of citizen artistry and arts leadership that we have sought to instill in them while at Interlochen. It is my hope that he inspires them to go forth and use their skills for the good of their communities.”

Named a 2005 MacArthur Fellow, President Obama’s first appointment to the National Council on the Arts and Governor Snyder’s appointment to the Michigan Council for Arts & Cultural Affairs, Aaron P. Dworkin served as dean of the University of Michigan’s School of Music, Theatre & Dance (SMTD), which is ranked among the top performing arts schools in the nation. He is currently a tenured full professor of arts leadership and entrepreneurship at SMTD as well as serving as a Professor of Entrepreneurial Studies at the Stephen M. Ross School of Business at the University of Michigan. In addition, Dworkin is a successful social entrepreneur having founded The Sphinx Organization, the leading arts organization with the mission of transforming lives through the power of diversity in the arts. He also serves as host of the nationally-broadcast Arts Engines show in collaboration with Detroit Public Television and is co-founder of SonoGrub.com, a weekly blog pairing great food and music. As a best-selling writer, Dworkin has authored “The Entrepreneurial Artist: Lessons from Highly Successful Creatives,” published by Rowman & Littlefield; a science-fiction novel, “Ethos: Rise of Malcolm,” published by MorganJames; a memoir titled “Uncommon Rhythm: A Black, White, Jewish, Jehovah’s Witness, Irish Catholic Adoptee’s Journey to Leadership,” released through Aquarius Press; a poetry collection, “They Said I Wasn’t Really Black”; and a children’s book, “The 1st Adventure of Chilli Pepperz.” A lifelong musician, Dworkin is a prominent spoken-word performing artist represented by Cadenza Artists with a current national tour of his American Rhapsody with a national consortium of orchestras and premiered with the Minnesota Orchestra and Maestro Osmo Vänskä. He has collaborated with a breadth of artists including Yo-Yo Ma, Damien Sneed, Anna Deveare Smith, Damian Woetzel, Lil Buck and others. His visual digital art project, Fractured History, has been exhibited at multiple galleries and museums to rave reviews. He recorded and produced two CDs, titled Ebony Rhythm and Bar-Talk, in addition to writing, producing, and directing the independent film Deliberation.

A multi-media performing artist, author, social entrepreneur, artist-citizen, and educator, Dworkin continually receives extensive national recognition for his leadership and service to communities. He has been featured in People Magazine, on NBC’s Today Show and Nightly News, CNN, NPR’s The Story and Performance Today. He has been the subject of articles in The New York Times, Chicago Tribune, Detroit News, Detroit Free Press, Washington Post, Chronicle of Philanthropy, Emerge and Jet Magazines, and many other media outlets, and was named one of Newsweek’s “15 People Who Make America Great.” He is the recipient of the Royal Philharmonic Society Honorary Membership, Harvard University’s Vosgerchian Teaching Award, National Governors Association 2005 Distinguished Service to State Government Award, Detroit Symphony Orchestra’s 2007 Lifetime Achievement Award, Detroit News’s 2003 Michiganian of the Year Award, Crain’s 40 Under 40 and Who’s Who Awards, BET’s History Makers in the Making Award, AT&T Excellence in Education Award, and National Black MBA’s Entrepreneur of The Year.

As an artist curator, he has served as a juror for some of the most prestigious international competitions including the Menuhin Competition, London Music Masters Competition, Stulberg International Violin Competition, and the Sphinx Competition. A sought-after global thought leader and a passionate advocate for excellence in arts education, entrepreneurship, and leadership, as well as inclusion in the performing arts, Dworkin is a frequent keynote speaker and lecturer at numerous national and global arts, creativity and technology conferences including the Aspen Ideas Conference, Independent Sector, Americans for the Arts, Dance USA, Leadership Africa Summit, The League of American Orchestras, National Association for Schools of Music, Merit Member Conference, Society for Music Teacher Education, National Guild for Community Schools of the Arts, National Association of Music Merchants, Chautauqua Institution, National Suzuki Association, American String Teachers Association, Ithaca College, and the National Association for Negro Musicians. He served as commencement speaker at the Curtis Institute of Music, University of Michigan, Longy Conservatory and twice for Bowling Green State University. In May of 2013, the renowned Curtis Institute of Music awarded Honorary Doctorates to Dworkin and Sir Simon Rattle, longtime maestro of the Berlin Philharmonic. Dworkin also holds bachelor’s and master’s degrees in violin performance from the University of Michigan.

Dworkin personifies arts leadership, entrepreneurship and community commitment with an unwavering passion for the arts, diversity, and their role in society. As dean of the University of Michigan’s School of Music, Theatre & Dance, he led a world-class faculty of 180 and a staff of 100 while administering a budget over $60 million, an endowment in excess of $140 million and successfully completing a capital campaign over $90 million. As founder of the Sphinx Organization, Dworkin created an international organization with a staff and faculty of over 50 and a budget of $5 million that awards more than $1,000,000 in prizes and scholarships annually. The organization serves as the leading advocate for young people and diversity in the arts worldwide. Dworkin also founded and served as publisher and editor-in-chief of The Bard, a literary magazine reaching over 60,000 readers.

Dworkin serves regularly as a board or advisory member for numerous influential arts organizations including the National Council on the Arts, Michigan Council for Arts and Cultural Affairs, National Association of Performing Arts Presenters, the Avery Fisher Artist Program, Independent Sector’s Advisory Group, League of American Orchestras, National Society for the Gifted and Talented, Creative Many Michigan, the Knight Foundation, The Ann Arbor Area Community Foundation, The Michigan Theater, Rachel Elizabeth Barton Foundation, Editorial Board of Downtown New York Magazine, and Chamber Music America. As the co-chair of the Arts and Cultural Education Task Force for the State of Michigan, Dworkin designed the required arts curriculum for Michigan schools.

Dworkin has strong interests in politics, innovation, creativity, human pair bonding, and issues of economic and social justice. In addition to various genres of music and disciplines of the performing arts, he enjoys travel, movies, and the culinary arts. He is married to Afa Sadykhly Dworkin, a prominent international arts leader who serves as President and Artistic Director of the Sphinx Organization and has two awesome sons, Noah Still and Amani Jaise.