From violin to vinyasa with Melissa White

Harlem String Quartet violinist Melissa White uses yoga to help musicians find strength and balance on and off the stage. 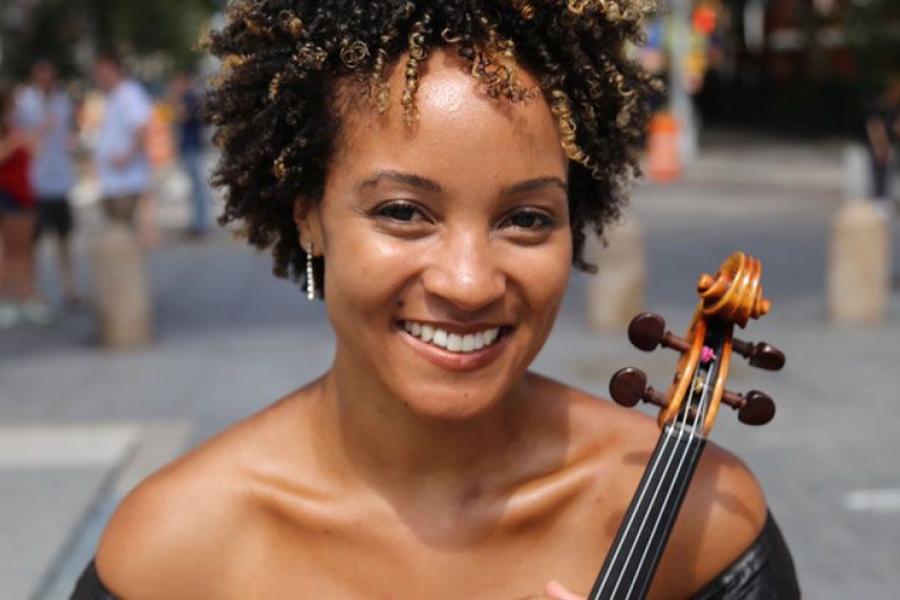 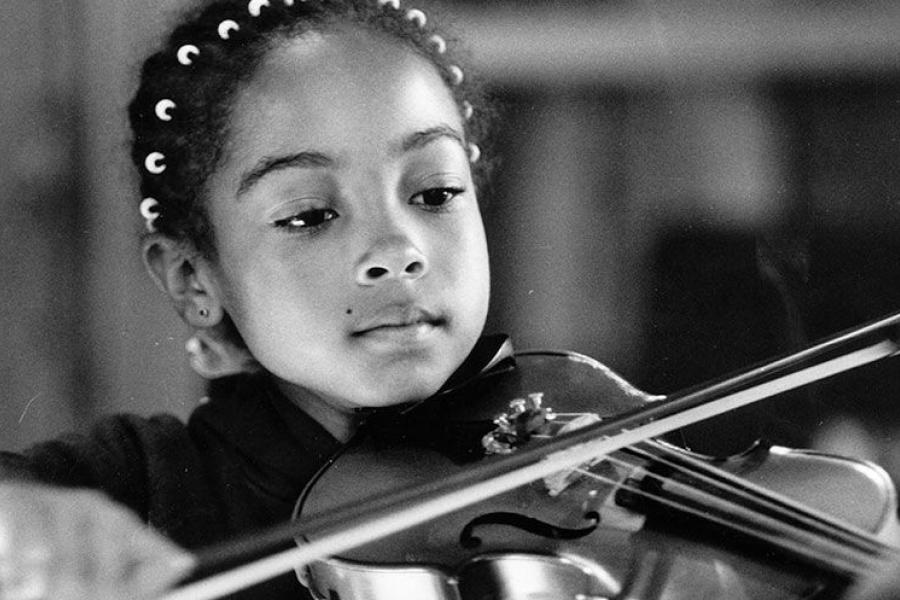 White at Interlochen Arts Camp in 1993.

Instead, she began noticing improvements not only in her physical strength, but also in music-making.

White, a violinist with the Harlem String Quartet, would go on to co-found Intermission, a program designed to encourage unity of mind, body, spirit, and music-making through yoga and meditation. This January, White returned to Interlochen to bring Intermission to Arts Academy musicians—and to revisit the place where her musical journey began.

White, like many musicians, first encountered her instrument on children’s programming. “It was just another day watching Sesame Street,” she said. “I was four, and Itzhak Perlman was the guest.”

Unlike other future virtuosos, however, White wasn’t attracted to the sound or appearance of the violin. “I just liked the way his chin fit so perfectly into the chinrest,” she said. “I thought, ‘that looks like the perfect instrument to play. I should play this.’” White asked her mother for a violin, and after two years of persistent pleading, her mother relented.

From those first lessons at age six, White progressed quickly. She spent the summers of 1993 and 1994 at Interlochen Arts Camp, where she studied with Hal Grossman. By age 11, she had progressed beyond the capacities of violin teachers in her native Lansing. White and her mother would spend the next four years making the weekly commute to Chicago or Oberlin for violin lessons.

But in White’s sophomore year of high school, a change in her mother’s career put an end to the weekly lessons. Frustrated by the lack of tutelage, White stopped practicing.

White’s budding career as a violinist might have ended there if not for her mother’s influence. “One day my mom said to me, ‘So are you not a violinist anymore?’” she said. “I started to question how I felt about not having the violin as part of my life, and I realized how important it was to me.”

Recommitted to studying the instrument, White began to search for a way to take lessons more regularly and rediscovered Interlochen. “In the back of our heads, my mom and I always knew Interlochen was a great institution with great education and a supportive environment,” she said. White also reconnected with Grossman, who was on faculty at the Academy. “He reminded me that as a junior, he had taught me on his knees because I was so little,” White said with a smile. “We still have a relationship today.”

As a junior at Interlochen Arts Academy, White won first prize in the junior division of the 2001 Sphinx Competition. As a Sphinx Laureate, White earned a cash prize and solo appearances with major United States orchestras. Her relationship with Sphinx deepened when, in 2006, the organization invited her to join the Harlem String Quartet as one of its founding members.

“The Sphinx Organization had gotten a grant from Target to do some work in Harlem, and needed a string quartet to go into public schools and present music,” White explained. “They wanted the quartet to be made of first-prize winners of their competition, so I came together with three other Sphinx winners to form the Harlem String Quartet.”

White and the Harlem String Quartet began performing, with venues ranging from the nation’s top concert halls to Harlem-area public schools. While making their Carnegie Hall debut, the quartet was spotted by a manager, who added the quartet to his roster and began booking additional shows for the ensemble. Within a few years, the quartet was White’s full-time job.

White also performs around the nation as a violin soloist. She recently performed the violin solos for the soundtrack of Jordan Peele's 2019 horror film, Us.

While White’s career was blossoming, her interest in yoga was also growing. Although White had tried yoga in the past, it wasn’t until she was introduced to the bikram style that the practice took hold.

As her interest in yoga developed, White reconnected with fellow Sphinx laureate Elena Urioste. The two violinists discovered that they both shared a newfound interest in yoga. “We started talking about how we physically felt more balanced, and how techniques such as focusing, using your breath to calm your heart rate down, and being able to practice self-compassion were applicable to our violin playing,” White said. “We thought, ‘How amazing would it have been to have this sort of philosophy as younger people?’”

White and Urioste began discussing ways they could share the benefits of yoga and mindfulness with other musicians. The result of these conversations was the first-ever Intermission Retreat for professional musicians.

The Intermission Retreat is a weeklong getaway for professional musicians. Each day begins and ends with yoga classes, with free time in between for practicing, composing, and touring the area around the retreat’s venue. Each evening, participants gather for a communal dinner and “share time.”

“The Retreat has created this community of beautiful souls, which is what surprised us most,” White said. “We didn’t know who was going to come. It’s been a vast group of people, from people with zero yoga experience to those just finishing training to become yoga instructors. Most are working professional musicians. It’s a safe place to talk about so many things that we go through as musicians but don’t talk about, like getting nervous or working through injury.”

It’s that sense of community that White appreciated about her time at Interlochen—and still does. “The two years I spent at Academy were two of the best years of my life,” She said. “It’s so inspiring to be back at Interlochen and see that the community is still filled with creative, inspired young people and supportive faculty and staff.”

And this time around, White has the extra joy of sharing not only her passion for music, but also her passion for yoga, with the next generation of Interlochen students. “I can’t put into words how heartwarming it feels to bring Intermission to Interlochen,” White said. “It’s a beautiful thing to see that wellness is a topic that’s being talked about and acted out here.”

“To come home to Interlochen and bring Intermissions with me is a dream come true.”