Interlochen Public Radio’s music director discusses her book, her musical birthday buddies, and the challenges of profiling a private subject. 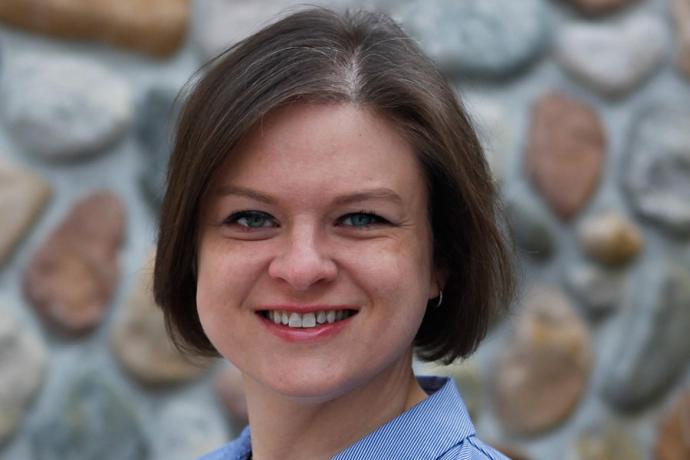 “I always wanted to come back to [Switched-On Bach] one day,” Sewell said in a recent interview.

In 2014, after completing her dissertation, Sewell was finally ready to return to Switched-On Bach. But as Sewell contemplated how to contextualize the album for her readers, she realized just how little had been written about the work’s composer. Intrigued, Sewell decided to pivot her project from a listener’s guide to a biography.

Six years later, in September 2020, Sewell published “Wendy Carlos: A Biography” through Oxford University Press. The book was an immediate success, garnering favorable reviews from The Nation, Wall Street Journal, and the Washington Post; the latter also made the book one of their five classical music recommendations for September 2020. Sewell was also invited to appear as a guest on WBEZ Chicago’s nationally distributed radio show Sound Opinions.

Sewell is no stranger to the microphone—or musicology. She is currently the music director of Interlochen Public Radio’s Classical IPR and serves as the host and producer of its popular program The Interlochen Collection. Sewell earned her Ph.D. in musicology from Indiana University with additional studies at Butler University and Bowling Green State University.

We caught up with Sewell to learn more about her background in musicology, unconventional research process, and her passion for Carlos and her music.

How did you develop your interest in musicology?
I started college as a music education major, because when I went to college, all I knew you could do with a music degree was teach high school music. In college, I learned that there were many things one could do in music, and I fell in love with musicology. I had one particular professor who just brought all the music to life in context. I said, “This is what I want to do.” I had a lot of mentors along the way who helped me figure out how to take that path, recommended particular graduate programs, wrote me letters of recommendation, and made introductions. I've been very fortunate to have a lot of help.

When I was a graduate student, I wrote a paper about Carlos’ album, Switched-On Bach. I always wanted to come back to that one day. So when I finished my dissertation and was looking for my next project, I thought, “I'm going to go back to that Switched-On Bach paper.”

The more I worked on that, the more I realized that there's just nothing out there about this person who created Switched-On Bach. And so ultimately, I decided to write a biography of her first. There's bits and pieces of information out there about her, but there's nothing written about her life in a cohesive, linear way.

Tell us about your research process
Because this was the first biography anyone had ever written about her, I couldn’t start with somebody else's bibliography. I really had to start from scratch.

I emailed Wendy several times, and she never responded to me. I compiled a list of all the people she had worked with, and I emailed everyone she had worked with in the past 20 or 25 years. Most of those people ignored me, but a few people wrote back to me off-the-record to explain why they would not speak to me. I really didn’t have any new interviews for the book, so I had to rely on things she had said in the past.

I started with what she had said so I could use her own words as much as possible. I gathered as many primary sources as I could find: firsthand interviews with her and things that she had written, either public or private. That involved looking at a lot of lesser known periodicals—she gave interviews to the New York Times a couple of times, but she also did a lot of interviews with Keyboard Magazine, which is a pretty specialized periodical. I did a lot of archival research too. I went to a number of different archives, including the New York Public Library, the Library of Congress, and Cornell University Library.

What motivated you to continue with the biography despite Carlos’ resistance?
I definitely thought about the ethics of it: what does it mean to write a biography about someone who doesn’t want their biography written? But her contributions to music in the last half-century are so important that I think people need to know about her and to have information available about her and what she’s done.

I don’t think it’s an understatement to say that the sound of electronic music, and of pop music in particular, wouldn’t be the same if she had never created Switched-On Bach. It’s an interesting thing because I think she’s so important and that people need to know about her, but she doesn’t necessarily see it that way.

I feel like if I was a famous person, I would probably be private too. Her hesitance is understandable, to a certain extent.

One thing I came across so often as I was writing the book is that journalists and scholars have just really not treated her kindly. Since she disclosed her transition in 1979, people have spent way more time talking and writing about her gender than they do about her music. And I would imagine that would get incredibly frustrating, particularly when one has contributed as much to music as she has, that her innovations are completely sidestepped in favor of her gender identity.

You’ve had a lot of reviews of your book—both positive and negative, including an unfavorable review from Carlos herself. Can you share your perspective on the reactions?
I am not surprised at all by her negative reaction to my book. I've actually gotten notes from people thanking me because my book prompted her to update her website for the first time in 12 years!

Of course, as a human being, I am heartbroken that this octogenarian who I admire so much is so upset with me. As a biographer, though, her response is completely expected. It fits the context, so there's nothing particularly surprising about how she responded.

I think it would be foolish and narcissistic of me to think, “Oh, if only she read the book, then she would invite me to have tea.” Honestly, she hasn't liked anything anyone's written about her for 45 years, and I don't think my book is going to be the thing that changes that.

But there have been some really great articles as well. It's kind of amazing that it has been reviewed so positively. What’s especially interesting is that some of the reviewers are clearly people who are familiar with Wendy Carlos—some of them have even tried to contact her themselves—so they are familiar with her music, her legacy, and her resistance to journalistic inquiries. It’s been interesting reading reviews that are sort of empathetic to my book from that angle.

Were there any things that you found out about her in the course of your research that surprised you?
She's so funny. She's just brilliant and hilarious. I would laugh out loud reading some of the things she's written. She's someone I just want to have a conversation with because she's just so funny, and that humor translates into her music too. Generally, when people think of Wendy Carlos, they think of Switched-On Bach or maybe Tron or A Clockwork Orange. But her grasp of music history, styles, and composers, and her ability to parody those, is just brilliant and hilarious. I wish more people knew more about that side of her.

2020 has been quite a year for you: You welcomed your first child and published your first book. What’s next for you?
In the long term, I’m hoping to write a listener’s guide to Switched-On Bach and actually get back to the project that started this whole thing.

I started working on this book in 2014. My life and career have changed so much in that time. I went from owning my own business to running Classical IPR. I got married and had a kid. Who knows what my life will look like by the time the next book comes out?

“Wendy Carlos: A Biography” is available for purchase from Amazon, Barnes and Noble, and other booksellers.