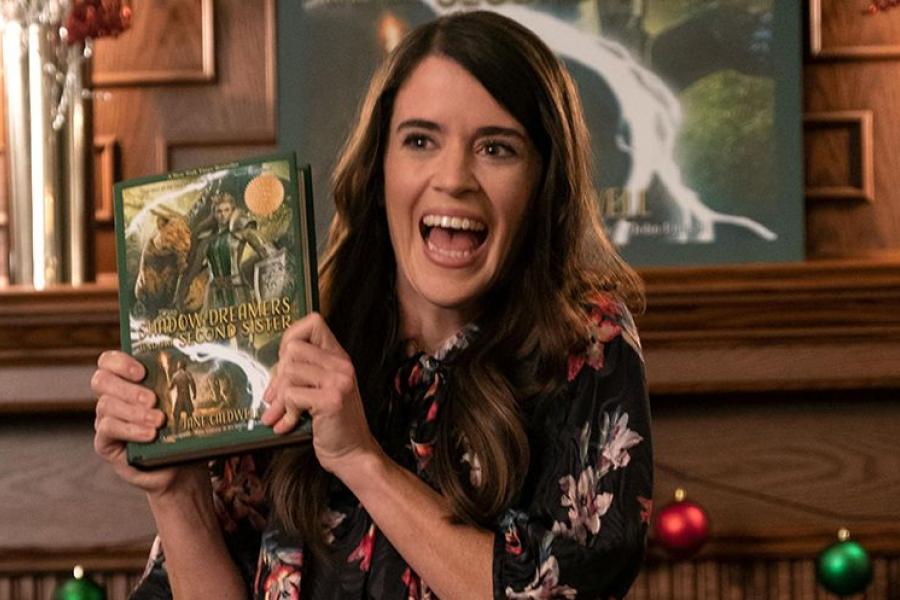 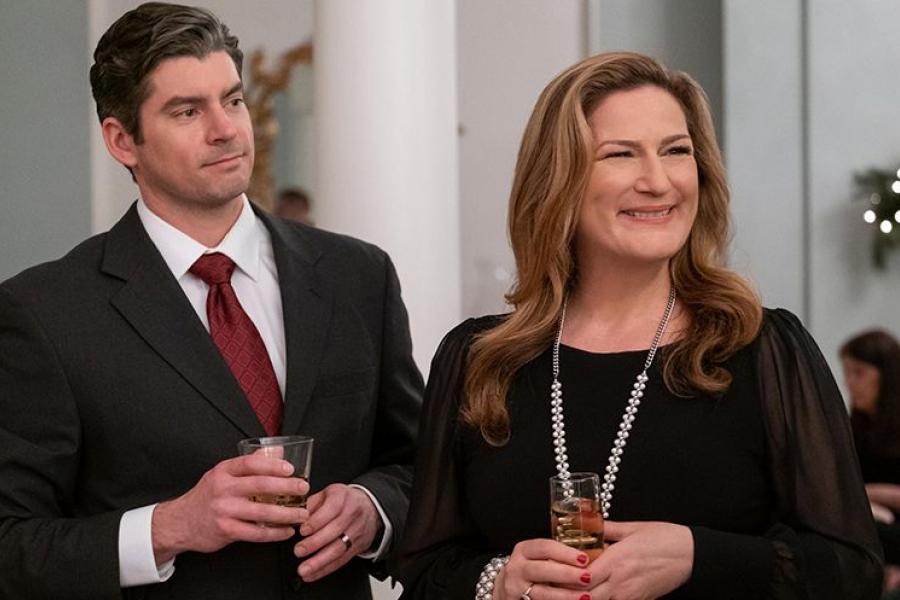 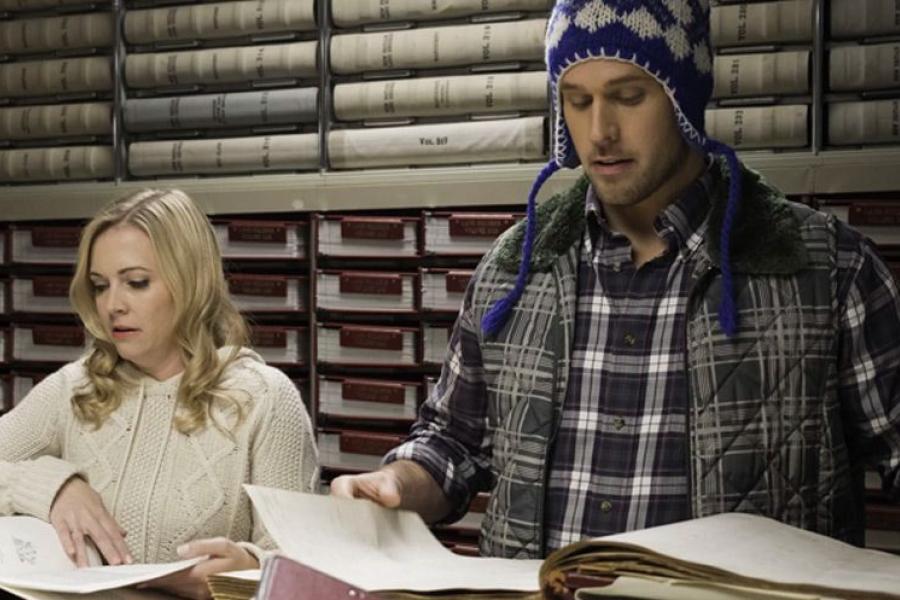 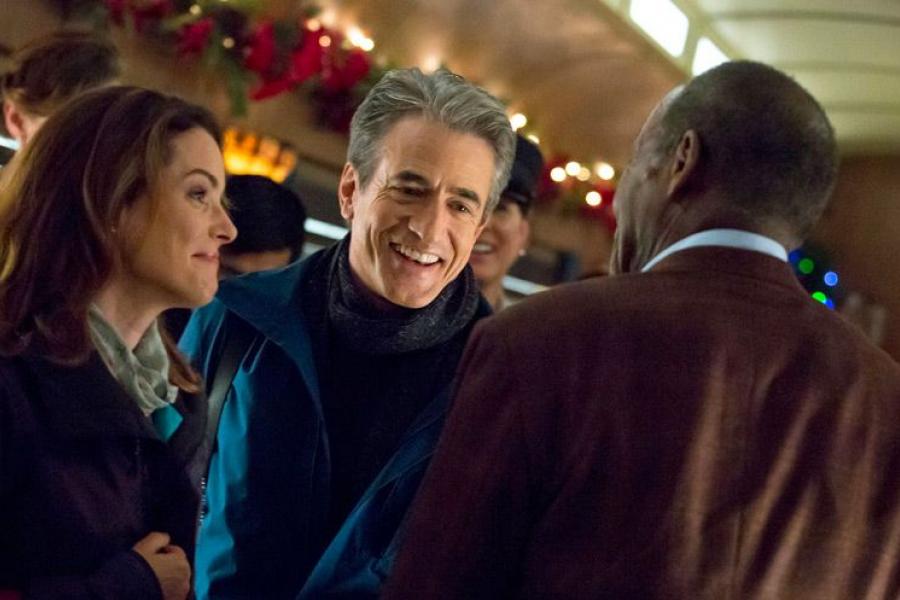 Dermot Mulroney (center) in the 2017 Hallmark movie The Christmas Train

Each December, television networks and streaming services are flooded with holiday-themed movies.

Despite the brevity of the holiday season, there is no shortage of festive films to choose from. As you’re tuning into 25-days-of-Christmas celebrations or building your own cinematic Advent calendar, keep your eyes peeled for these Interlochen Arts Camp and Arts Academy alumni.

Mary Holland (IAA 01-03)
From Veep to Curb Your Enthusiasm, Parks and Recreation, Comedy Bang! Bang!, and Brooklyn Nine-Nine, former Upright Citizens Brigade (UCB) performer Mary Holland has made a name for herself as a respected comedic actor. This holiday season, you can catch Holland and fellow Interlochen alumna Ana Gasteyer in Happiest Season on Hulu. Holland co-wrote the film with its director Clea DuVall.

Ana Gasteyer (IAC/NMC 79, 81)
Speaking of Ana Gasteyer, she may be best known for her run as a Saturday Night Live cast member, but she’s also made numerous television and film appearances since leaving the show. Last December, she joined several of her former SNL castmates for Fox’s A Christmas Story Live! She can also be seen impersonating Martha Stewart in the 2000 made-for-television movie Christmas Dream.

Meredith Baxter (IAA 63-64)
Academy alumna Meredith Baxter leads all Interlochen alumni with four holiday film credits. You can see her as Lorraine in the 2004 USA television movie Angel in the Family. She’s also Jessica Claus in Becoming Santa, Carol Boyajian in A Christmas Visitor, and Carol in Naughty or Nice.

Jaime Ray Newman (IAC 91-93, 95)
Newman’s diverse career has seen her appear in a variety of genres: soap opera, superhero, and even horror. She’s also starred in a holiday film: The 2006 made-for-television movie Under the Mistletoe.

Natalie Knepp (IAA 00-02)
A Joyous Christmas was a breakout film for Knepp, whose previous roles were primarily guest appearances on television. In the Hallmark Channel film, Knepp stars as Rachel, a self-help writer who discovers the true meaning of Christmas and family during a holiday visit to her hometown.

Felicity Huffman (IAA 79-81)
Huffman’s sole foray into the holiday genre saw her starring alongside Tim Allen, Jamie Lee Curtis, and Dan Aykroyd in Christmas with the Kranks. Based on the John Grisham novel “Skipping Christmas,” the plot centers around a family’s controversial decision not to observe the Christmas holiday.

Anthony Rapp (IAC/NMC 85-86)
Rapp’s most iconic role, both on Broadway and on the screen, is Mark in RENT. While RENT isn’t really a Christmas movie, it’s Christmas Eve/Christmas Day setting, snow, and quotations of Christmas carols offer plenty of holiday flair, all wrapped up in a bigger narrative about love in the time of AIDS. And if Die Hard can be considered a Christmas movie, why not RENT?

Bonus feature
Josh Groban (IAC 97-98) doesn’t have an acting role in The Polar Express, but his holiday anthem “Believe” is one of the film’s most magical songs. Groban added it to the tenth-anniversary edition of his best-selling Christmas album “Noel,” which was released in 2017.