The Future of Cinema: One Film Student at a Time

As Academy graduate Kira Bursky makes a splash at film festivals, Director of Film & New Media Michael Mittelstaedt reflects on his students’ past and future. 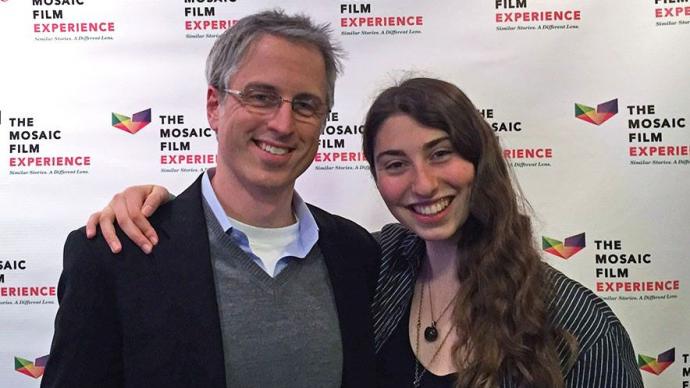 This fall, when I learned that Kira Bursky, one of my recent graduates, would be honored at the Mosaic Film Experience Festival in Grand Rapids, I decided to make the two-hour drive to see the event in person. My short visit was an awakening for me as a teacher and filmmaker. It was also a sign of what is to come for the growing Interlochen film community.

In many ways, student festival screenings follow a typical routine. The lights go down. I track through the program with the glow of my phone and eagerly anticipate when my students’ work will come up. I listen to the audience as they laugh, gasp, or sit in silence, and then I mentally meter the applause through the credits. After all of this, I think back to all the academic and creative woodshedding and ditch-digging that the student undertook to finally realize their work on the screen. The Mosaic experience, however, was more than that. It was an education for me.

When I met Kira at the theater, she bounded out and introduced me to some of the festival organizers and the founder. I also ran into Abbey Sacks, a then senior; she went on to win the festival's Rick Wilson Memorial Award for the best high school film from West Michigan and third place overall in the high school category. But after my arrival, I had the luxury of being purely an observer at the event and getting a bird’s eye view to see and enjoy the moment. It was the proud equivalent of letting go of the back of the bike.

Kira’s junior thesis film, Girly, earned her the respect of the Mosaic organizers last year and she was courted to return this year to share her body of work as a keynote speaker about creativity. The experience quickly became less about the film presentation and more about the gift of watching a former student present herself and her work to an audience of strangers, with knowledge, poise and humility.

“There is no such thing as failing,” she said. We encourage that sentiment all the time in the Film & New Media program, but it was the first time that I ever heard a current student or graduate say it without a flutter of doubt. But Kira doesn’t just say things like this - she lives it. She is a maker, a live performer, a songwriter, a musician, and a visual artist. She is the kind of “kid” you might expect to come from a place like Interlochen.

Kira receives well-deserved attention for her work at festivals around the country. As a student, she was hungry for knowledge about filmmaking, and as a graduate she is voracious about submitting to film festivals. She won top honors at the White House Film Festival, NFFTY Seattle, All American Student Film Festival NY, Cucaloris N.C. There are too many to list in this short article.

It was a rare opportunity for me, to see one of my former students take a giant step forward in her career. And as I sat in the Grand Rapids theater, I could not help but to imagine some of the other moments that I wasn’t able to see in person: Ali Scattergood taking an assistant editor position with Ken Burns; Aaron Jaffe’s career as a consultant and journalist; Sara Nimeh shooting her first feature film in Lebanon; Chad Engel’s promising career in makeup and special effects; and Hannah Checkley at DreamWorks Animation.

Kira is one-of-a-kind, but there are common threads among Interlochen’s filmmakers: they’re hungry for knowledge and experience and unabashedly willing to play. As I sat in the theater at the Mosaic Film Experience, I realized what kind of filmmakers we’re sending out into the world, and it was impossible not to be excited about the future of this art form.