Interlochen’s director of campus safety shares his experiences as a police officer and how he’s helping Interlochen become a safer community. 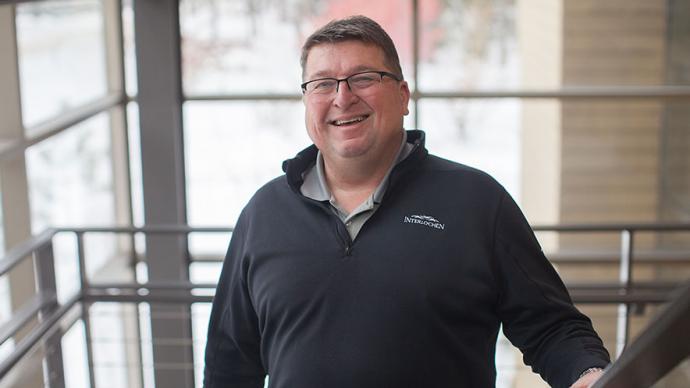 As a 29-year law enforcement veteran, Joe McCarthy knows the value of community.

During his five years as the police liaison officer at Traverse City Central High School, McCarthy honed his skills as an investigator and learned how to balance the needs of various, sometimes competing interests. But most importantly, he gained an appreciation for the role that a police officer can play in educating students and building community.

“Those were the five most influential years of my career,” McCarthy said in a recent interview.

In 2013, McCarthy’s passion for community and working with young people led him to Interlochen Center for the Arts, where he accepted the position of Director of Campus Safety. In his role, McCarthy oversees the security of a 1,200-acre campus and the safety of thousands of students, faculty, and staff.

“Interlochen has been a great spot for me personally and professionally,” McCarthy said. “I’ve really enjoyed the eight years I’ve spent here, and I’m looking forward to the future.”

Tell us a bit about your background. How did you end up at Interlochen?
I was a law enforcement officer for 29 years. I began my career in Los Angeles, and in 1987, I moved back home to Michigan to become an officer in Traverse City.

I wanted to come to Interlochen because I knew they were a great community partner. I had known some of the previous directors of campus safety; they felt that Interlochen was a great employer who really supported their efforts to make the campus safer. That has been my experience as well. I’ve been very grateful that the changes I see as necessary are well supported by the administrators.

You served in the Traverse City Police Department for 26 years and spent several of those years as a school liaison officer. Tell us a bit about that experience.
From 1990 to 1995, I was the police school liaison at Traverse City Central High School, which was the largest three-year high school in the state of Michigan at the time.

It was really a time when I could be proactive in addressing issues that affect young people. Part of that position was having the opportunity to teach students about the Fourth Amendment and other laws and rights.

It was a multifaceted position. It was a great chance to learn not only investigations, but also public relations, working with multiple groups, and an officer’s role in the community. I also had the opportunity to be the faculty advisor for Students Against Drunk Driving, and worked with the Student Senate on civic projects. I was the race director for the 24-hour relay challenge, which raised money to promote student citizenship initiatives.

I firmly believe that the school liaison officer is one of most important people on the police force. In 2012, at the end of my police career, I ran for Grand Traverse County Sheriff. Part of my platform was to return the police school liaison officer to the county schools. I believe it’s a really important role, since it’s vital for a police officer to know the people in their community.

Tell us a bit about your tenure at Interlochen. What safety measures have you helped implement on our campus?
Since I began, we have initiated a number of measures that have improved public safety. I’ve had terrific support at all levels of the organization.

For example, we upgraded from one campus speaker stanchion to three because people were not able to hear emergency messages in all areas of campus. We also moved to the Informacast Fusion program, which sends emergency messages to all phone systems, cellular phones, and computers on our network. One of the most important improvements was allowing me to expand the access to electronic control across campus. Those were great initiatives that allowed us to improve safety across campus.

On any given day, you and your team may be running tornado drills, directing concert traffic, and making bear-sighting announcements. How do you and your team prepare for the many different situations that arise on our campus?
That’s one of the best things about the job! It provides for a variety of experiences.

I think the best way to be ready is to have written responses for every situation. We have a site emergency plan for the most critical situations and policy manuals for more routine occurrences.

What’s really important is to have a great network of professionals, both in our department and across the institution. For example, the director of Interlochen Presents and the stage services manager collaborated with us to implement metal detectors for our summer concert series. We also partnered with [Interlochen’s Executive Director of Guest Services] Maureen Oleson and the Toyota Production System to learn how we can be more efficient in parking concert traffic.

We also collaborate closely with local first responders to develop working relationships with the fire and police teams. We often host training sessions for them to become more familiar with the layout of our campus in case of an emergency.

One of the most recent updates to our campus security efforts was co-sponsoring a Green Lake community police officer. Why was this such an important addition?
The biggest reason is to try to mitigate the most critical situations that might arise on campus. If we had an emergency on campus and there was not a local officer, we may need to wait too long for the police to respond. Our relationship with [community police officer] Mark Noffke is not an absolute fix, but we’re still in a much better position in terms of response time and facilitating further response.

What would you want prospective parents to know about campus safety at Interlochen?
I would want them to know that we work closely with the residence life team, and that we are committed to the safety and welfare of each student and staff member. My team is a group of dedicated professionals that works tirelessly towards that goal.